Connect with our dealer and finance partners through our site and ask for details regarding their at-home car buying services.
OK
HomeNewsBuick Regal News 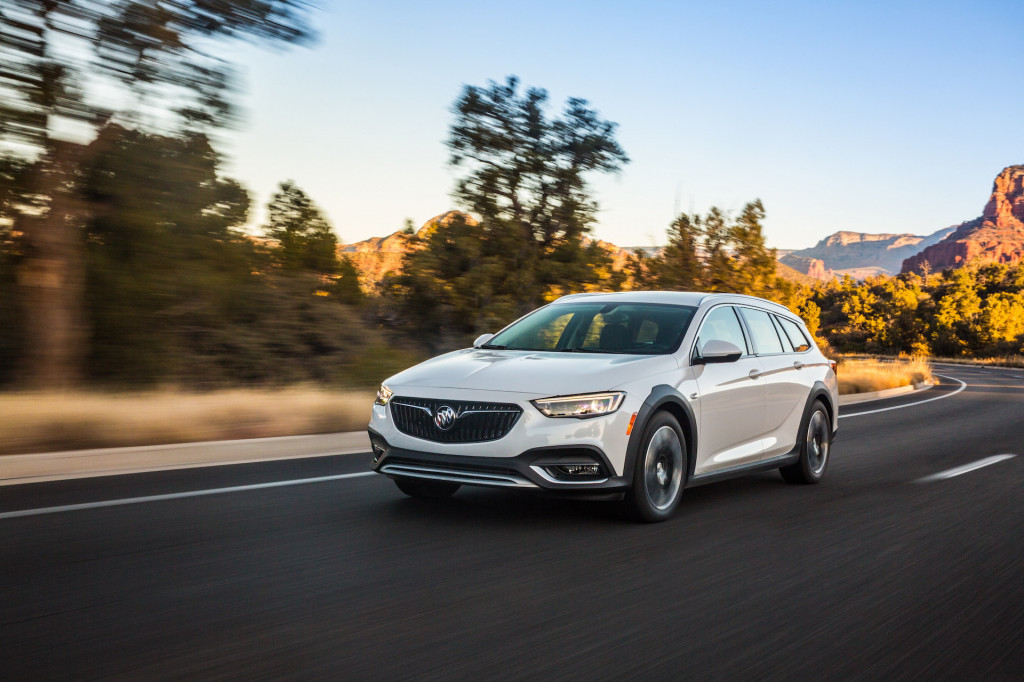 The 2019 Buick Regal Sportback Avenir strings together a lot of words that haven't always gone together. The new, range-topping 2019 Regal hatchback that Buick unveiled Tuesday is the latest to get the automaker's aspirational luxury treatment. On the 2019 Regal, the trim package mostly mirrors the...Read More»

Few vehicles boast an image as crystal clear as the 2018 Subaru Outback—a wagon version of the automaker’s Legacy sedan that went to finishing school at Outward Bound. This year, a new competitor from a most unlikely source is eager to nab a few would-be Outback buyers. Enter the 2018...Read More»

The 2018 Buick Regal TourX is a muddy vehicle. Not just because it is aimed at the hiking boot-wearing active-lifestyle set that marketers covet. Buick would like to see its new tall(-ish) wagon, which shares a nameplate, powertrain, and interior with the Regal Sportback hatchback, covered in dirt...Read More»

Are the days of the four-door sedan numbered? Take a look at the Buick stand at the New York Auto Show and you might ask the same question—especially when you go looking for the new Regal sedan. Instead, for 2018, Buick has this pair of mid-size, five-seat cars. One's a hatchback, and one's a...Read More»

General Motors is recalling 7,620 vehicles in the U.S. that may be equipped with faulty electronic park lock levers. According to a bulletin from the National Highway Traffic Safety Administration, those levers may allow drivers to remove their ignition keys without their vehicles being in "park"...Read More»

General Motors is recalling roughly 1.41 million older Buick, Chevrolet, Oldsmobile, and Pontiac vehicles to fix a potential fire hazard. According to Detroit News, some of those vehicles may suffer from leakages that could allow oil to come in contact with hot elements, like the exhaust manifold...Read More»

The 2014 Buick Regal gets a new engine, a new infotainment interface, and some reconfigured hardware when it goes on sale later this year--along with a new base price. That price is $30,615, which includes $925 in destination charges--$675 higher in all versus the least expensive 2013 Regal. At...Read More»

Today at High Gear Media, we have everything from a guide to the small and efficient Mitsubishi i electric car to a new teaser video of the upcoming McLaren P12's aerodynamics. In between, you'll find a Smart ForTwo wearing an SUV as a hat and spy shots of the 2014 Buick Regal. Oh, and there was...Read More»

The Buick Regal lineup gets considerably more fuel-efficient for 2013—with an EPA rating of 36 mpg highway that beats most other sedans its size. GM has dropped the base 2.4-liter Ecotec direct-injected four-cylinder engine on the 2013 Buick Regal and is instead making its eAssist mild-hybrid...Read More»

General Motors has issued a recall for 2012 models of the Buick Regal due to a problem with the parking lamps. According to a bulletin from the National Highway Traffic Safety Administration, parking lamps on the 2012 Regal don't illuminate when either the parking lamps or the headlamps are turned...Read More»

Common wisdom decrees that Buicks have an interior that’s silent as a tomb, with handling most often associated with ocean-going vessels. Common wisdom, then, wouldn’t apply to the new Buick Regal, which is the first Buick in recent history to add a dose of sport to its ample amounts of...Read More»

Late last night official pictures of the 2012 BMW M5 leaked onto the web. This forced BMW to make the 2012 M5 official, slightly ahead of schedule. [MotorAuthority] Do you think Lexus is trying to reinvent itself? Does it need to? [TheCarConnection] Father's day is coming; do you know what you're...Read More»

General Motors has announced an upcoming price increase on vehicles from Buick, Chevrolet, GMC and Cadillac, due largely to the increase in oil and metal costs. The automaker hasn’t provided a model-by-model breakdown yet, but states that the average per-vehicle increase will be $123. GM did...Read More»

Driving through a dealership, apparently threatening to steal, then run over, the man you're dating to convince him to buy you a new Buick Regal is daring. It also works, apparently. At least it does on this man, in a Shanghai Buick dealership. The drama unfolds, with English captions, as the young...Read More»

In today's morning mail, the Mazda Shinari--a gorgeous four-door coupe that we can't help but think would kick the RX-8 to the curb. Agreed? [MotorAuthority] The 2011 Buick Regal is one of the IIHS' Top Safety Picks this year, meaning it's earned top scores, has stability control, and meets new...Read More»