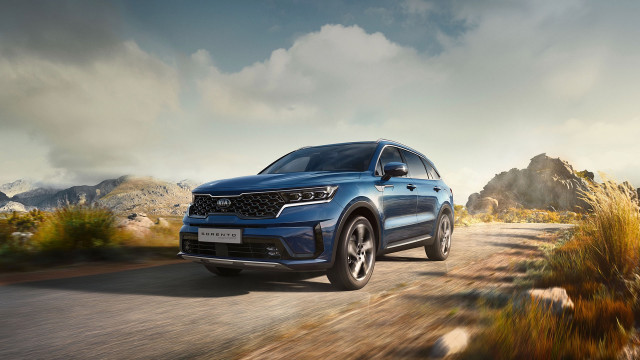 Higher-priced mid-size crossovers now get all the luxury touches, but does the 2021 Hyundai Santa Fe Calligraphy or the 2021 Kia Sorento SX X-Line do premium better?

If you’re paying more than $40,000 for a non-prestige-badged crossover, it’s hard to overlook this new duo. Still, you’ll have to look over—and past—their overstyled bodies to get to the good stuff. The new Santa Fe has a classic crossover outline, but it’s cut and stamped to excess, with lots of busy lines that try to make it look sporty. The Sorento’s frenetic in its own way, with its fillips and flags of metallic trim and its electric-razor grille. We want to tell them both to calm down. 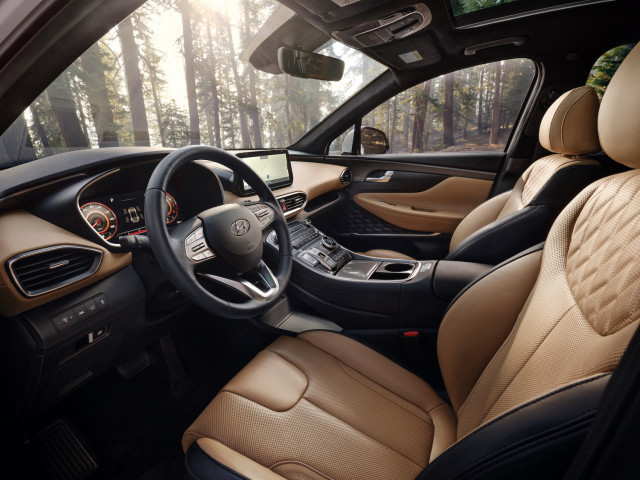 The Santa Fe may have already taken that to its heart. Its cabin wears lozenge-shaped vents, a big touchscreen, a low-set dash, and in its highest Calligraphy spec, a lovely quilted nappa leather and plush headliner that set a quiet and soothing tone. The Sorento’s still trying to come down from a caffeine buzz: its center console has a game-controller aesthetic, with bat-wing vents trimmed and lots of fingerprint-friendly gloss-black trim, even in top X-line trim. Should we drive it, or hunt for a cheat code? 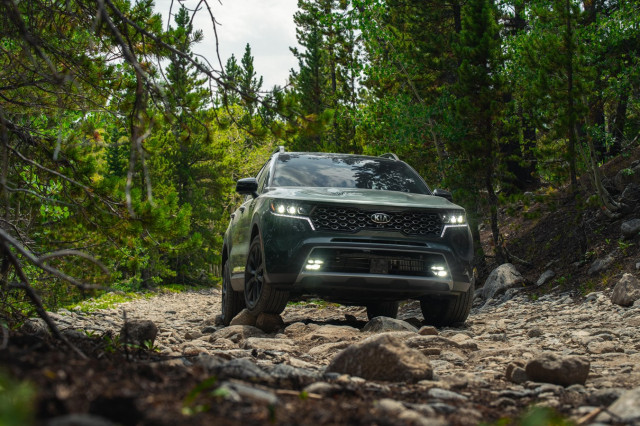 The Calligraphy and X-Line share a top-end turbo-4. The Sorento and Santa Fe still come with a base inline-4 and both now have a Hybrid edition, but the turbo-4 and 8-speed dual-clutch automatic deliver the satisfying acceleration that spendy trucks must deliver. The dual-clutch isn’t faultless, but spun into a Sport driving mode it’s eager and out to impress. Power ratings are nearly identical, at 277 hp for the Hyundai, 281 hp for the Kia. Both the X-Line and Calligraphy have all-wheel drive, and wheels sized up to 20 inches, so steering isn’t either’s strong suit; ride quality remains the best reason to recommend either. They’re both compliant and composed, though suspension noise is never more than a hard pothole away, and though both are better at high-speed damping than low-speed wheel control. 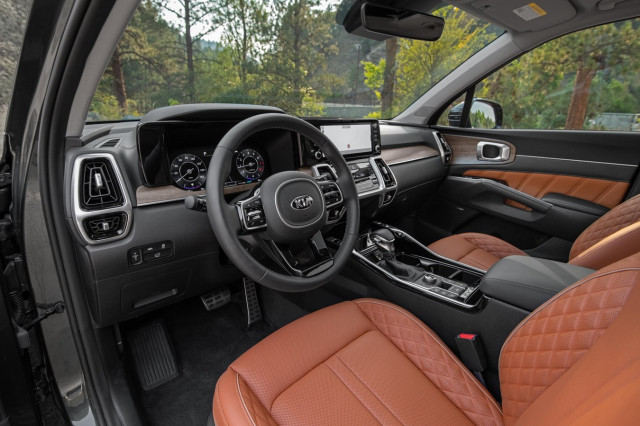 If you need to carry seven people, the Sorento SX X-Line’s the only choice here. Just make at least two of them small. The Sorento sports a teensy third-row seat that seems incapable of handling humans out of the larval stage; the Santa Fe’s a two-row for five people, without the Sorento’s second-row sliding seat or its available second-row captain’s chairs. Four adults fit in either with ease, and top leather-lined models have heated and cooled front seats, fold-away back seats, and more than 70 cubic feet of cargo space above a nearly flat load floor—not to mention available power tailgates.

Both the 2021 Sorento and 2021 Santa Fe have standard automatic emergency braking, but the Hyundai also has standard adaptive cruise control, blind-spot monitors, and automatic high-beam headlights; Kia upsells adaptive cruise control and blind-spot monitors on lower trims. The Calligraphy and X-Line models get all of that plus a head-up display and a surround-view camera system. Both also come with an exceptional 5-year/60,000-mile warranty, but the Santa Fe throws in a 3-year/36,000-mile bonus of free scheduled maintenance.

We give both crossover SUVs a 6.8 out of 10, with identical ratings in each category. They’re not so different from each other as they are from rivals such as the Ford Edge or Honda Passport, but there are critical distinctions in styling, seating, and service that shouldn’t escape any shopper. It’s up to the IIHS and the NHTSA to find a numeric difference between these two. For our cash, even without the crash data, the 2021 Santa Fe Calligraphy gets the W.

6.0
Expert Rating
The Sorento aims for top safety scores, but they’re not in yet.
Read More
9.0
Expert Rating
Safety ratings and the equipment list suggest the Santa Fe and Santa Fe Hybrid will protect you and yours very well.
Read More

*As configured. Excludes taxes, title, license and other customary fees, such as dealer documentation fees, tire and battery disposal fees and, where applicable, finance charges. By clicking on “Get Your Price Quote Now”, you agree to our Terms of Use (including the Supplemental Terms) and Privacy Policy. You further consent to being contacted at the number you provided by CarsDirect and certain participating automotive dealerships, which may include autodials, text messages, and/or pre-recorded calls; this consent is not a condition of purchase or service. Message and data rates may apply.
Have feedback about this experience?
Let us know.
Tags:
2021 Compare Cars Hyundai News Hyundai Santa Fe News Kia Sorento News
2022
The Car Connection
See the winners »
2022
The Car Connection
See The Winner and Nominees »