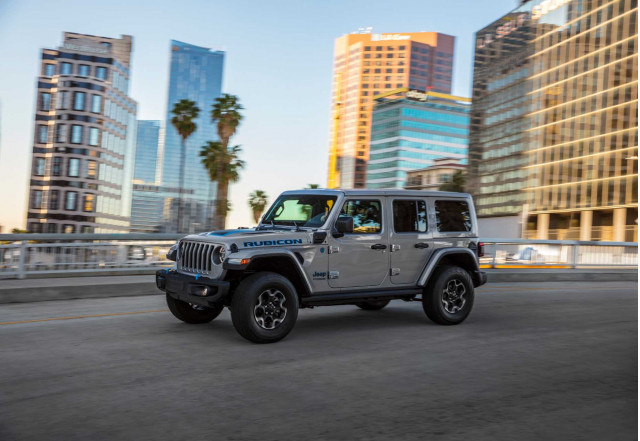 The 2021 Wrangler 4xe will appear Stateside early next year. Jeep is mum on its price, but it’s surely going to be more expensive than some Wranglers—perhaps not as expensive as others.

The plug-in hybrid Wrangler, denoted by the “4xe” moniker that will be used on other upcoming plug-in hybrid Jeeps, will be available in four-door models only, and limited to base 4xe, Sahara, and Rubicon trims.

The plug-in hybrid powertrain is somewhat familiar: it pairs a 2.0-liter turbo-4 already available in the Wrangler with electric motors and a 17.3-kwh lithium-ion battery stored underneath the rear seat. Jeep says the Wrangler 4xe should manage up to 25 miles on electric power alone and will manage a 50 MPGe rating by the EPA when it’s released. The MPGe rating, which is “miles per gallon equivalent” is a measurement of how efficient a hybrid is on electricity and gas, compared to a gas-only vehicle. Compared to Wranglers already on sale that manage about 20 mpg combined, the Wrangler 4xe will be very efficient; compared to other plug-in hybrid vehicles, including the Chrysler Pacifica plug-in hybrid minivan, the boxy off-roader isn’t very efficient at all. The minivan is rated at 86 MPGe, for example. 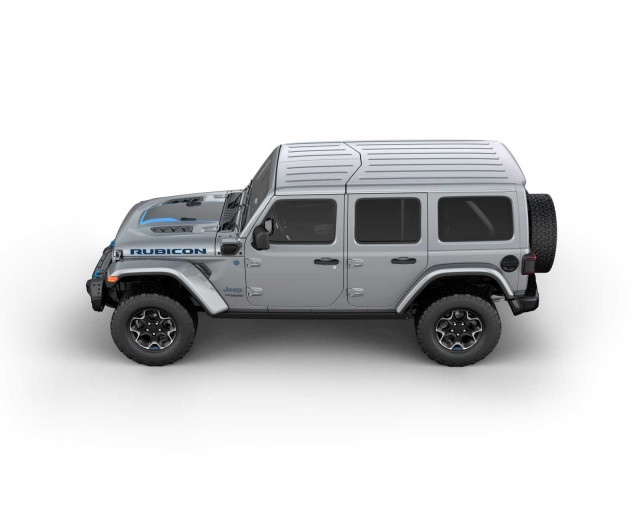 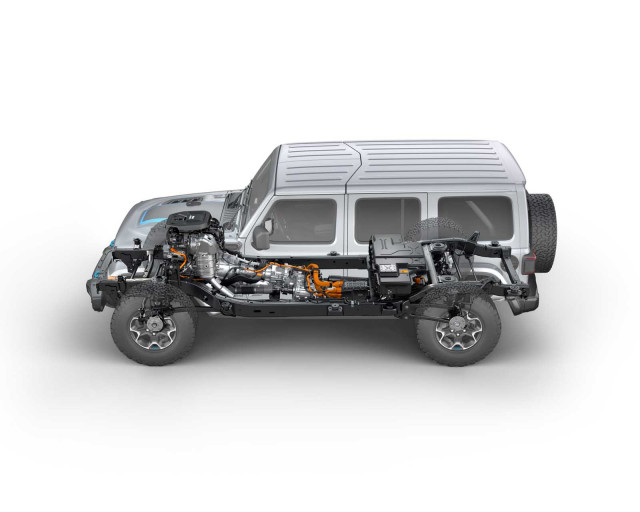 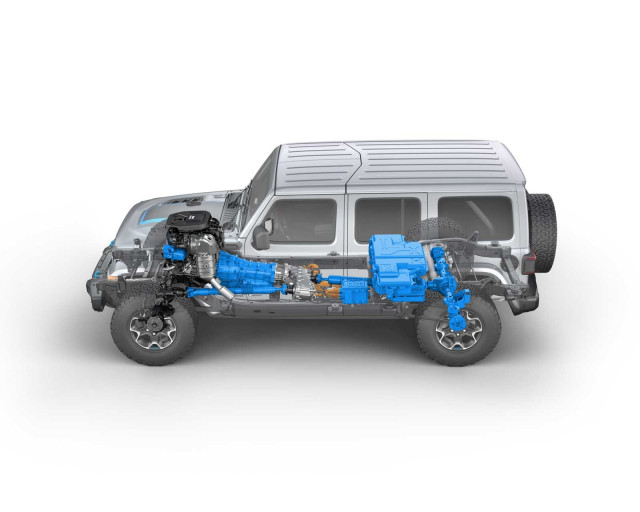 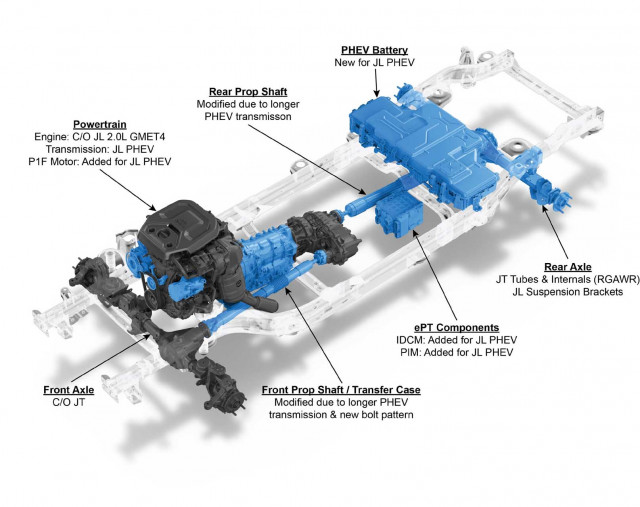 That’s because of the way that Jeep integrated the battery and electric motors into the Wrangler. The Wrangler uses two electric motors that are largely bolted into an existing powertrain—it’s integration-lite. The first electric motor replaces the starter motor and helps power accessories; the second motor clutches into the standard 8-speed automatic transmission and can power the Wrangler alone on electricity, or in conjunction with the gas engine.

With the system, nearly all of the Wrangler’s off-road credentials remain: a conventional four-wheel-drive system with low-range gearbox, solid axles, and on Rubicon models a 77.2:1 crawl ratio. When combined with an electric motor with gobs of torque, the Rubicon 4xe should be a formidable force off-road.

Jeep says the combined output of the Wrangler 4xe will be 375 horsepower and 470 pound-feet of torque, which is tops of the range so far.

Sahara and Rubicon 4xe models will be equipped similarly to their gas-powered counterparts, including 7.0- and 8.4-inch touchscreens, available leather upholstery, and uprated audio. The Wrangler 4xe “base” trim mirrors the Wrangler Sport, although it adds a standard 7.0-inch touchscreen, premium audio, 20-inch wheels, and power windows. 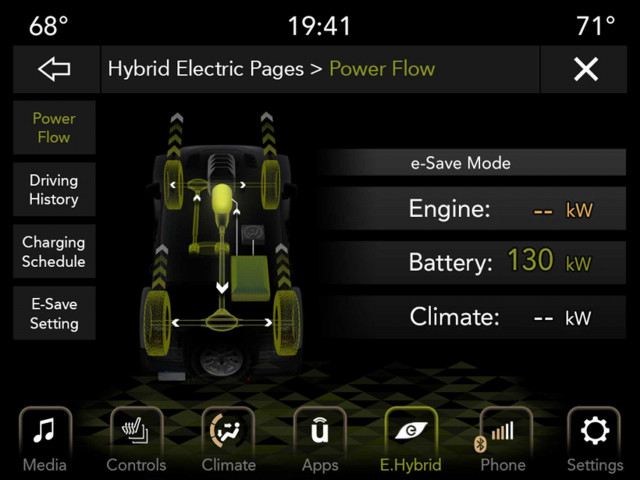 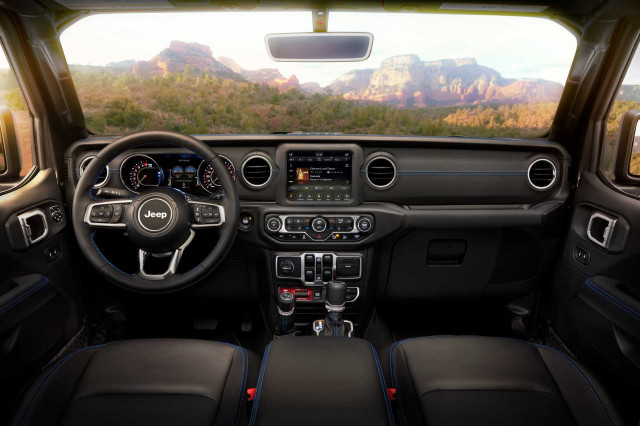 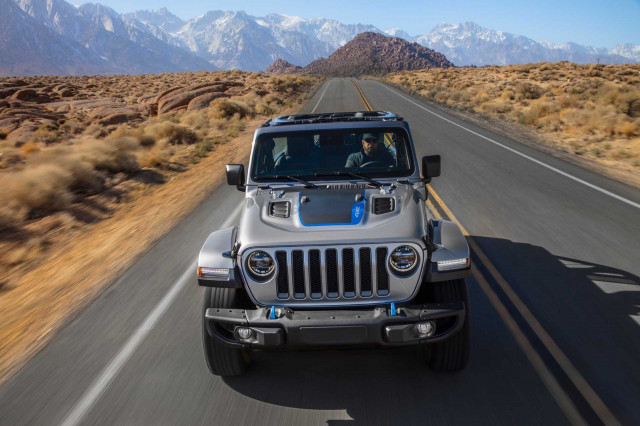 Jeep says the 96 cells are located in an accessible aluminum housing underneath the rear seat, which doesn’t intrude on passenger space. Connectors and components are waterproof, and vital converters and charger are located in a steel housing underneath the battery. On a Level 2 charger, which is common for public chargers, the Jeep Wrangler 4xe will fully replenish its battery in about two hours.

When using a battery charge mode, the Wrangler’s turbo-4 can replenish the battery in 2.5 hours at 45-55 mph; traveling from trail to trail on a paved road to preserve the battery for traversing the backcountry in all-electric modes, for example.

Aside from blue tow hooks and blue exterior accents, the Wrangler 4xe isn’t a dramatic styling departure from the Wrangler on sale already.

Like the Wrangler, the new Wrangler 4xe will be assembled in Toledo, Ohio.