The 2020 Toyota Prius Prime is a plug-in electric version of Toyota’s bestselling hybrid. It gets 25 miles of quiet electric range, and when that juice runs out it still gets 54 mpg, according to the EPA. The Prius Prime outdoes the Hyundai Ioniq plug-in to reign as fuel-efficiency champ. For now.

But with more plug-in hybrids and electric vehicles coming to market, the Prius and its variants are no longer at the vanguard of green cars. The Hyundai Ioniq outdoes the Prius Even in Toyota’s family, the RAV4 Hybrid crossover SUV outsold the Prius in 2019 to stake claim as the biggest seller. The 2021 RAV4 Hybrid rates 40 mpg combined, but it’s better than the Prius in every other category, especially design. The 2020 Toyota Prius earns a TCC Rating of 6.0 out of 10.

The RAV4 Prime plug-in hybrid promises to outdo the Prius Prime, once Toyota corrects the fuel tank issue that limits being able to fill the tank to the brim.

Yet, in a week around town and on the highway with the 2020 Toyota Prius Prime in top Limited trim, it proved worthy of consideration for urbanites with access to a plug. 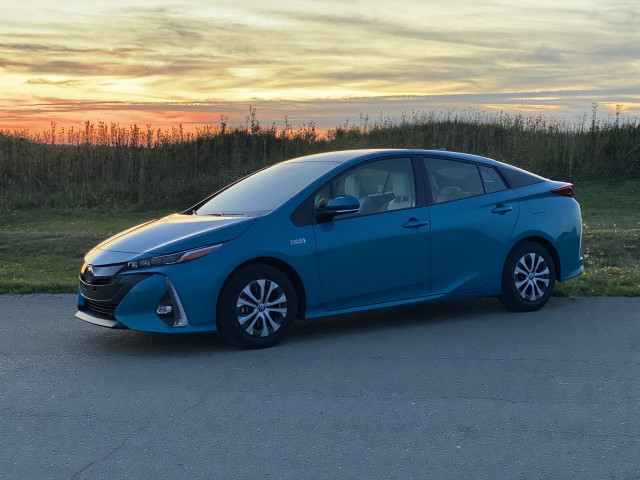 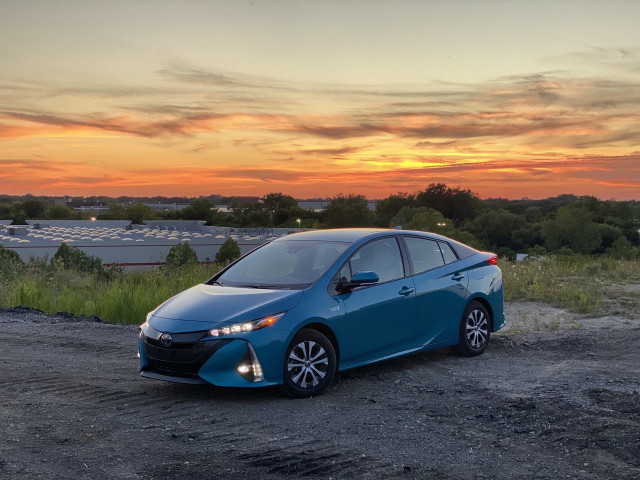 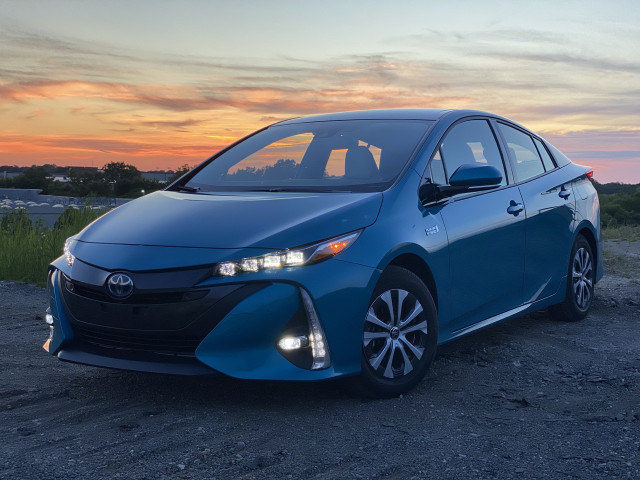 Hit/Miss: Daring to be different

For 20 years, the Prius has weathered the scorn of aesthetes who think a car should look less like a pod. Relaunched for 2017, the Prius Prime is four inches longer than the Prius to look more like a sedan and less like a pod. The rear is less bulbous, but the split rear windshield curves up in the middle like a set of lips. I imagine owners eventually get used to it in their rearview mirrors. The big change for 2020 comes on the inside, which now seats five passengers instead of four. Three rear passengers can sit stiffly over the 8.8-kwh battery pack housed beneath the seat. Inside, the Prius eschews an instrument cluster for a display wedged at the top center of the dash where the cowl meets the windshield. An 11.6-inch touchscreen dominates the cockpit like a Tesla but with...

Tesla, Toyota is not. The portrait orientation is bright and clear and defaults to a map view with a little Prius on top of the map world. A split screen at the bottom grows as you press the climate or audio function. Hard temperature buttons on the sides of the screen help, and overall it’s an improvement in an area Toyota has historically lagged in, but it’s far from great. Four circular icons overlap the map projection for deeper dives, but there’s greater accuracy hitting the home screen button instead of trying to tap on those four icons. The system can lag, and I had mixed success in hitting the intended buttons while driving. Navigation is best left to Apple CarPlay; sorry, Android users, no dice. Toyota’s voice command fidelity is awful; “north” was processed as “four” and “address” was heard as “state.” 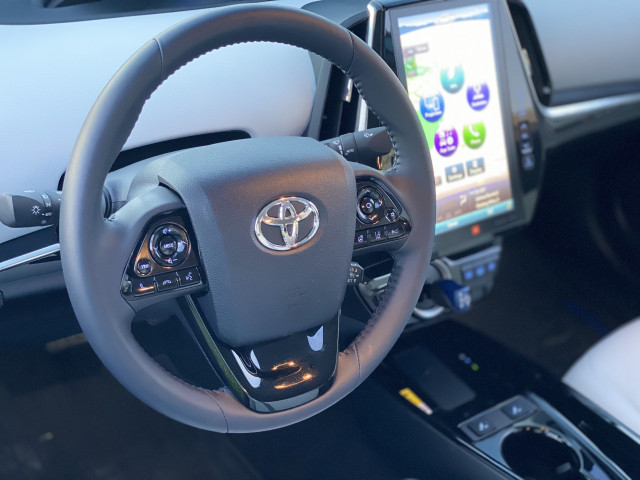 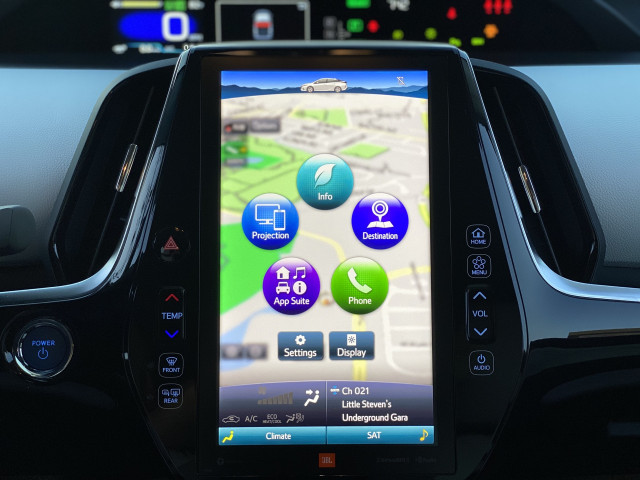 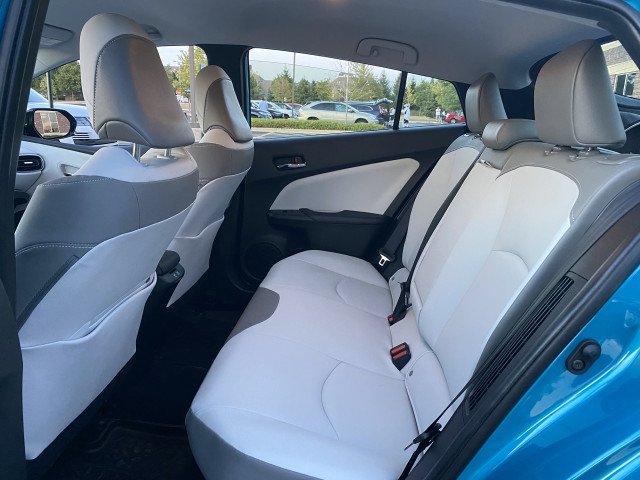 The Prius Prime excels at what it was meant to do: squeeze every bit of juice out of every drop of energy. It defaults to EV mode for 25 miles of electric range, even at speeds up to 75 mph. An EV/Hybrid mode button makes sense for highway traveling, when the 95-horsepower 1.8-liter inline-4 operates most efficiently, but there is no EV Hold button as in other plug-in hybrids that helps preserve battery power until you get off the highway. A more aggressive regen braking setting on the gear shifter recovers more energy, even when the battery is depleted. On a 300-mile road trip, starting with only 25 miles of range, it averaged 65 mpg. On a mixed commute of 57 miles, it averaged 75 mpg. In other instances where I had no battery power, it exceeded the EPA-rated 54 mpg. A similarly equipped Prius gets 52 mpg.

As long as it’s under electric power, it’s quiet. Go heavy on the throttle at an on ramp, say, and the small engine roars like an environmentalist at a forest clearing. In Hybrid mode, it’s silent traveling slower than 20 mph and gradually intensifies with more engine power. It’s enough to make you want to stay in electric power.

All that potential noise is nothing compared to the reverse BEEP BEEP BEEP. For safety reasons, in case that backward sensation fooled you for vertigo, Toyota decided to make the most obnoxious beep this side of a car alarm. It made me try to find clever ways to avoid backing up; sorry to my neighbor’s lawn. One passenger keen on the fuel economy said, “There’s too much, what is that, why does it, I could never buy this car.” Because of a beeping beep.

The 2020 Prius Prime is a relative bargain when it comes to fuel economy. There are better, roomier, more attractive plug-in hybrids (see the RAV4 Prime), but the Prius Prime stretches more miles to the gallon than its rivals.