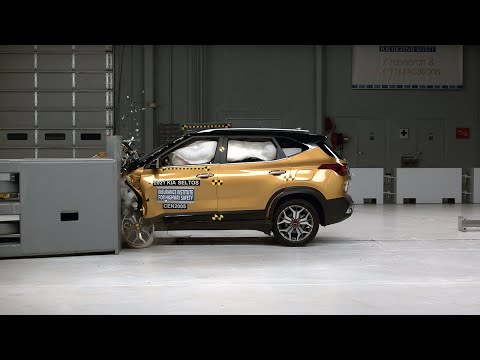 The 2021 Kia Seltos earned top marks in all crash tests, including the notoriously difficult driver- and passenger-side small overlap crash that simulates the car striking a smaller object such as a light pole or tree. The small crossover also earned top "Good" scores for rollover, moderate front impact, and side impact crash safety.

Kia uses two automatic emergency braking systems in the Seltos and both were rated "Superior" at avoiding forward crashes with cars and pedestrians. The first system, which is standard on S, EX, and S Turbo trims uses radar only and avoided forward crashes with a vehicle at 12 and 25 mph. The same system significantly slowed the Seltos before striking a simulated adult or child crossing the road or walking parallel to the road.

Automatic emergency braking is not available on base Seltos LX models at all.

Regardless of trim level, the IIHS said the headlights on the Seltos were "Poor" at illuminating the road ahead. Specifically on the top Seltos SX, the IIHS concluded that the low-beam LED headlights were inadequate on both sides of the road. Halogen reflectors fitted to Seltos S, EX, and S Turbo adequately illuminated the right side of the road, but not the left.