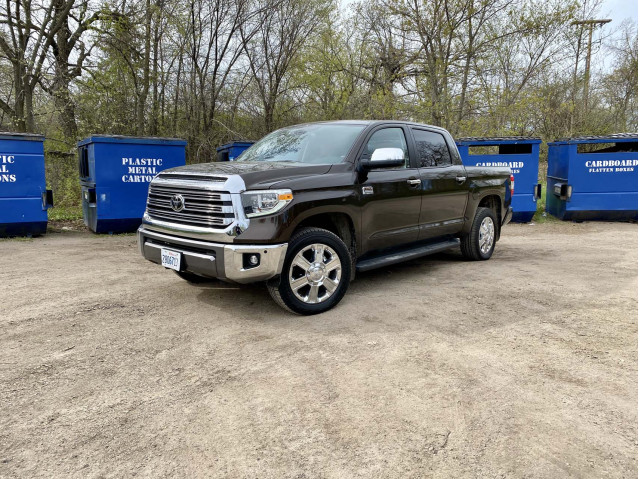 Does a pickup truck need a head-up display, 12.0-inch touchscreen, or an 8.0-inch LCD screen in the gauge cluster? Does the bed need fancy storage containers or a reconfigurable tailgate?

These are the questions the Toyota Tundra poses. The Tundra’s far more basic and offers none of the features listed above. The competition sets itself apart with nifty party tricks and luxury-like features. Is that what you need, or even want, in a pickup truck?

With a TCC Rating of 4.7 out of 10 the 2020 Toyota Tundra wins with healthy V-8 power and a comfortable interior, but it guzzles gas, has a mediocre infotainment system, and can ride like a lumber wagon.

The Tundra has been around in its current form since 2006, but the newer, flashier competition hasn’t completely left it behind. I spent a week hauling a bed, boats, mulch, kids, and food to determine where the 2020 Tundra hits and where it misses. Here’s what I learned. 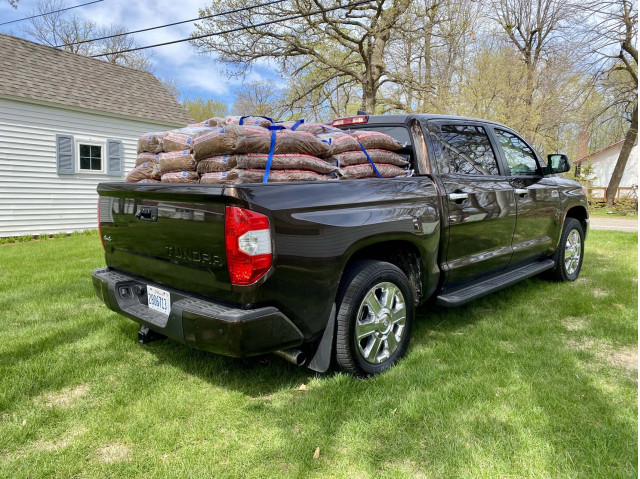 Hit: I can reach that!

Put something in the bed of a Ford F-150, Chevrolet Silverado 1500, or GMC Sierra 1500 and try to reach over the bedside to get it. Good luck. Those trucks have become so focused on capacity and volume they’ve lost functionality and convenience, with the exception of the Multipro tailgate on higher Sierra trims. The barn doors built into the Ram 1500’s Multifunction tailgate is pretty cool, too. But, back to bed sides. The Tundra’s bed sides are low enough that an average-sized person can reach a bag of mulch from the middle of the bed and pull it to the side before lifting it out. My back flinches remembering what I did after I unloaded those 50 bags of mulch.

While the beds of the Silverado 1500 and Sierra 1500 are deeper and can hold more, their top rail design makes it a tight squeeze to slide a queen-sized mattress into the truck bed. The Tundra’s rail bed design allows a queen-sized mattress to easily slide down into the bed and rest hanging over the tailgate (with straps to ensure it wouldn’t go anywhere). 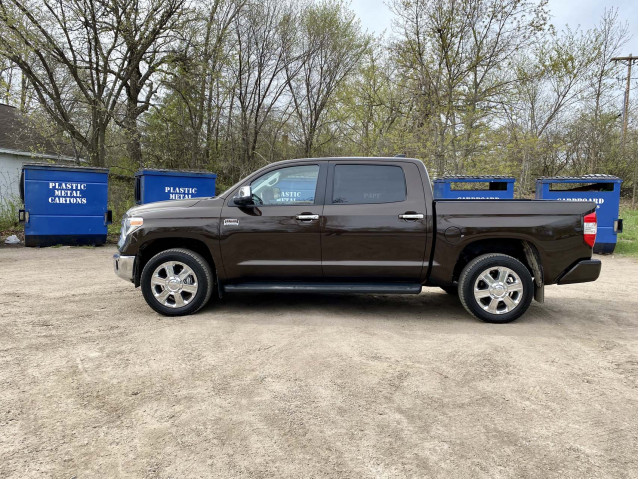 Miss: Is this a lumber wagon?

Pickup trucks aren’t required to ride like a luxury car—though the 2020 Ram 1500 in upper trims does a darn good imitation—but when unloaded the Tundra might as well be a lumber wagon. Cruising down I-94 from northern Minnesota, the unladen Tundra would buck and hop over every expansion joint that endured the last dozen winters. Around town a large pothole could shake loose a cavity filling. The competition moved forward in terms of ride quality without sacrificing capability. The F-150 features a similar suspension setup as the Tundra but has undergone many tuning updates. The Tundra is stuck in 2006. 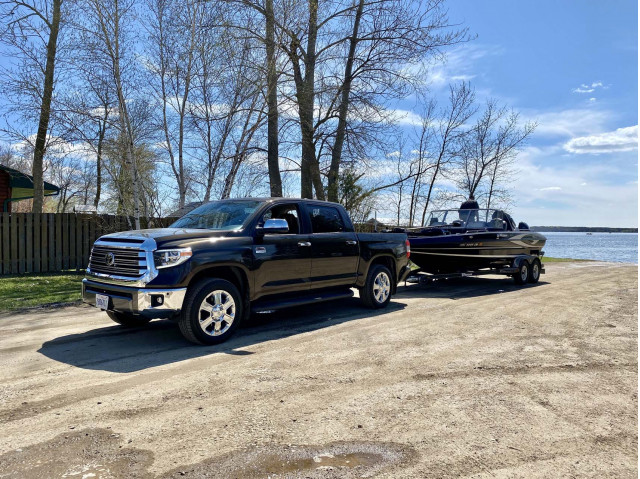 Every 2020 Tundra is powered by a 5.7-liter V-8 engine with 381 horsepower and 401 pound-feet of torque. The 6-speed automatic transmission is down a few cogs compared to the competitors’ more efficient transmissions, but it does a good job keeping the engine in its power band. When properly equipped, the Tundra’s rated to tow up to 10,200 pounds. During my week, it towed 5,000 pounds of boat and trailer without flinching. Power was more than adequate with confidence-inspiring acceleration. 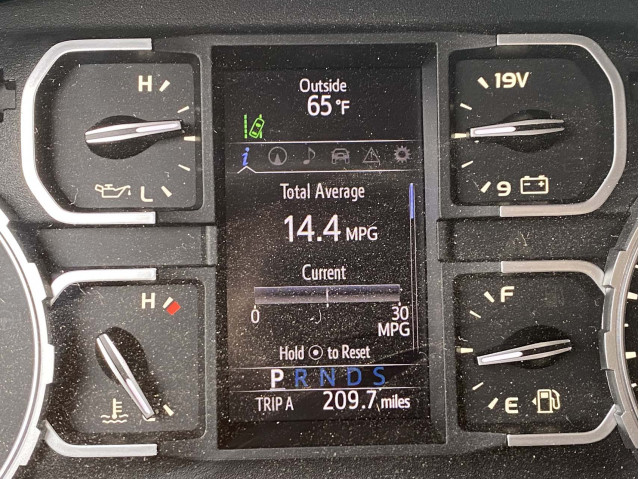 A friend recently told me that expecting good fuel economy out of a full-size pickup truck is ridiculous. I disagree because nearly every competitor’s V-8 easily gets better fuel economy with the same or more power. The fact is the Tundra’s fuel economy is abysmal with EPA ratings of 13 mpg city, 17 highway, 14 combined. Around town I saw an average of 13 mpg, which matched up exactly with the EPA ratings. Highway fuel economy fell short of the EPA ratings, on average. The 2020 Ram 1500 V-8 in four-wheel drive gets 17/22/19 mpg. A similarly equipped 2020 F-150 gets 15/21/18 mpg. 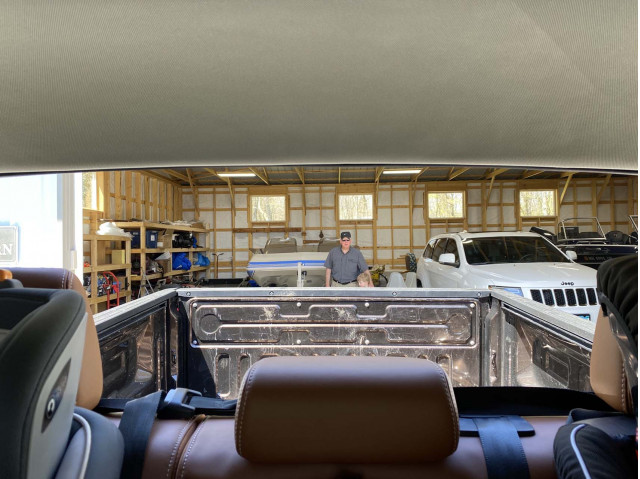 The Tundra has a key feature that some would call “a switcher,” which is one of those features that would, or should, cause a consumer to pick it over the competitors. Every full-size pickup truck has some sort of power-sliding rear window in the back of the cab, but the Tundra’s the only truck on the market with the entire rear glass power-sliding down into the back of the cab. It’s a switcher. With nearly every other pickup or SUV I have to call my father on a cell phone and talk via Bluetooth as I back up a trailer for directions so as to not hit the gate against the back of the trailer. The Tundra allowed me to simply roll down the entire back glass and talk to my father sans phone with one flick of a switch. 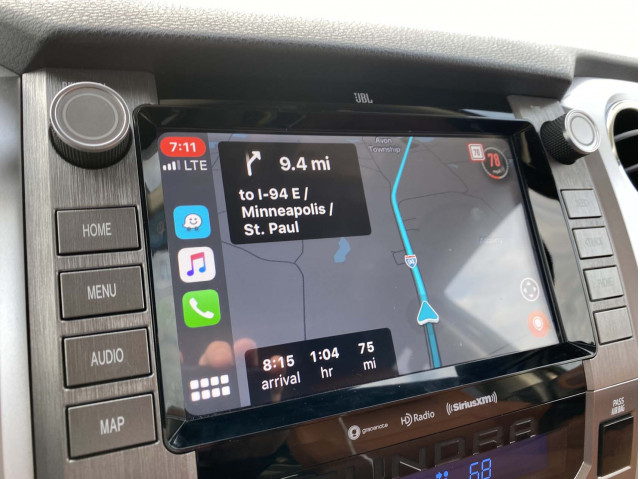 Toyota’s 8.0-inch infotainment system isn’t great. It’s not the worst—looking at you, Lexus—but it’s far from the best. The interface looks nice enough with large virtual buttons complemented by hard buttons and a volume knob, but the integration of Apple CarPlay is half-baked. The volume for navigation and music isn’t split out, which leads to you choosing whether you want the navigation directions shouted at you or you want to strain to hear your music. Nearly every other automaker splits out the audio and navigation volume for independent adjustments. 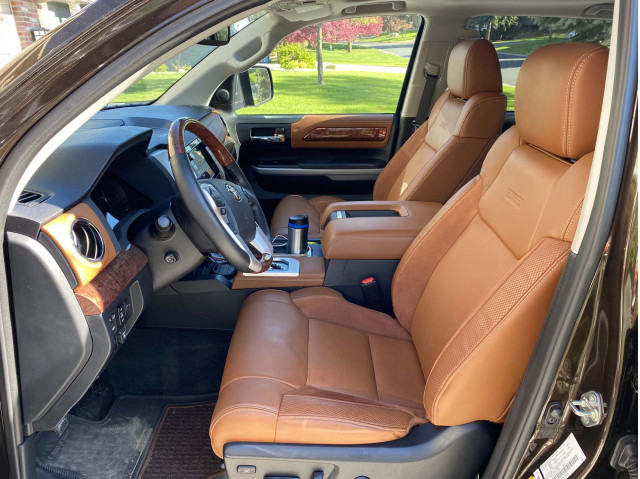 No matter where you’re seated in the four-door Tundra crew cab you’ll have plenty of stretch-out space. The front buckets are akin to overstuffed thrones while the rear bench is a simple yet supportive affair. The rear seat bottoms flip up for hauling larger items in the cab, but it’s not a completely flat floor with the bottoms up, and there’s no ability to store items under the rear seat bottom as you can with other trucks as it meets the raised floor. 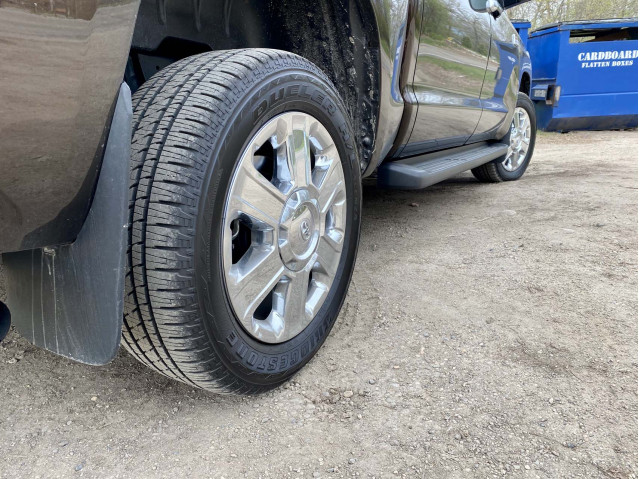 The 1794 Edition Tundra comes standard with 20-inch 6-spoke aluminum wheels. They aren’t spectacular looking, but they aren’t horrible. The Tundra I tested was equipped with ugly 20-inch 6-spoke chrome-clad wheels for $345. Aside from looking like something from an AutoZone shelf, if one of these chrome discs gets scraped on a curb it will expose the plastic wheel covers that are bound to the aluminum wheel. They look cheap, feel cheap, and aren’t with the times.

The 2020 Toyota Tundra 1794 Edition is far from the most advanced pickup truck on the market, but it’s the only full-size pickup to be recommended by Consumer Reports for reliability, has some trick features, and is capable of getting the job done. So, do you actually need a large touchscreen, head-up display, or fancy tailgate in your pickup truck? If not, the Tundra could be the one.