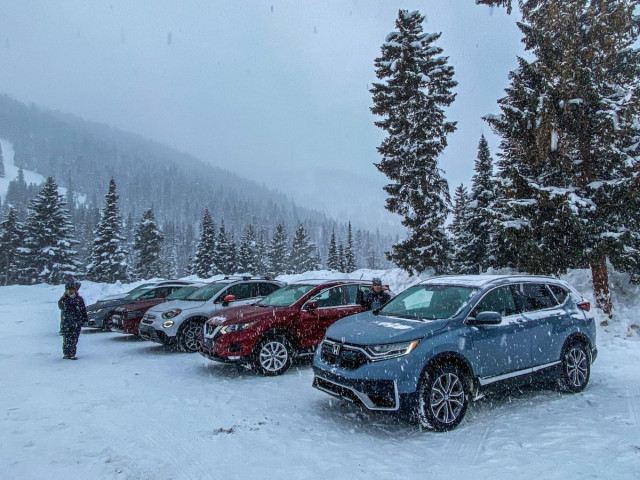 For drivers in cold and wet weather states, the availability of all-wheel drive can drive car shopping decisions. Is AWD worth the upcharge over front- or rear-wheel-drive vehicles? And are crossover SUVs the only option?

We tested six popular models in a snow-filled parking lot at 9,000 feet above sea level in Winter Park, Colorado to understand how the various AWD systems work and how the vehicles behave in the slickest conditions.

Despite the wide array in test vehicles, they all had snow tires, electronic stability control (ESC was mandated on all vehicles since 2012), and could split engine torque between the front and rear wheels. Snow tires typically provide more traction in winter conditions than any all-wheel drive system. ESC sensors brake the wheels that are losing grip to help correct the vehicle’s direction. Naturally, we tested the vehicles with it on and off.

With snow falling and visibility diminishing in a snow-glazed parking lot over the better part of a day, these AWD systems profoundly helped with grip, cornering, and minimizing understeer, which is the tendency for vehicles to plow ahead even with the wheel turned in a different direction.

We learned some insights, mostly that turning earlier allows for more room to correct, and had some fun, mostly conjuring up memories of power-sliding Dad’s car in a snow-covered lot as teenagers.

The only all-wheel-drive four-door muscle car was the belle of the snow ball. The AWD Charger GT is powered by a 300-horsepower 3.6-liter V-6 with an 8-speed automatic transmission mostly powering the rear wheels. It has an active transfer case that disconnects the front axle for performance driving but also improves fuel economy over a permanent AWD system. Pushing the “sport” button activates AWD full-time, or the driver can rely on sensors that trigger AWD in three conditions: if it’s colder than 40 degrees, if the windshield wipers sense rain, if slippage is detected.

Activation of the AWD system is unnoticeable and smooth. The heavy Charger had plenty of whip and slide that reared its head in the autocross section, where drivers hammered the throttle from a stop then made a 180-degree turn at speed before serpentining through three sets of cones to the finish. The Charger accelerated in a straight line, even as the snow tires scrambled for purchase. At the turn, the Charger GT didn’t plow as much as a front-drive car and didn’t rotate as much as a rear-drive car. In the best case scenario, it slid, and feathering the throttle through the slide brought it back into the serpentine. Small turns to the steering wheel enabled the AWD system and brake torque vectoring work in concert to correct the overcorrections. It took a few tries to find this delicate balance, and one thing proved true: Too hard on anything, steering, brake, or gas, and physics takes over. This is true in any vehicle.

When we shut off the ESC on the same autocross, the Charger GT was a fish out of water, flipping and flopping its tail until the driver learned the most delicate approach in and out of the turn. Otherwise, AWD instills confidence, and the snow tires provided the grip to see it through the kind of challenges you likely won’t see in the real world. 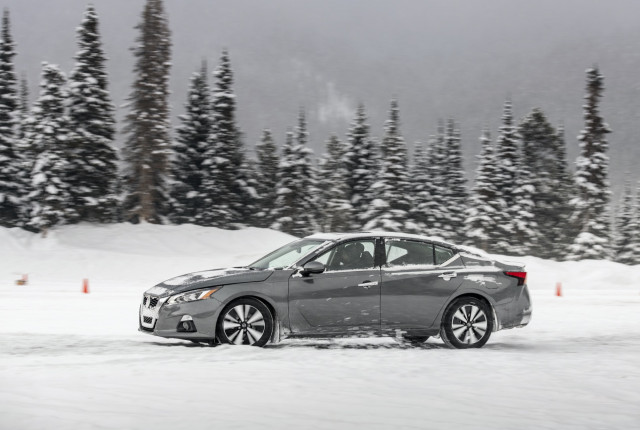 The other sedan on the course performed competently and capably. For 2020, the Hyundai Sonata and Toyota Camry join the Altima and Subaru Legacy as mid-size sedans with all-wheel drive, and offer shoppers alternatives to crossovers. On the course, the Altima surprised with its overall composure. Even when intentionally pushed beyond its limits, the Altima’s front-drive bias felt in control and eager to correct. Once it started to plow, or understeer, the rear wheels picked up grip and helped bring the sedan back into the desired angle. When the system detects slip, it sends up to 50 percent of the torque to the rear wheels, and either rear wheel can get all of that share. All-wheel drive adds about 120 pounds yet only loses 2 mpg to 30 mpg combined versus the front-drive model. It can only be had with the 2.5-liter inline-4 engine. 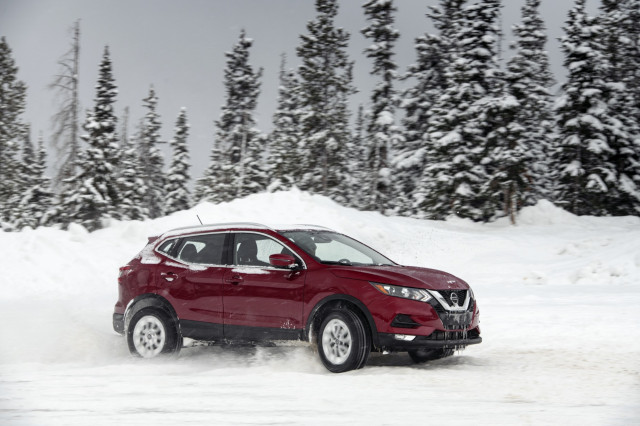 The small crossover showed the smallest gap between having ESC on or off. Employing the same setup as the Altima, the taller ride height and slightly heavier size of the Rogue Sport didn’t return the same sense of composure. However, most car owners won’t hammer the throttle to see how high the snow can go. The Rogue Sport handled just fine in the portion of the course that replicated everyday driving conditions, with quick lane changes, abrupt stops, and a hard right angle turn. 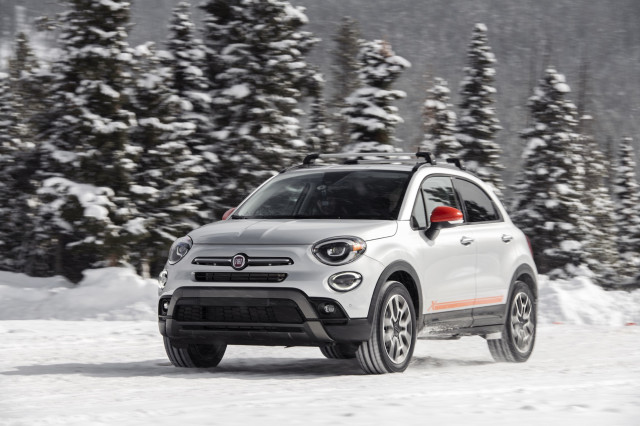 It had roof rails, snow tires, AWD, and great outward vision. This was Colorado, but this was not a Subaru. Once turbo lag in the 177-hp 1.3-liter turbo-4 was overcome, the 500X provided one of the more polarizing drives on the course. Some drivers kept at it, unable to find that balance between power and grace, while others found it more natural. We found this mechanical brother to the Jeep Renegade surprisingly easy to stay the course. The more time we spent behind the wheel, the more we improved on hitting the snowy apexes in the initial S curve. Opposite of the Charger GT, the 500X disengages the rear axle when it’s not needed, making it a front-drive vehicle unless it is in sport mode, traction mode, or when auto mode detects irregularities in the wheels. It’s also all-wheel drive accelerating from a stop. The 500X was at its best weaving between three sets of cones at about 30 mph, which was meant to simulate quickly veering from something falling in roadway or another car veering in your lane. 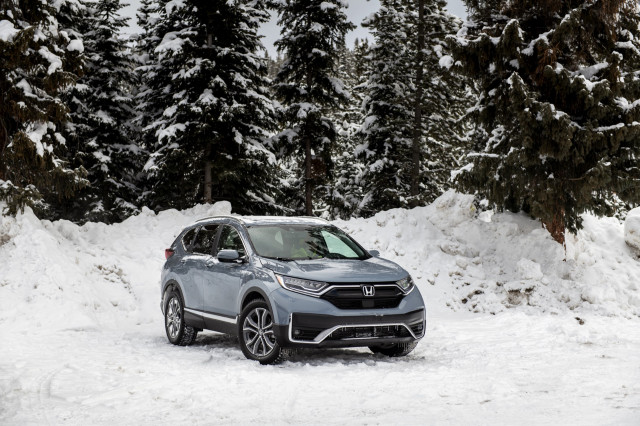 All-wheel drive makes up 70% of CR-V sales on average, according to Honda spokeswoman Natalie Kumaratne. What was surprising was how quickly the CR-V got off the line and stayed planted, despite having one of the more basic systems. When losing traction in the front wheels, sensors will send torque to the rear differential, which moves the rear wheels. That’s pretty much it. Yet, it handled the serpentine with ease, and the plowing could be limited in the 180 degree turn by easing off the throttle and feathering the steering to shift the weight to the outside to help send the CR-V around. 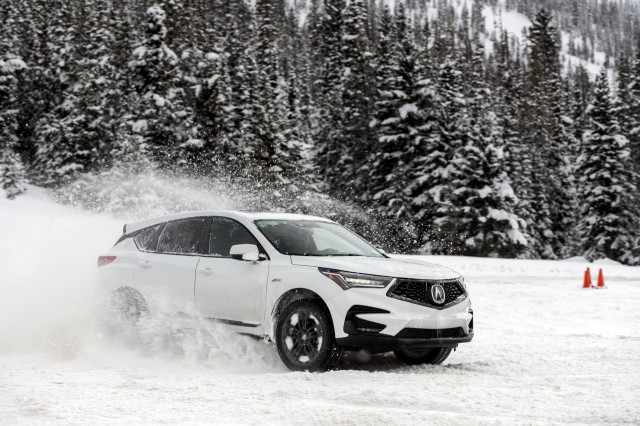 The stylish compact crossover uses a bunch of letters to represent the most sophisticated AWD system at the Winter Driving Encounter. Super- Handling AWD, or SH-AWD in Acura speak, differs from the inexpensive brake-based torque vectoring on most other AWD systems by using a center differential with dual clutch packs that can send up to 70% of torque to the rear axle, then move all of that rear torque to the left or right, depending on how much they are slipping. Sensors read steering, throttle, and brake inputs to predict your intended direction, and help to correct. The back-and-forth slalom course through the three sets of cones demonstrated how effectively the system corrects with the straightest line and the least amount of effort and anxiety on the part of the driver. With ESC off in the last course of the day—essentially time to make the donuts by channeling our inner teens—too much steering effectively cut power to the gas pedal. On roadways, this is genius, because no matter the physics, at least the car can’t be accelerating. On this closed course, however, it felt like Dad was watching.

The Winter Driving Encounter was produced by Rocky Mountain Redline and sponsored by participating automakers, who provided airfare and lodging to bring you this firsthand report.