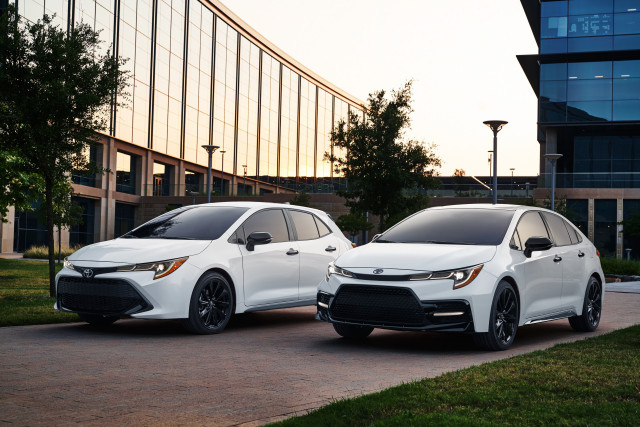 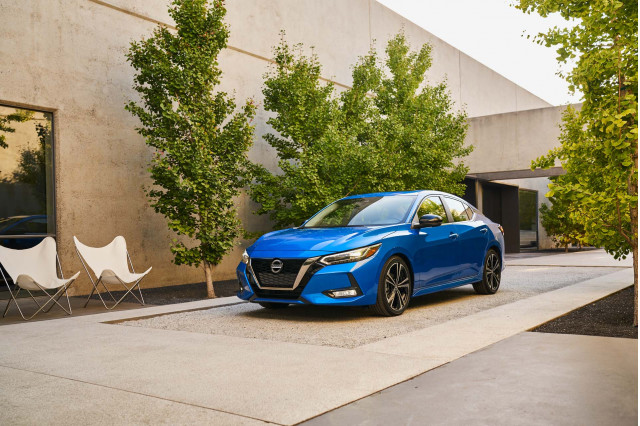 The Toyota Corolla and Nissan Sentra have been around so long it’s easy to take them for granted. In fact, the Corolla and Sentra nameplates were born long before the majority of shoppers of compact cars. Launched in the U.S. in 1982, the Sentra has become the best-selling vehicle for Nissan over time. The Corolla, which launched for 1968, is not only Toyota’s best-selling since then, it is the world’s all-time best-selling passenger car, according to Toyota.

With domestic automakers ditching the compact car, the 2020 Toyota Corolla and 2020 Nissan Senta represent two of the best compacts, and both were redesigned for 2020. The new Sentra cuts a sportier profile and lifts the compact above the budget buy compromise, while the new Corolla accomplishes the same objective by loading it with more standard features and safety equipment.

Since we don’t have crash test ratings for the Sentra yet, the Corolla pulls away on safety, which helps it earn a TCC rating of 6.7 compared to the Sentra’s 5.8. We expect the Sentra to perform as well if not better than its predecessor on crash testing, so once those findings are in, the numbers will be much closer.

The 2020 Nissan Sentra is more sharply styled than the comparatively bland Corolla sedan. But the Corolla hatchback has both style and versatility, which the Sentra can’t match because it  comes as a sedan only.

The Sentra rides on a new platform that is 2 inches lower and 2 inches wider, and the overall design suggests more fluidity to match the stronger engine and sportier suspension over the outgoing model. The top SR trim is the sharpest of the three trims, with 18-inch alloy wheels, a rear spoiler, and black on chrome trim elements. The SV and S models ride on 16-inch wheels. 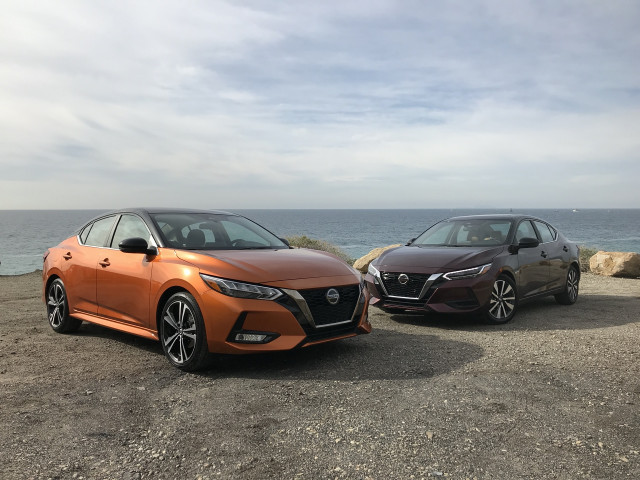 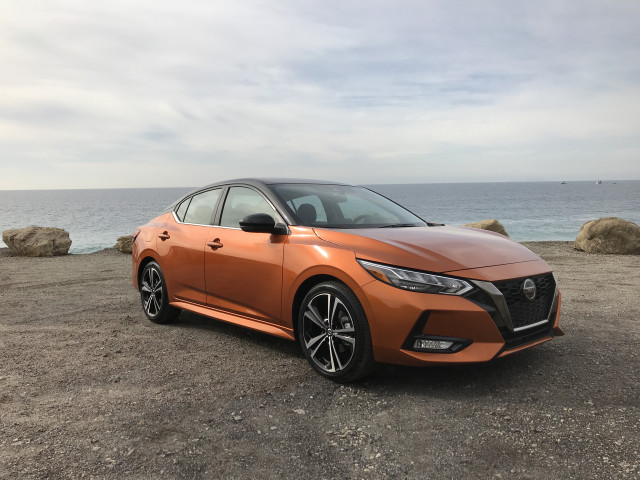 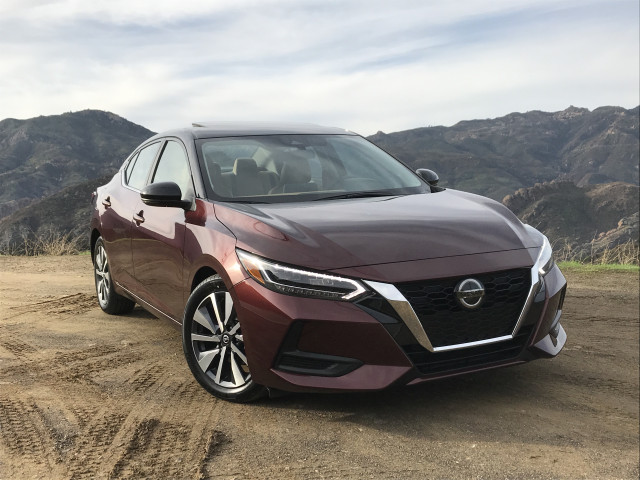 While Toyota design has become edgier (check out the winning RAV4), that memo didn’t flow all the way down to the Corolla. The hatchback has subtle European styling cues and a more potent powertrain, but the sedan takes a more proletariat approach, even with the menacing wide-mouth grille.

Yet the Corolla offers a wider range of powertrain choices. The base engine in the sedan is the carry-over 139-horsepower 1.8-liter inline-4 with a continuously variable automatic transmission (CVT) powering the front wheels. It’s relatively quiet and efficient, netting 29 mpg city, 37 highway, 32 combined.

For Prius-like efficiency, Toyota adds the Corolla hybrid sedan rated at 53/52/52 mpg. It uses the same 1.8-liter inline-4, but here it is teamed with two electric motors  to make 121-hp, same as the Prius. It’s slow, but this turtle wins the race when it comes to overall value.

For modest performance improvements, the hatchback’s base engine is a 169-hp 2.0-liter inline-4 that is also available on the SE and XSE sedans. It’s paired to either a 6-speed manual or CVT, the latter of which can strain under heavy feet. The manual feels right in the hatch, and rev-matching smooths out the downshifts. But it also takes the biggest bite out of fuel economy, at 28/37/31 mpg. With a CVT, it gets 32/42/36 mpg; in XSE trim with the CVT, it falls to 30/38/33 mpg.

The 2020 Nissan Sentra is a much simpler proposition. It comes with one much improved powertrain. The 149-hp 2.0-liter inline-4 with a CVT produces 146 pound-feet of torque, which represent respective improvements of 20% and 17% over the outgoing model. Fuel economy improves from 32 mpg combined to 29/39/33 mpg in S and SV trims; the heavier SR trim drops it to 28/37/32 mpg.

The Sentra is neither quick nor fast, but the new independent rear suspension combined with the lower ride height gives it a fun-to-drive factor absent on the last Sentra and the Corolla sedan. Outward vision is great due to the high windshield, but that gets pinched at the sides and rear.

The performance advantage goes to the Corolla hatchback, though the Nissan Sentra sedan outperforms the Corolla sedan in handling, responsiveness, and ride quality. 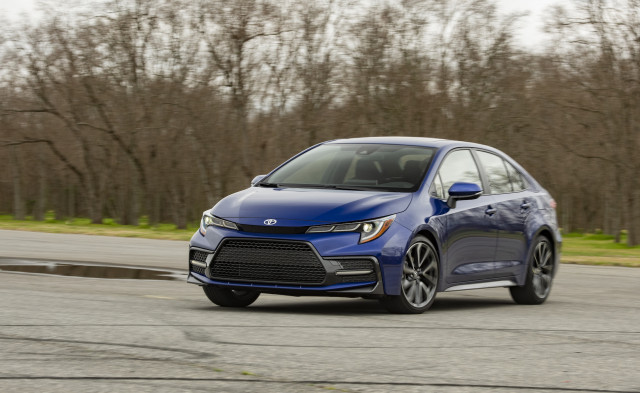 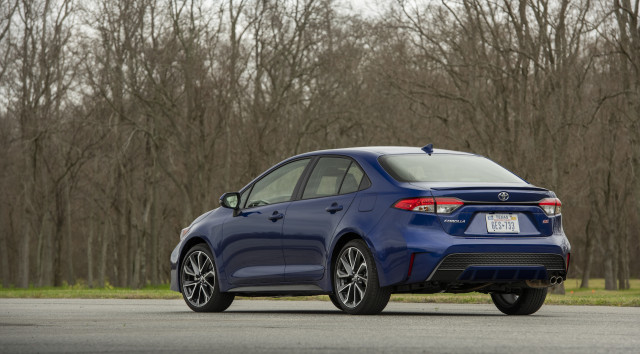 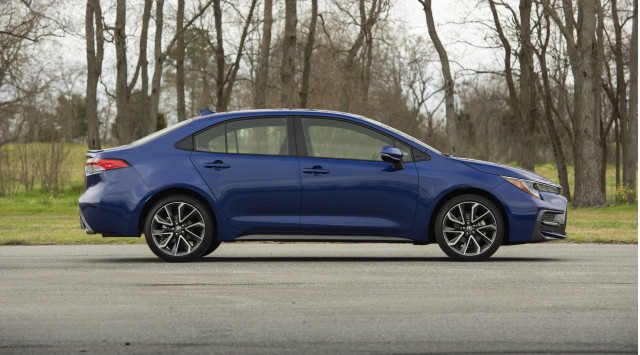 The sporty vibe of the 2020 Sentra carries over inside, where even the base S trim gets a flat-bottomed steering wheel and three circular air vents borrowed from the Nissan GT-R. A 4.2-inch vehicle information display is standard, as is a 7.0-inch touchscreen and a USB port.

Quilted leather seats (a premium touch in an economy car), as well as heated seats and a heated steering wheel, are part of the Premium Package, which is available on the SV trim for $2,460 and the SR trim for $2,170.

The $21,195 SV trim hits the sweet spot for features, and is just $1,180 more than the base S trim. That upcharge upgrades to three USB ports, an 8.0-inch touchscreen, Apple CarPlay and Android Auto compatibility, adaptive cruise control, upgraded cloth seats, and a 7.0-inch digital vehicle info display. That’s a lot of amenities for a reasonable price.

The Sentra’s rear seats are roomy enough to fit two six footers, and the increased toe room under the front seats means you can manage road trips without complaint. The trunk is wide and deep, offering up an above-average 14.3 cubic feet of storage.

Toyota also equips every Corolla with standard safety features including automatic emergency braking, adaptive cruise control, high-beam assist, and active lane control. A ton of value is baked into both of these compacts due to the standard safety gear.

The comfort levels of the Corolla are a tale of two seats. Front seat accommodations offer more space and comfort than much larger and more expensive vehicles, including SUVs, but the rear seats cause six-footers to hunch over. The hatchback is smaller than the sedan, but the cargo volume is much better at 18 cubic feet compared to 13.1 in the sedan. The hatch is the way to go for couples who are weekend adventurers, while the Sentra is better for the driver who might have to lug around friends. 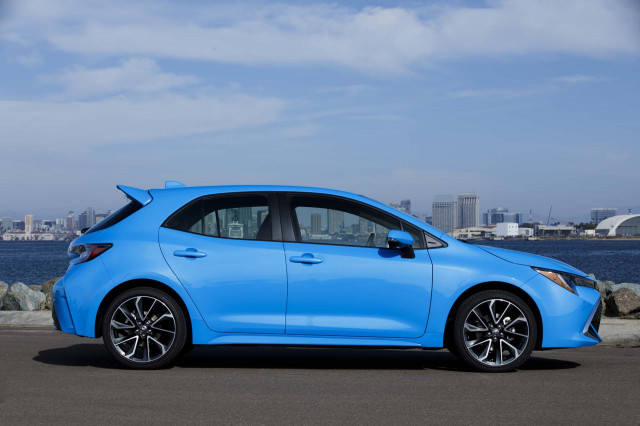 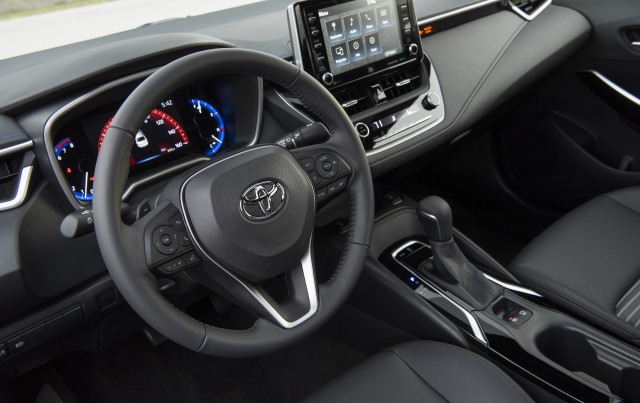 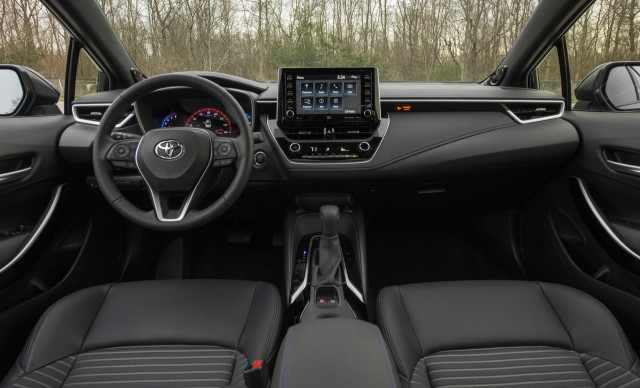 The Corolla, however, comes better equipped, with a 7.0-inch touchscreen, Apple CarPlay compatibility as standard, and Android Auto forthcoming. It’s offered in L, SE, or XSE trim, with three different engines, two different transmissions, and two body styles. Near the top of those choices is where we find the most value, with the $25,295 XSE hatchback, which adds an 8.0-inch touchscreen, 18-inch wheels, synthetic leather upholstery, power heated front seats, blind-spot monitors, satellite radio, fog lights, and dual-zone automatic climate control. Of course, if fuel economy is your main concern, the $23,880 Corolla LE Hybrid is the way to go.

In the end, these compacts are more similar than different. For a little more sport, roominess, and value, the 2020 Nissan Sentra makes a compelling case. For hatchback versatility or hybrid efficiency, the 2020 Toyota Corolla is hard to beat.

6.7
Expert Rating
It’s still among the more mildly flavored mass-market sedans, but the 2020 Toyota Corolla has dropped the bland from its diet.
6.0
Expert Rating
The 2020 Nissan Sentra is sportier and better equipped but is still a value.

Front Wheel Drive Read Full Specs
Front Wheel Drive Read Full Specs
Compare Free Dealer Price Quote
With competitive price quotes from multiple dealers, you will be prepared when you meet your local car dealer. Please tell us how to contact you so that dealers can compete for your business!
2020 Toyota Corolla
There are no Toyota dealers in our network that are located near the ZIP code.
2020 Nissan Sentra
There are no Nissan dealers in our network that are located near the ZIP code.
Thank you!
We have sent your request for price quotes on the 2020 Toyota Corolla and 2020 Nissan Sentra to the dealers you requested. They should be in touch shortly.
The Car Connection's dealer quote process is powered by our partner site CarsDirect.
Your request for a fast, free price quote on a 2020 Toyota Corolla and 2020 Nissan Sentra is in process. The CarsDirect Dealer(s) listed below will contact you shortly to discuss your request and to provide a quote. If you have questions now, you can contact the dealer(s) directly using the information provided below or contact CarsDirect's award-winning customer service team at 1.888.CarsDirect (1.888.227.7347) or [email protected]
For your reference, your customer transaction number is .
Tell us a little bit about yourself
Looking for dealers in your area...

*As configured. Excludes taxes, title, license and other customary fees, such as dealer documentation fees, tire and battery disposal fees and, where applicable, finance charges. By clicking on “Get Your Price Quote Now”, you agree to our Terms of Use (including the Supplemental Terms) and Privacy Policy. You further consent to being contacted at the number you provided by CarsDirect and certain participating automotive dealerships, which may include autodials, text messages, and/or pre-recorded calls; this consent is not a condition of purchase or service. Message and data rates may apply.
Have feedback about this experience?
Let us know.
Tags:
2020 Compare Cars Hatchbacks Sedans Small Toyota Corolla News Toyota News
2021
The Car Connection
See the winners »
2021
The Car Connection
See The Winner and Nominees »