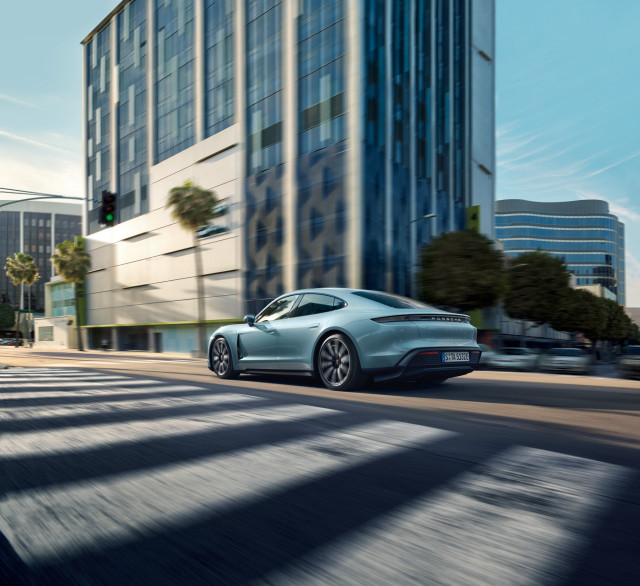 The Porsche Taycan is first blood from the German automaker's EV body politic. It's just a taste of the savage speed that electric powertrains can provide in this decade, and the Taycan chums the waters for Porsche's inevitable feast of electrified performance cars.

Our luxury car category skips the $50,000 prerequisite that applies to the rest of the categories, which is helpful when the Taycan costs more than $100,000 to start and maxes out well past $200,000. Our TCC Rating of 8.8 for the Porsche Taycan is at the top of every car we've rated this year—no others are close.

The Taycan is our Best Luxury Car To Buy 2020 because it maxes out on brutal speed and performance and its electric powertrain (more on that later) aces our fuel-economy scale. The build-up for Porsche's newest car will be slow; they'll be very limited until mid-2020, mostly top Turbo and Turbo S models that were eagerly snapped up by owners when the car was announced last year.

The Taycan combines all the elemental Porsche attributes: sleek shape, blistering quickness, no grille, shocking overall performance. (Pun intended on the last one.)

At its heart are two electric motors, one for the front axle and one for the rear axle, that make up to 720 horsepower for a few furious, but glorious seconds. Taycan Turbo and Turbo S models nominally make 616 hp (overboost lasts just a few seconds when launch control is used; Turbo jumps to 670 hp, Turbo S hits 720 hp) and the Taycan 4S makes 563 hp or 522 hp, depending on battery size.

The Taycan slingshots from 0-60 mph in as little as 2.6 seconds in Turbo S models, which is faster than falling off a building. No, really. From there, any Taycan starts to blur reality figuratively and literally—it's hard to keep an eye focused on the world ahead, especially when it's arriving so much sooner than our brains can process. In any Taycan, the accelerator pedal doubles down as a space-time controller; there's a mental readjustment of closing speeds that's necessary while driving.

Porsche's route for performance is somewhat unique in that the Taycan uses a 2-speed transmission at the rear for faster takeoffs and some semblance of longer range. The Taycan's range is shorter than other electric cars, only 200 to 250 miles depending on model and battery size, which may be questionable to electric car shoppers. Porsche's answer? So what?

The Taycan is an exercise from Porsche to show the world what a performance car can be if it uses an all-electric powertrain. The Taycan is not an electric car with performance potential. To that end, the Taycan is equipped with ultra-wide tires at the rear—up to 305 mm—and handling hardware that's heavy duty, and just plain heavy.

Interior comfort isn't compromised much either, provided you look at the Taycan and forget it has two rear doors. The front seats are comfortable and supportive, and up to four touchscreens make driving and riding in the Taycan feel like living in "Minority Report." A curved instrument display goes further, too.

The rear seats? They're passable for very small adults or children—not unlike a 911. Cargo capacity in the Taycan also takes a page from the 911, too; both are suitable for weekend trips, barely.

But the Taycan's fit and finish is excellent and its style inside and out is even better. It's no wonder its our best luxury car to buy, it's one of the few we'd consider cutting off a limb to drive again.

Check out more of our Best Car To Buy 2020 winners.