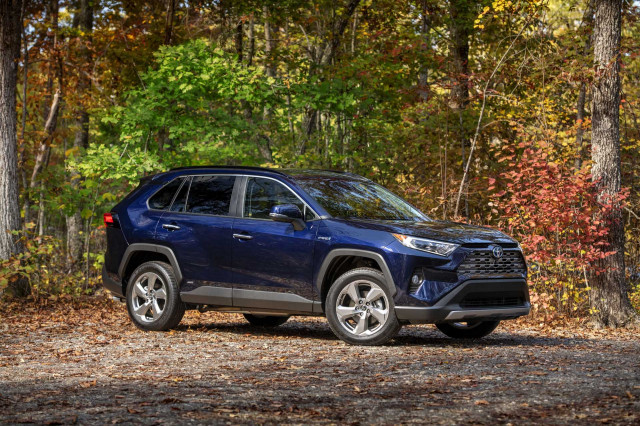 The Toyota RAV4 is the best-selling non-truck in America due to its practicality, reliability, AWD capability, and easy-to-use if not outdated technology. More than anything, it is familiar, like the Camry mid-size sedan a decade before it.

For the 2019 redesign (which we weren’t able to drive in time for last year’s testing), Toyota wanted the compact crossover to be much more than familiar. With its square fenders and black cladding, Toyota channeled its seemingly timeless Tacoma and 4Runner to make the RAV4 assertive. The low roof and angular rear necessitate some head ducking when getting in, and rear headroom is compromised in both models. But such is the price of fashion.

The other part of Toyota’s DNA was born into the RAV4 Hybrid, which, at 39 mpg combined, was the most fuel-efficient crossover without a plug behind the 40-mpg 2020 Ford Escape Hybrid in AWD. That’s a 7-mpg improvement over the outgoing RAV4 Hybrid.

The fuel economy alone in the best-selling vehicle in the best-selling segment is enough to warrant consideration for our Best Car To Buy. But the RAV4 Hybrid does it without compromise to interior space or outward capability. The 219-hp 2.5-liter inline-4 hybrid system uses an electric motor on either axle for all-wheel drive, making it quicker and more powerful than the standard 203-hp non-hybrid.

The 1.6-kwh battery pack fits under the rear seat, like in other Toyota vehicles, so passenger and cargo volume is the same as the gas model. Ground clearance is 8.6 inches, so there is an off-road thought, though most owners will use the RAV4 Hybrid more for sport. Like the gas model, the Hybrid comes well equipped with standard active safety features that helped it earn a Top Safety Pick+ award when equipped with certain headlights.

The most impressive thing about the RAV4 Hybrid is the XSE model ($35,670) costs only $800 more than the similarly equipped RAV4 Adventure gas model. That’s the volume model we would recommend. The base $29,220 Toyota RAV4 LE is $2,250 more than the gas model.

The 2020 Toyota RAV4 Hybrid gives car shoppers a well-equipped, safety-focused small crossover with exceptional fuel economy. That could be a winning formula for our Best Car To Buy 2020.

Check back with us on Jan. 2 when we announce the winner of this year's award. We'll also announce the winners from our sister sites, Motor Authority and Green Car Reports. The Car Connection will also reveal the best vehicles in 15 categories to help you choose the best the cars, trucks, and SUVs for your needs. Finally, be sure to vote for our annual Driver’s Choice awards and tell us what you think is the best in every category.