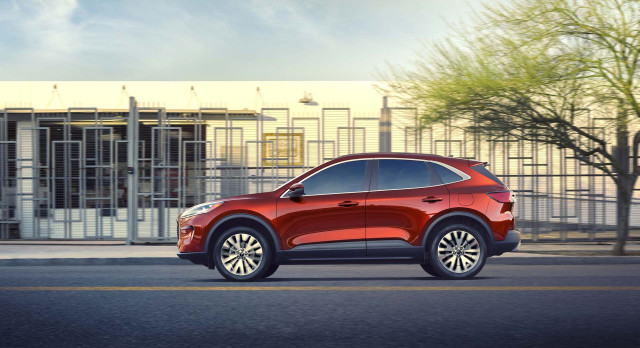 It’s been a long time coming, but the new 2020 Ford Escape has some good reasons for its overdue arrival: a new body and interior, new safety technology and infotainment systems, and new hybrid and plug-in models that soar to new fuel economy heights.

While the outgoing model had the heart of a hot hatchback, the 2020 Escape softens its stance. It wears a more organic, flowing shape that’s equal parts Mazda and Model 3, to our eyes. It’s friendly and inoffensively good-looking—and it leaves plenty of room in Ford’s crossover lineup for a boxy Bronco cousin due in the next year, based on the same running gear. The Escape’s interior can come off a bit somber in its stock basic-black upholstery and trim, but it’s neatly organized and has a big, bright available 8.0-inch touchscreen interface, front and center.

We wish the Escape’s roomy new cabin had better front seats; they’re narrow and have short cushions. Still, both the front and back-seat passengers get more knee and head room than in the last Escape, and the second row slides to flex its cargo-carrying muscle; it’s somewhat smaller than a Subaru Forester, our Best Car To Buy 2019, but the 2020 Escape’s capable of carrying five people and their stuff without complaint.

For performance, the 2020 Escape splits its personality three ways. We’ve sampled the base 181-horsepower 1.5-liter turbo-3 and found it fine for puttering around town. The engaging 250-hp turbo-4 engine’s the highway hustler, and feels the most like the outgoing model, with its energetic acceleration, firmer handling, and available all-wheel drive. But the new Escape’s traded some steering sharpness for better ride comfort.

Gas-mileage geeks like us love the new all-wheel-drive Escape Hybrid, which taps a lithium-ion battery and electric motors to push the crossover SUV’s EPA combined numbers into best-ever range (final ratings are coming soon). Early next year, Ford adds a plug and bigger batteries that will give the Escape about 30 miles of electric-only range.

Check back with us on Jan. 2 when we announce the winner of this year's award. We'll also announce the winners from our sister sites, Motor Authority and Green Car Reports. The Car Connection will also reveal the best vehicles in 15 categories to help you choose the best the cars, trucks, and SUVs for your needs. Finally, be sure to vote for our annual Driver’s Choice awards and tell us what you think is the best in every category.