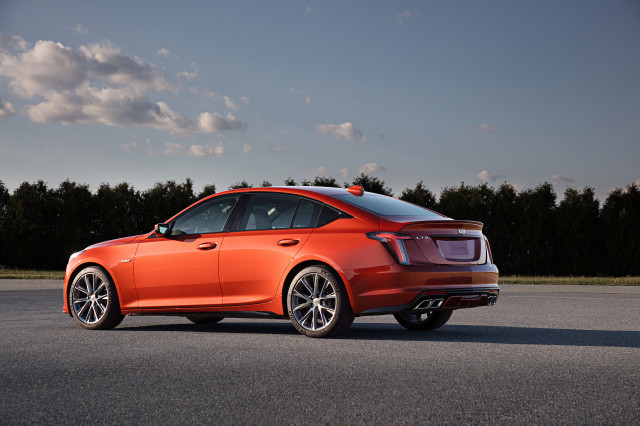 Cadillac has announced pricing for the higher-performance variants of its 2020 CT5 sedan. The CT5 Premium Luxury with the twin-turbocharged 3.0-liter engine will start at $45,190; the sportier CT5-V at $48,690, the company said Tuesday.

This caps off the pricing of Cadillac's replacement for its CTS sedan. The base model checks in at $37,890 to start; the Premium Luxury model with the smaller, 2.0-liter engine will start from $41,690. All of these prices include a $995 destination charge.

In addition to pricing, Cadillac also announced that its sportier CT5-V model has been rated at 360 horsepower and 405 pound-feet of torque—5 hp and 5 lb-ft more than originally estimated. The Premium luxury model with the same 3.0-liter, twin-turbocharged V-6 packs 335 horsepower and 400 pound-feet.

All CT5 models can be equipped with all-wheel drive, though rear-wheel drive is standard. Adding AWD requires the addition of a cold weather package, and the premium varies from around $2,000 to nearly $4,000 depending on the model in question.

Cadillac's sedan lineup is undergoing quite a shake-up for 2020. With the discontinuation of the CTS and the short-lived CT6, the CT5 will now have to carry the large-sedan torch. Higher-performance variants are coming, but their timeline remains unclear.

The CT5 will arrive alongside the new, compact 2020 Cadillac CT4. The smaller Caddy will start at $33,990 and the CT4-V at $45,490. Like the CT5, the CT4 will make use of turbocharged engines, though its largest will be a higher-displacement 4-cylinder, rather than a V-6.

Both will hit showrooms in the first quarter of 2020; the CT6 will be phased out over the course of the year as inventories are depleted.