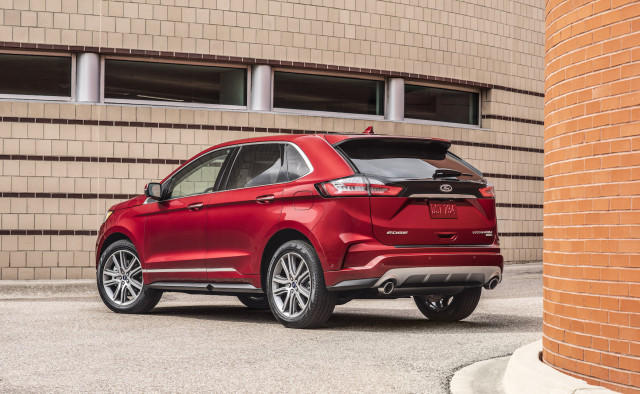 The 2019 Ford Edge crossover SUV earned a Top Safety Pick rating from the IIHS when equipped with certain headlights, marking the first time a Ford vehicle has received the coveted safety distinction for the 2019 model year.

“We are really pleased the insurance industry places such a high degree of trust in our 2019 Ford Edge,” Angela Cascaden, Ford Edge Marketing Manager, said in a statement.

The mid-size crossover earned "Good" ratings on all six crash tests. In past years, the Edge earned only an "Acceptable" rating on the tough driver-side small overlap crash test, which simulates a head-on crash with another vehicle or with a stationary object such as a tree or utility pole. Refreshed for 2019, the Edge and mechanically similar Lincoln Nautilus benefited from a modified bumper structure, according to the IIHS.

The 2019 Edge's headlights really illuminated the difference in the upgraded rating from the IIHS. Earlier in 2019, the Edge and Lincoln Nautilus missed out on the Top Safety Pick distinction due to subpar headlights. Models built after March come with available adaptive LED projector headlights, which earn an "Acceptable" rating and qualify for the TSP rating. Earlier versions of those headlights were rated at "Poor," which is the same assessment of the LED projector headlights on base Ford Edge models.

Standard on the 2019 Ford Edge is automatic emergency braking, which was able to avoid collisions in testing at speeds of up to 12 mph and 25 mph.

IIHS testing is more rigorous and reflective of real world situations than the tests conducted by the NHTSA, which gave the 2019 Ford Edge a five-star safety rating overall. Only the NHTSA rollover crash test came in at four stars for the 2019 Ford Edge.