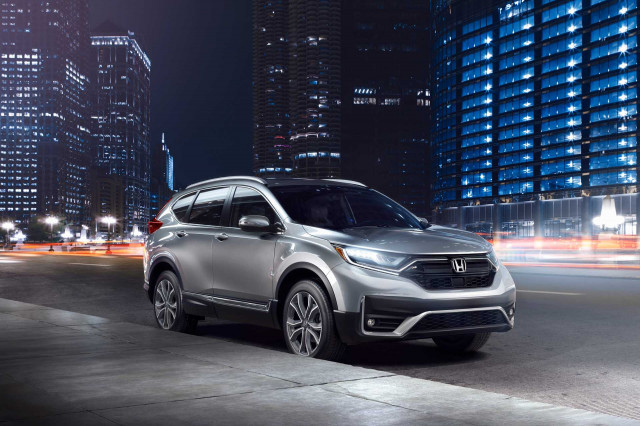 It's a big year for the updated 2020 Honda CR-V crossover. The mega-selling utility vehicle gets a new face and headlights, new hybrid model due later, and an engine overhaul across the model line.

For 2020, Honda dispatched its base 2.4-liter inline-4 that previously appeared in lower-cost models for a more powerful 1.5-liter turbo-4 that was optional in prior years. The 1.5-liter turbo-4 makes 190 horsepower (an increase of 6 hp over the 2.4-liter inline-4) and 179 pound-feet of torque (down from 180 lb-ft). All CR-Vs use a continuously variable automatic transmission (CVT) and most crossovers will return about 30 mpg combined, according to the EPA. All-wheel drive is optional on all trims and adds $1,500 to the bottom line.

In addition to engine upgrades, all CR-Vs for 2020 get standard active safety features, called HondaSensing, that include automatic emergency braking with pedestrian detection, active lane control, and adaptive cruise control. Blind-spot monitors, rear cross-traffic alerts, and automatic high beams are optional features on many crossovers. A side-view camera system that displays the passenger-side blind spots, which Honda calls LaneWatch, is standard on EX models and higher.

This year, the CR-V received mild visual updates including new wheels, new bumpers, and a new grille. Inside, base CR-V LX models still make do with a 5.0-inch display for audio while CR-V EX and higher trims get a 7.0-inch touchscreen with Android Auto and Apple CarPlay compatibility.