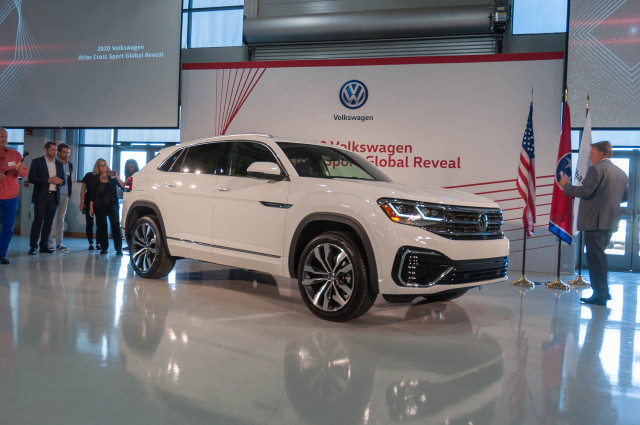 Volkswagen's doubling down on crossover SUVs with the 2020 Atlas Cross Sport. On Friday in Chattanooga, Tennessee, the German automaker unveiled the 2020 Volkswagen Atlas Cross Sport, a shorter two-row version of the three-row Atlas to take on the Honda Passport and Nissan Murano. In the Volkswagen crossover lineup, it slots between the smaller Tiguan compact crossover and larger Atlas.

The Atlas Cross Sport is 2.8 inches shorter, mostly chopped from the Atlas's rear overhang. Volkswagen said the Cross Sport sits 2.3 inches lower than the Atlas giving it a sportier appearance. Despite the shorter body, the Atlas Cross Sport shares the three-row's 117.3-inch wheelbase, which is 6 inches longer than the Passport. That extra wheelbase length could translate into a more stable ride than what the Passport can deliver, but we'll need to wait  until we get behind the wheel to see. 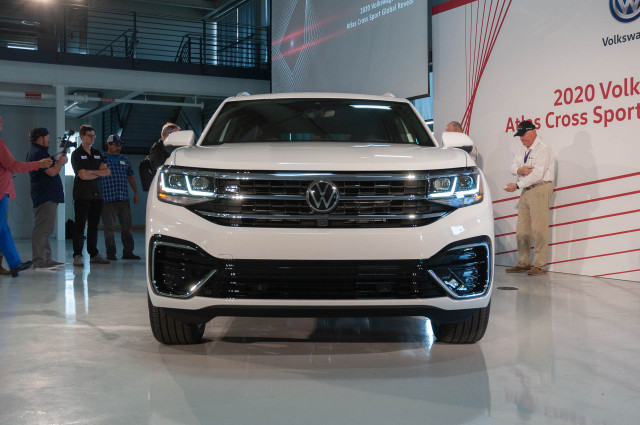 With a three-bar grill extending to the LED daytime running lights, a more sculpted front bumper, and brimming with chrome accents, the Atlas Cross Sport looks sportier than the three-row Atlas. The rear features new taillights, bumper, and looks like an Atlas that's been squished a bit with a steeper rake to the rear window. R-Line trim swaps out the chrome accents for piano black and adds a more sculpted front bumper. Available 21-inch wheels add a sportier look. 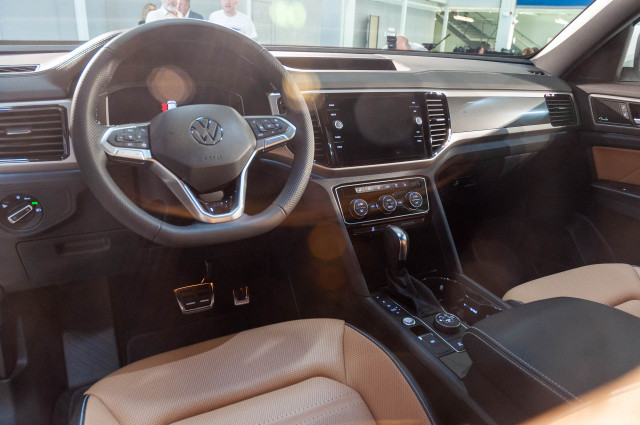 Inside, the Atlas Cross Sport has a simple dashboard with real hard buttons and controls, like its Atlas big brother. A new steering wheel features upgraded controls and some models feature stitched accents on the door panels. There's seating for five and the 40.4 inches of rear leg room should provide plenty of space to comfortably sit three adults in the second row. Up to 40.3 cubic feet of cargo can be stuffed behind the second row while the Atlas Cross Sport can swallow up to 77.8 cubic feet of life's adventure gear with the second row folded. That's more cargo volume than the Chevy Blazer and Nissan Murano, but not as much as the taller Honda Passport. 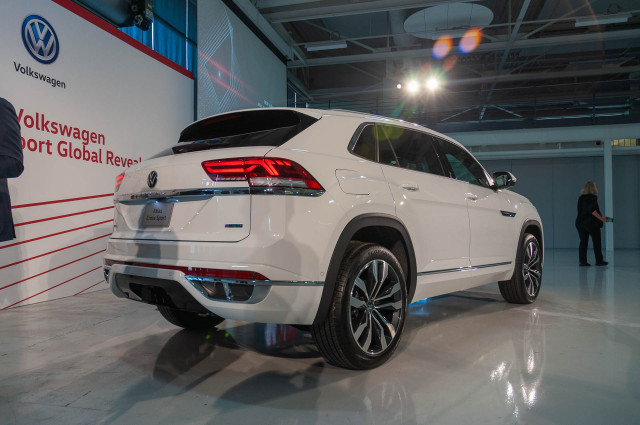 Like the full-size Atlas, the Atlas Cross Sport will be powered by either a 2.0-liter turbo-4 with 235 horsepower or a 3.6-liter V-6 with 276 horsepower sent to the front or all four wheels via an 8-speed automatic transmission. Volkswagen said the V-6 can tow up to 5,000 pounds when equipped with the tow package.

Every Atlas Cross Sport will come standard with important safety technology such as automatic emergency braking, blind-spot monitoring, and rear cross-traffic alert. There are eight trim levels, and the higher trims equipped with adaptive cruise control and parking sensors.

Options and upgrades on the Atlas will range from a 12-speaker Fender audio system and wireless phone charging to heated rear seats and ventilated front seats.

Pricing will be announced closer to when the 2020 Volkswagen Atlas Cross Sport goes on sale in the spring of 2020.

Volkswagen paid for travel and lodging so Internet Brands Automotive could bring you this firsthand report.