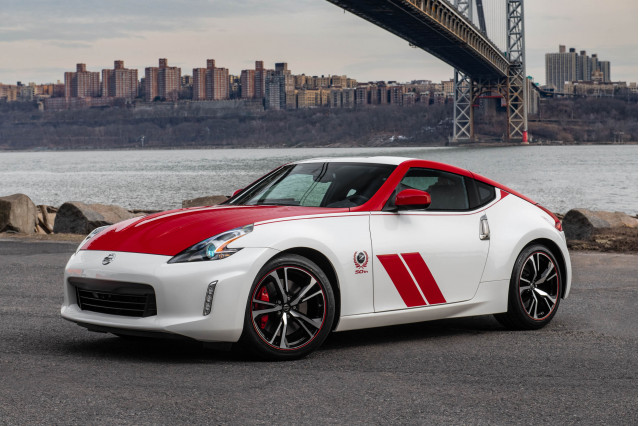 Fifty years is a long time. The 50th anniversary edition of the Nissan 370Z has me in an old-fashioned state of mind. Something about a storage pocket instead of a touchscreen, a 6-speed manual instead of some dual-clutch wizardry, and an instrument cluster that raises and lowers with the steering wheel makes me want to sigh in a big gasbag of nostalgia, “Ahh, they don’t make them like this anymore.”

And if I holler at the neighborhood kids to keep off my lawn then I have the cheap thrills of the Z-car to keep me young. Sweet Z-car, your fountain of youth even takes me back to a time when a manual sports coupe in rear-wheel drive was an affordable proposition.

Sometimes a time machine to the past is great. Jamming through the gears on an open road with the windows down and the radio up never gets old. Tucking in and out of turns and looping through cloverleaf ramps transforms the daily commute into track day fantasies. But, having seats that hug instead of squeeze, and technology that complements your life instead of dating it is a nice option, too.

The 2020 370Z occupies that rarest new car spot, like the Toyota Land Cruiser, of buying a new car that feels old.

Nissan has made a habit of letting aging but still-selling vehicles continue on, such as the Nissan Pathfinder three-row crossover, the Frontier mid-size pickup truck, the GT-R supercar, and the entry level 370Z sports coupe, which was last redesigned for 2009. Old can still be fun.

The 50th Anniversary Z honors the racing heritage of the 1970 Datsun 240Z. It’s offered in two two-tone paint jobs, silver with black, or in the tester’s case, white with a red hood and racing lines down the sides to the hatch. Twin racing stripes adorn the doors. Some kids called out, “cool car,” because the paint and profile are pure sports coupe. Those kids couldn’t have known by looks alone that this cool car doesn’t carry a painful price.

The 370Z is all elliptical curves inside and out, not unlike the Audi TT (which gets the axe after this year, unfortunately), but with a longer nose and a more sloping racing roofline. The round rear houses wide 19-inch wheels wrapped in low-profile Potenza S007 summer tires (275/35R19). The Z is all curves except for the Z zigzag lighting.

Inside, the elliptical curves take the form of scooped door handles, which share a housing with elliptical air vents in the door. It strikes an impressive pose, inside and out, even if it isn’t the fastest toy on the block.

The best of the 370Z is right where it should be, under the wheel and behind the hood. The naturally aspirated 3.7-liter V-6 with the 6-speed manual makes 332 horsepower for a top speed of 155 mph. It isn’t quick from a stop, but once it hits about 3,000 rpm, there’s a ton of grunt to keep pushing the gears into the 5,000-rpm range at 270 pound-feet of torque. It begs to be redlined, even if a red light flashes in the cluster to change gears.

The 6-speed has short throws and even notching. It’s easy, and the clutch pedal is balanced so the only time you have to stomp it through the floor is on start up. If it sounds like I was rough with the 370Z, it’s because it can take it, and the Z wants to be driven hard. It has downshift rev matching Nissan calls SynchroRev Match, which is great on the autocross but means there’s no reason to engine brake in everyday driving into stoplights.

The best part of the Z is the handling. It hugs corners and performs like a vehicle with a much higher price than $35,000.

At 5-foot-8, I have the height-challenged advantage of fitting comfortably in seats at ballparks, coach flights, and public transportation. But my gnomish proportions didn’t make the aggressively bolstered seats of the Z-car any more comfortable. The sides hold firm from the lats to the hips, without providing much relief away from the auto cross, where it feels most fitting. The Z isn’t going to exist on autocross alone.

The $2,600 50th Anniversary package includes 4-way synthetic leather seats with a power recline and power forward button wedged between the right thigh and center console. On the outside of the seat bottom are old-school roller controls to raise and lower the seat, or adjust the thigh cushion. After much twisting and finagling, like folding a fitted sheet, I eventually just accepted that it is as good as it’ll get.

The driver ergonomics are solid, though.

There are heated seats in Sport trim. There is a USB port. Bluetooth connectivity. A playing card-sized rearview camera in the rearview mirror. One of those CD player things. Up to 12 preset radio stations. An instrument cluster attached to the steering column so when you adjust the wheel it all moves. Like a race car or video game. There’s a vehicle info display that is something I would show my son as an explanation of what I grew up on and why I won’t ever grasp all the buttons on an Xbox controller. I feel like I should mention it has air conditioning.

Storage is limited. There’s no lever to move the seat forward and put something in the pocket between the seat and the hatch. Surprisingly, the sloping mouselike hatch of the two-seater fit my daughter’s hockey bag. She’s a goalie, the bag is huge, so it could probably fit two sets of golf clubs. It can’t fit a goalie stick without using the passenger side seat, however.

The old-school feel and the old-school value of the 370Z make it both an entry-level sports coupe and a retro Japanese burner for older enthusiasts who want new-car style with old-car simplicity. It’s not as practical as a similarly priced Volkswagen Golf GTI or Subaru WRX, but it handles so much better that those, and has more power than a Mazda MX-5 or Toyota 86. It’s old, but it’s still good.