“Runner-up” has defined the Subaru Legacy sedan longer than the automaker would like to admit.

Marooned to the back of shoppers’ minds behind crossovers, the Legacy’s been playing third, fourth, or fifth fiddle to the Toyota Camry and Honda Accord sedans longer than Garth Brooks has been selling millions of records.

When the Legacy isn’t an also-ran to those folks, it’s sacrificed itself in the name of Subaru’s bestseller, the Outback, which is far more fashionable where Subie sells best. Both share the same Lafayette, Indiana, assembly, but the Outback’s virtually sold before they land on dealers’ lots. The Legacy needs a much longer runway.

But the new Legacy has friends in higher places who are fans of lower prices. The new Legacy is just $200 more to start than the outgoing version, and just $315 more dear in our recommended 2020 Legacy Premium configuration despite offering a raft of new tech, including an 11.6-inch touchscreen for infotainment.

The 2020 Legacy gets a 6.4 on The Car Connection’s overall scale now, same as the 2020 Outback. Where the crossover-wagon-y Outback succeeds in playing the middle between tough enough for outdoor duty and practical enough for daily detail, the Legacy scores in affordability and affability. 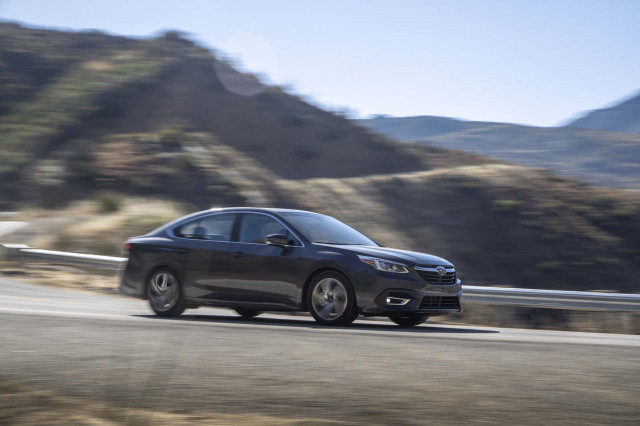 Its stiffer chassis this year let engineers soften up the suspension to silky, Haagen-Dazs-smooth levels. The base powertrain is a workaday 2.5-liter flat-4 that makes 182 horsepower but returned mileage in our 98.2-mile test at a 33.7-mpg combined clip. If EPA estimates at 35 mpg highway are anywhere close to real-world accurate—and we think they will be—the base powertrain’s 18.5-gallon fuel tank should net more than 640 miles of bladder-busting, playlist-blitzing range. Try "Dick’s Picks" perhaps—all of them.

A 2.4-liter turbo-4 borrowed from the Ascent crossover is the optional engine in the Legacy instead of last year’s 3.6-liter flat-6. Keeping the turbos off the boil is the only way to extract the best mileage from the 260-hp mill in Legacy XT models; the EPA estimates of 24/32/27 mpg aren’t far off, but our zesty run over about 100 miles netted us just 23.7 mpg combined, according to the trip computer.

The Legacy XT stops short of covetous sport sedan lore like the Legacy Spec B: the suspension’s just a hair too soft and the interior noise too muted for snorty runs. But the bones for a killer Legacy GT in the future? All there. 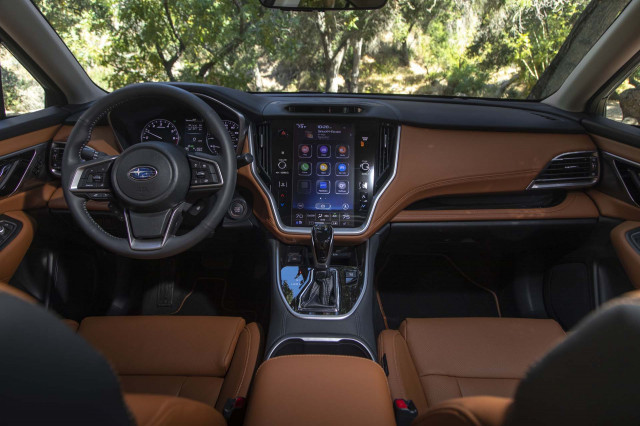 There’s flexibility along the range for the Legacy. In bare-bones base versions that cost less than $26,000, the Legacy still offers dual touchscreens for infotainment, standard all-wheel drive, and active safety features that include automatic emergency braking, adaptive cruise control, and active lane control. In top-shelf models like the Touring XT that costs nearly $37,000, Subaru includes soft nappa hides, 18-inch wheels, the big touchscreen, driver-recognition systems, heated and cooled front seats, and four USB ports. Subaru’s run through the luxury options list is meant to tempt buyers who may not have the stomach for a German sedan’s price tag—or who’ve realized the best and brightest at BMW, Benz and Audi already have been shifted to the crossover team.

Now, with the Legacy, Subaru aims for thrifty sedan shoppers who may be unloved by automakers discontinuing those cars, or disaffected crossover buyers who like all-wheel drive but don’t like getting bilked at the final price for a tall-riding vehicle.

The Legacy’s still playing third and fourth fiddle to Subaru’s Crosstrek, Forester, and Outback, but it’s no runner-up in value. At nearly the same price as the smaller Crosstek, less than a Forester, and less than rivals from Honda and Toyota that don’t offer standard all-wheel drive, the 2020 Legacy is first chair at what sounds like great value for shoppers.

Subaru provided travel and lodging to Internet Brands Automotive to bring you this firsthand report.