What's a Monroney window sticker for, and what does it do? 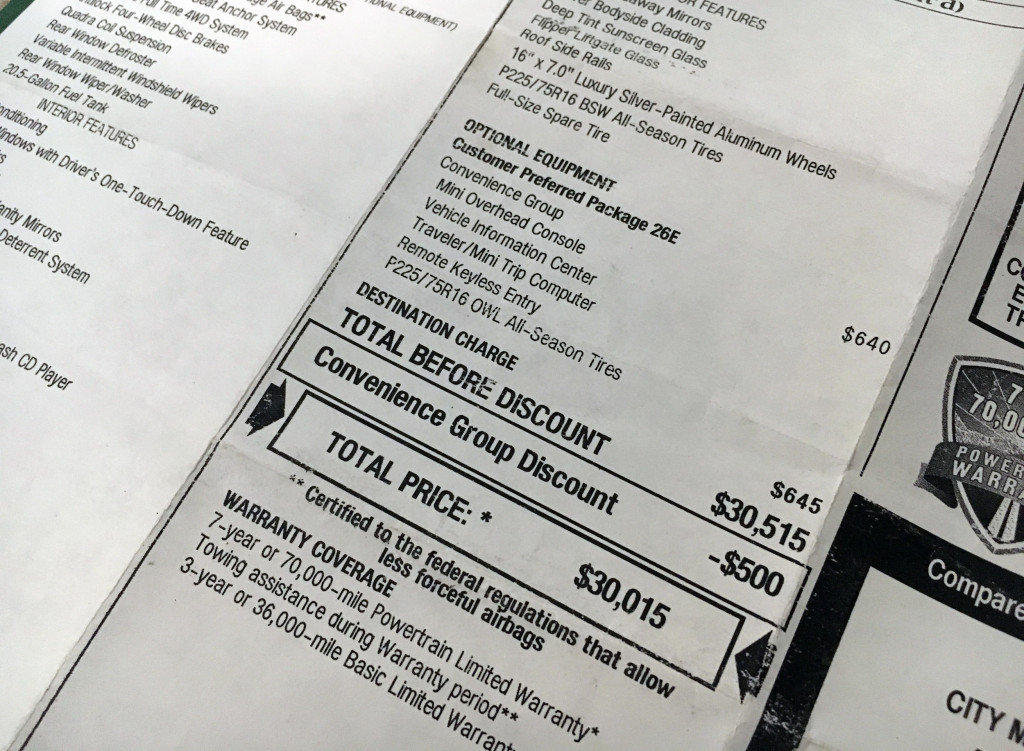 What is the one thing you’ll find on every showroom floor aside from four wheels and the fear of a bum deal? The window sticker.

Also known as the Monroney label, the window sticker is a universal data sheet mandated on all new passenger vehicles 10,000 pounds or less sold in the U.S. It’s meant to keep shoppers from getting swindled. It lists essential vehicle information such as vehicle equipment, safety rating, fuel economy, parts origin and suggested retail price free from marketing spin.

“The information is verified by the federal government (EPA and NHTSA) so we know it’s one standard across all automakers,” said Alex Epstein, director of Transportation Safety at the National Safety Council. “It is an excellent communication device for new or used cars at the point of sale.”

The Monroney is the single most important tool in helping the consumer make an informed decision on the worth of a new vehicle. Without it, manufacturers incur a $1,000 fine. If a person alters it before reaching the dealership, the fine can include a year in prison.

But what is a Monroney? How did it get the name? What needs to change to make it more useful? 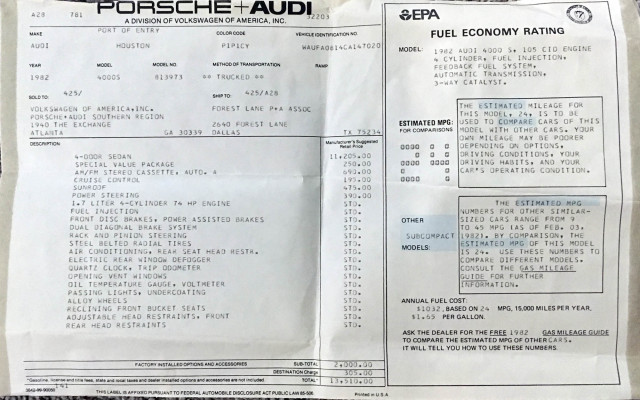 The man, the myth, the label

The Monroney was borne out of the demand for more purchase information by car shoppers. Senator Almer Stillwell “Mike” Monroney, Democrat of Oklahoma, sponsored the Automobile Information Disclosure Act in 1958, just in time for the 1959 model year. Under the law, the sticker had to show make, model, VIN, final assembly point, name and location of dealer to be delivered, manufacturer’s suggested retail price of base vehicle, optional equipment, transport charges and total MSRP.

The impetus for Monroney’s bill was not legislative vengeance for family members getting cheated by a car dealer, despite rumors to the contrary. The law came about as most laws do, because adults couldn’t settle their squabbles like adults.

The committee was formed “in response to dealer complaints of abusive treatment by automakers, particularly in the awarding of franchises,” according to The New York Times in 2009.

Dealers weren’t the only victims.

“The dealer who is honest about the so-called ‘list price’ cannot compete with the one who ‘packs’ several hundred dollars extra into it so he can pretend to give you more on your trade-in,” Monroney said when introducing the bill in 1958.

A one-time reporter, Monroney’s activist slant didn’t stop with cars. He also championed air safety by helping create the Federal Aviation Authority, and was an early proponent of the Civil Rights Act. 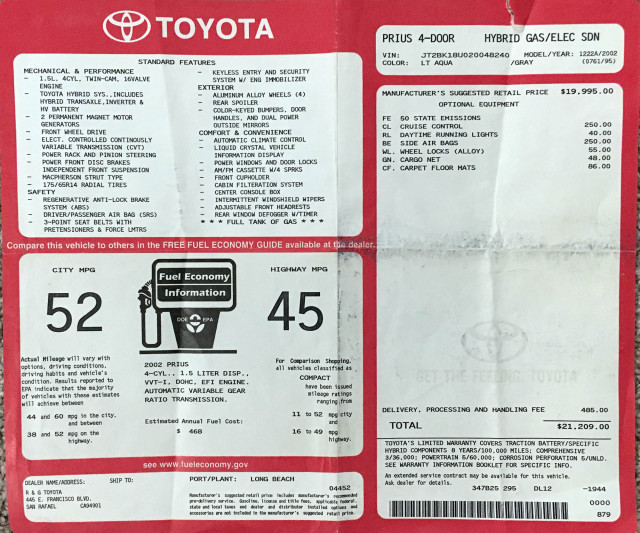 The fuel economy portion of the label may be the most useful part of the current Monroney. That addition started in the mid-70s, according to the EPA. Due in part to the OPEC oil embargo from 1973 to 1974, the Energy Policy and Conservation Act required fuel economy labels to be displayed on the window sticker of all new light duty cars and trucks. 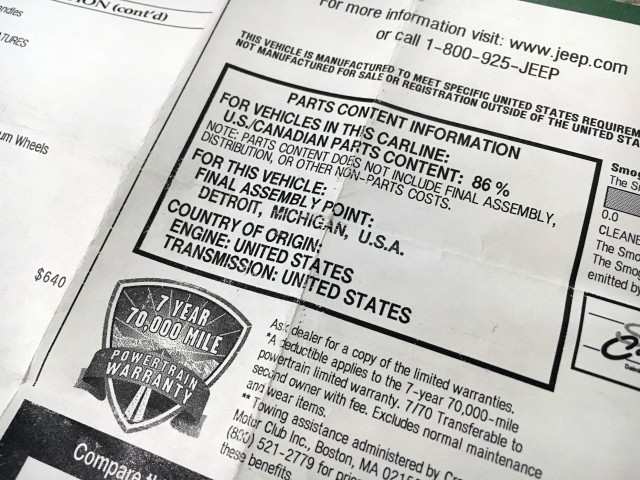 The 1994 American Automobile Labeling Act added more data to the Monroney. Under the provision, automakers disclose where the car was assembled, the percentage of equipment originating in U.S. and Canada, and the country of origin of the engine and transmission. Even though this has become complicated data to source, it at least provides a standardized comparative snapshot across vehicles.

The next evolutionary leap for the Monroney started in 2007 for model year 2012. Even though the New Car Assessment Program had been around since 1979 to gauge crash safety in new cars, it wasn’t until this time that the NHTSA began posting its “stars for cars” five-star crashworthiness rating system.

“That 5-star rating has been very successful in the sense that a consumer knows just by looking at the label if the car they were thinking of buying fits into the safest category,” Epstein said. “You could shop on safety alone.”

However, the NHTSA doesn’t crash-test all vehicles, and its regimen is not mandatory for a car to go on sale in the U.S. That’s a fundamental flaw in the agency’s mission, set out also in the early 1970s, but that’s another story. 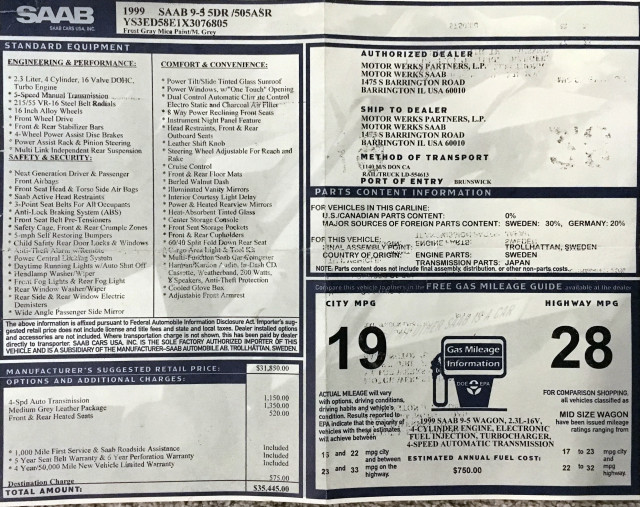 The broadest overhaul in the history of the window sticker came in 2013. Due to the 2007 Energy Independence and Security Act, and the advent of alternative-fuel vehicles such as electric vehicles and plug-in hybrid electric vehicles, a host of deeper dive efficiency data was added to the Monroney. It includes fuel economy range, fuel or energy usage per 100 miles, greenhouse gas emissions, smog rating, fuel/energy cost estimate over 5 years compared to the average new vehicle, annual fuel/energy cost based on 15,000 miles, and a smartphone scannable QR code to compare fuel and emissions ratings of other vehicles on fueleconomy.gov.

Fuel economy matters to car shoppers, despite the American appetite for large things.

“When consumers see the full label, they have a higher willingness to pay more for a vehicle with better fuel economy,” Shannon Baker-Branstetter, manager of Cars and Energy Policy for Consumer Reports, said in reference to a 2018 study on the efficacy of fuel economy labels.

In that study, Consumer Reports found that consumers would spend more than $1,000 extra on a new vehicle to save $100 per year in fuel costs.

The presentation of the EPA labeling has a direct effect on buyer behavior. Consumers who saw the full label on Monroney labels “were willing to pay significantly more for fuel economy compared to those who saw fuel economy information presented differently.” 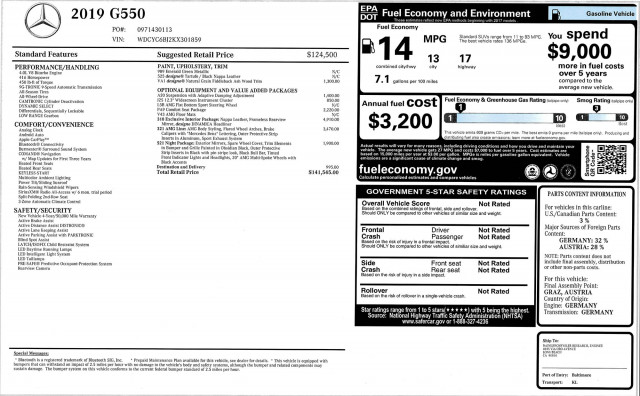 A Monroney for a new age

The evolution of the Monroney has been gradual, but some safety experts and analysts think it needs to keep changing as the U.S. fleet of vehicles electrifies, and contrarily, tilts toward trucks.

Those same analysts still see plenty of room for improvement to keep up with the proliferation of advanced driver assistance systems (ADAS). Automatic emergency braking, for one example, has been called more than 40 different things between automakers, Epstein said.

“The motoring public is confronted with a dizzying array of capabilities and variations between systems that make it very, very difficult for a novice to understand these systems let alone what their capabilities are,” Epstein said. “There is no plain English description of what these systems are or what they do.”

That’s why the NSC and University of Iowa’s Transportation and Vehicle Safety Research Program developed the website My Car Does What, and are pushing regulators to streamline the nomenclature.

The star safety system is also overdue for an upgrade based on new car technology.

“The Monroney label should include star ratings for how well a car protects occupants in a crash, how well it helps avoid a crash, and an overall score incorporating both,” said William Wallace, senior policy analyst at Consumer Reports. “Every day the NHTSA doesn't move toward this change is another day the agency disempowers consumers and lets one of its most powerful safety tools languish.”

The challenge is how to display all of this additional information in a way that is uniform and clear. Three technologies used in crash avoidance ratings—electronic stability control, forward-collision warnings and lane-departure warnings—are not included on the label, in part, because “the information on the safety rating label as a whole might not be legible,” the NHTSA wrote in 2010. That’s why the agency is still seeking comments from the public on how best to communicate the info.