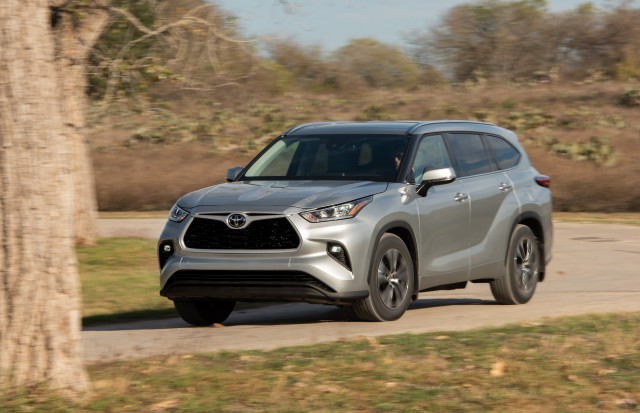 With the debut of its redesigned 2020 Highlander, Toyota hasn’t built the Prius of three-row crossover SUVs. The automaker’s 36-mpg combined fuel-economy estimate for the base front-drive 2020 Highlander Hybrid comes close, however. That figure is a hefty 8 mpg higher than last year’s hybrid combined EPA test estimate, thanks in part to the new front-wheel-drive version.

As I drove the new Highlander last week in San Antonio, the hybrid version made even more common sense than the well-equipped V-6 Highlander. Where the outgoing Toyota Highlander Hybrid was a curiosity in the lineup, the new model is solidly mainstream.

The 2020 Highlander is at dealers now, initially with a 295-horsepower, 3.5-liter V-6 shuttling power to its wheels via an 8-speed automatic transmission in L, LE, XLE, Limited, and Platinum trim levels. It's smooth and strong, with acceleration that feels quicker than its 4,100-plus pounds might seem capable of. The powertrain isn't the real story—the new platform is. Under the new Highlander, a stiffer structure helps it steer and ride better than ever before, even better than rivals like the Honda Pilot.

The Highlander Hybrid that will follow in early 2020 skips the base L trim and swaps in a 2.5-liter inline-4 paired to an electric motor fed by a nickel-metal hydride battery stuffed below the middle seat. The hybrid is rated at a total system output of 243 hp. The Highlander Hybrid is down about 75 hp compared to the new Ford Explorer Hybrid, but Ford estimates just 24 mpg combined for its new three-row crossover SUV. It's substantially heavier than the gas-only vehicle at about 4,500 pounds, but it's just as adept at clipping through narrow riverfront roads and along at 70 mph or more on divided highways.

No matter what wheels are driven, the Highlander Hybrid’s gasoline-electric powertrain communicates with its navigation system to anticipate traffic and topography ahead to prepare the system to use more or less electric power to reduce fuel consumption.

The Highlander switches to a new platform shared with the Toyota Camry and RAV4, and its styling is a combination of the two. The crossover SUV’s profile is more muscular and edgier like the RAV4 but with rounded design cues pulled from the Camry. It's a bit steroidal around its sills, pitched high at the rear like it's about to snap to the quarterback. Inside, its dash clusters most switches around a standard 8.0-inch touchscreen for infotainment that includes Apple CarPlay and Android Auto compatibility; Highlander Platinums swap in a flashier 12.3-inch touchscreen. On all Highlanders the interesting horizontal lines tuck in small-item storage to go with a deep center console big enough for small laptops and tablets to hide out of sight.

The 2020 Highlander's an expert at moving people and their stuff. Base L and LE Highlanders come standard with three-seat benches in the middle and third rows. XLE, Limited, and Platinum trims replace the middle bench with two individual captain’s chairs. Power front seats are the norm on most models, but we wish Toyota would add bottom-cushion tilt on the passenger side. The new Highlander stretches about 2 inches longer overall, and cargo volume rises to 16.0 cubic feet behind the third row, 48.4 cubes with row three folded, and 84.3 cubic feet with the second and third rows stowed. It's spacious enough to bring home bedroom furniture, should the need arise.

Toyota outfits every Highlander with automatic emergency braking, blind-spot monitors and adaptive cruise control. We expect crash-test scores will come in strong. Other standard features include a power tailgate and 18-inch wheels; pricey Platinum and Limited models, hybrid or no, get leather upholstery, JBL audio, and a hands-free tailgate.

Our pick of the lineup would be a relatively thrifty Highlander LE Hybrid, at just under $40,000, but it's possible to sticker one above $50,000 now, with hybrid power and all-wheel drive in Limited trim.

We've given the 2020 Highlander a TCC Rating of 6.6 out of 10 for now; neither the NHTSA nor the IIHS has crash-tested one, so there's upward potential in its score. Until those scores are released, you can read how the 2020 Highlander compares to our current three-row favorite, the 2020 Kia Telluride.

Toyota provided airfare and hotel for our first drive of the 2020 Highlander SUV.