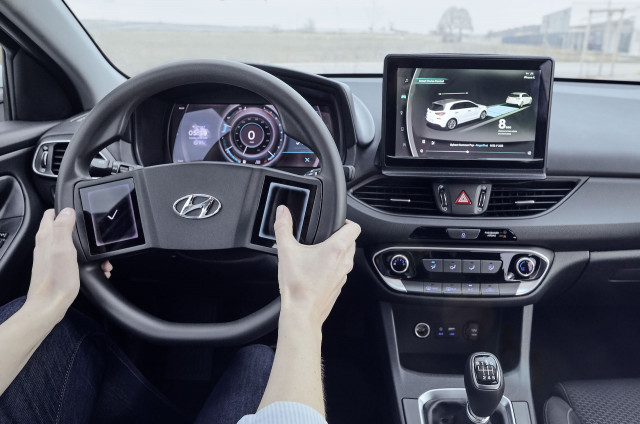 Like a design straight out of MTV's '90s TV show "Pimp My Ride," the early prototype for Hyundai's cockpit of the future unveiled Tuesday is full of touchscreens—even on the steering wheel.

The two-spoke steering wheel doesn't include a single button and instead places two touchscreen panels where driver controls typically sit in modern vehicles. Hyundai said the screens are customizable to display a driver's favorite functions, or they can automatically switch functions with whatever the driver might need to see at the moment.

Hyundai underscored that the photos depict an early mockup of what final technology could make it to the car of the future, however.

In some photos, the screens feature a simple pad with an "OK" button to select something presumably displayed on either the digital instrument cluster or the infotainment screen that pops out of the dashboard. Other show the screens divided into four sections for various functions. Hyundai included haptic feedback to mimic the feel of pressing a button and minimizing confusion.

Many modern cars have reverted back to physical knobs and buttons for important functions after haptic feedback trials a few years ago proved unpopular with consumers. Perhaps Hyundai's next-generation cockpit will change that. 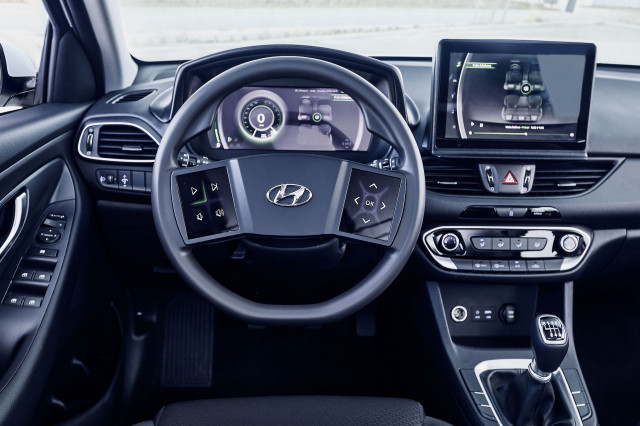 The other major changes come in the gauge cluster and center screen. The gauge cluster is a multi-layer display that can give off a 3D effect for drivers. By stacking the two displays behind each other ever so slightly, certain graphics are shown on the front and rear displays. This creates the impression of a 3D graphic that Hyundai said is clearer and easier to read than a single screen. As for the center touchscreen, it's large, but Hyundai didn't detail any changes to the technology. Inevitably, screens will grow larger as more info is fed to the car, and subsequently, the driver.

The brand said it chose a standard i30 hatchback (Elantra GT hatchback in the U.S.) to underscore these next-generation cockpits won't be exclusive to its most expensive cars. We have some time before these technologies trickle down to standard cars, but Hyundai said it remains hard at work to perfect the systems.