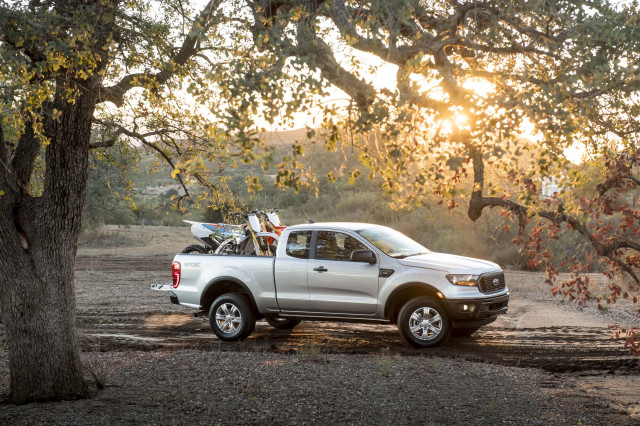 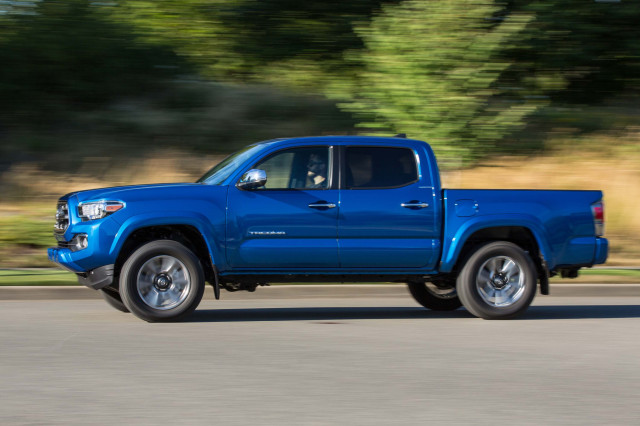 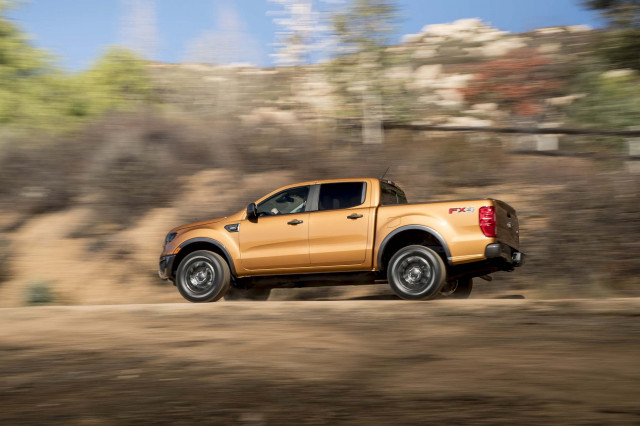 Maybe we ask too many questions.

Mid-size trucks like the 2019 Ford Ranger and 2019 Toyota Tacoma are more popular now than escape rooms—your friends will appreciate the truck more, too.

We rate the Ranger at 5.8 and the Tacoma at 4.8. That’s a sizable win for the Ranger, which nearly outpoints the Toyota in every category that we rate. The Tacoma takes home a win in one respect, which we’ll get to later. 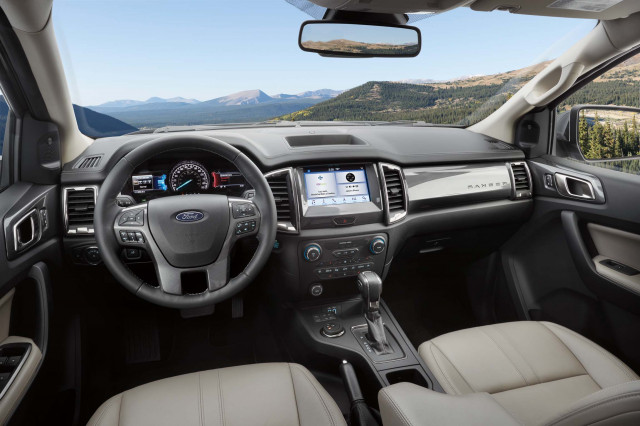 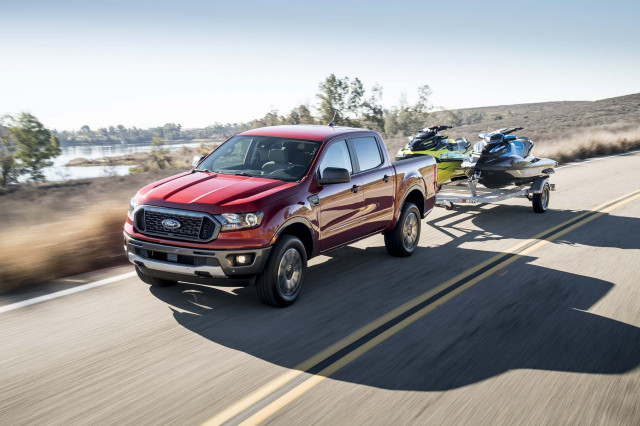 The Ranger has a more palatable style, according to our tastes.

Several years removed from an overhaul, the Tacoma carries on a butch look that may turn off some. It’s more macho—and perhaps more plasticky—with flared fenders and an upright grille.

The Ranger is more subdued by comparison. It’s not as brash, but we think it’ll age a little better. A deep stamp toward the bottom of the doors helps relieve some visual weight that other mid-sizers carry; pickups have a habit of looking slab-sided.

Inside, the Tacoma is presentable with Toyota’s typical attention to detail. It’s functional and highly organized, more intuitive than many other cars on the road.

The Ford is similarly agreeable, even if it’s blander. Lighter shades open up the cabin somewhat, but future editions of the Ranger could stand to have more fun like Cyndi Lauper.

Under the hoods of most Tacomas will be a familiar 3.5-liter V-6 that makes 278 horsepower mated to a 6-speed manual or 6-speed automatic transmission. Like the Ranger, the Tacoma makes rear-wheel drive standard on most trim levels, but four-wheel drive is a likely option for most Toyota pickups. The Tacoma’s V-6 may be relatively new for the small pickup, but it’s a sturdy Toyota engine that’s been adapted from other cars (namely, Camry) and it delivers the good in reliable and predictable ways like a flattop haircut. (It even sounds the same.)

Properly equipped, the Tacoma is rated to tow up to 6,800 pounds and shoulder about 1,620 pounds of payload in the bed.

A smaller, inline-4 is available in the Tacoma but not many buyers opt for it. We don’t suggest you do either.

By comparison, a 4-cylinder is the only engine available in the Ranger—but it’s turbocharged. The 2.3-liter turbo-4 is rated for 270 hp—down on the Tacoma’s horsepower—but at 310 pound-feet, which is 45 lb-ft more than the Toyota. It’s mated only to a 10-speed automatic that’s fairly transparent in its busyness, and most Rangers will have a part-time four-wheel-drive system that locks the front and rear axles together. A button in front of the shifter can lock the rear differential for maximum boulder attack. Neither truck offers an automatic four-wheel-drive system that’s more convenient. 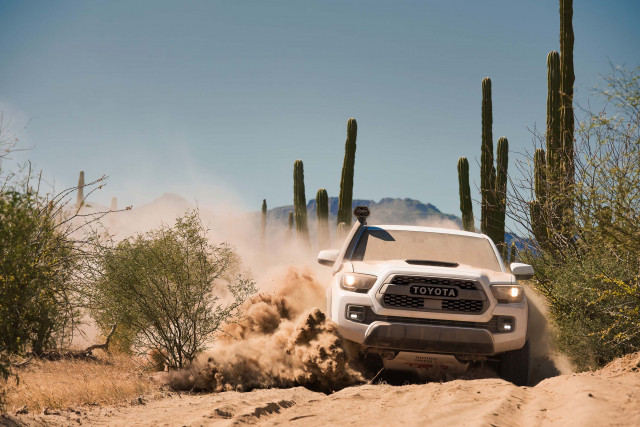 Both Toyota and Ford have available off-road modes that act like cruise control on tricky terrain, but the Ranger’s mode is more seamless in its operation. The Tacoma’s brake actuators flutter and grind on slow-speed maneuvers—perfectly normal but a little jarring. The Ranger deftly tackles off-roading with ease—with one caveat.

The current Tacoma had a three-year head start on the new Ranger, and Toyota offers TRD Pro versions of the pickup with far better approach and departure angles than the Ford. We expect Ford to supplement its only off-road Ranger (FX4) with other models in the future, but if rock bashing is in your near future—and it needs to be now—the Tacoma’s a winner there.

For the rest, the Ranger’s powertrain convinced us: It tows up to 7,500 pounds when properly configured, carries up to 1,860 in the bed and returns better fuel economy, according to the EPA. 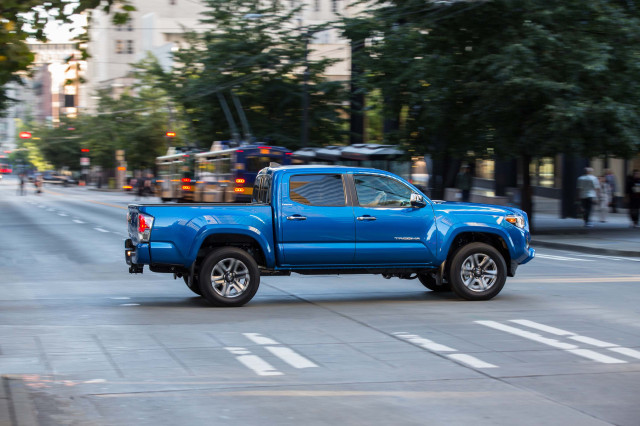 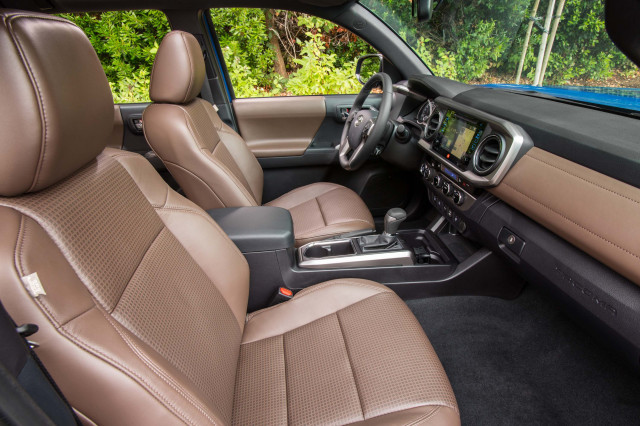 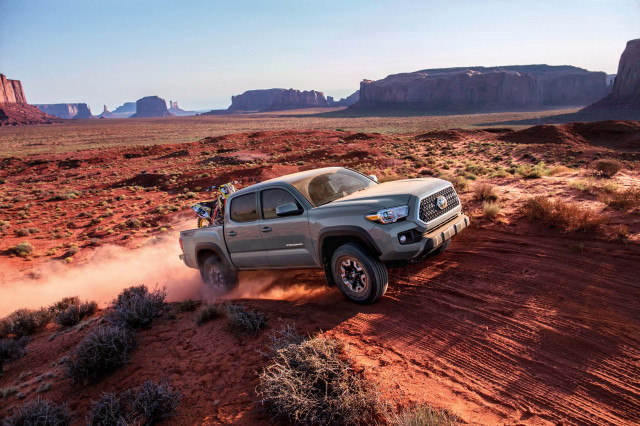 Neither truck is an especially good people carrier, although the Ranger’s adjustable seats help. This year’s Tacoma lacks height adjustability and a telescoping steering wheel, which can make finding a natural driving position difficult for long legs and short arms.

The Ranger not only offers a telescoping wheel but also its seats are height-adjustable, and on top trims, power adjusting with lumbar support.

The Ford’s front seats are more comfortable, but neither pickup is especially adept at hauling a crowd—even though Tacoma and Ranger are sold as four-doors most often.

Rear seat riders in the Toyota get about 32 inches of leg room in the back, on par with a small sedan, and the Ranger offers a scant two extra inches more.

When configured with four doors, the Ranger gets a 5-foot bed and the Tacoma can be fitted with a 5- or 6-foot bed. Extended-cab versions of both get 6-foot beds.

The Tacoma is longer of the two, if garage space is a concern. Every version of the Ranger measures about 211 inches, while the Tacoma is either 212 or 223-inches long, depending on cab and bed configuration.

Federal testers haven’t yet rated the Ranger for crashworthiness, but they gave the Tacoma a low four-star overall score. Both trucks feature automatic emergency braking on every trim level, and the Tacoma is equipped with adaptive cruise control and lane departure warnings. Ford offers adaptive cruise control, active lane control, and blind-spot monitors as a spend-up extra on all trim levels. Blind-spot monitors are available on the Tacoma’s pricier trims.

Both trucks are sparsely equipped to hit their low entry prices of about $25,000. Unless it’s a work truck, we don’t imagine many buyers will opt for base models. 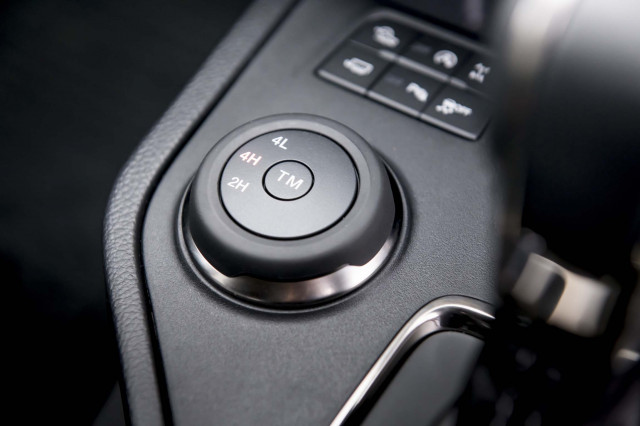 We see more value in the mid-range with four-wheel drive: Ranger XLT and Tacoma SR5, which both cost about $35,000.

The Tacoma SR5 offers a 6.1-inch touchscreen, power windows and locks, and upgraded cloth upholstery. The Ranger XLT offers upgraded cloth and power features too, but asks for more money to get a reasonable touchscreen with smartphone compatibility.

From there, both models can be fitted with more off-road-ready hardware—a Toyota TRD Off-Road version is about $36,500 and offers a 7.0-inch touchscreen and a locking rear differential; a $1,295 FX4 package for the Ranger adds more off-road hardware and $995 upgrades the infotainment.

Toyota heaps on the additional hardware all the way up to a Tacoma TRD Pro, which can tackle just about anything short of end-times, but those models cost nearly $50,000, fully equipped.

The Ranger doesn’t get that silly—yet.

For our money, the Ranger may be the more civilized truck between the two. But if a nimble, hardcore off-roader is needed, now, the Tacoma takes the day—and the mountain.

Rear Wheel Drive Read Full Specs
Rear Wheel Drive Read Full Specs
Compare Free Dealer Price Quote
With competitive price quotes from multiple dealers, you will be prepared when you meet your local car dealer. Please tell us how to contact you so that dealers can compete for your business!
2019 Ford Ranger
There are no Ford dealers in our network that are located near the ZIP code.
2019 Toyota Tacoma
There are no Toyota dealers in our network that are located near the ZIP code.
Thank you!
We have sent your request for price quotes on the 2019 Ford Ranger and 2019 Toyota Tacoma to the dealers you requested. They should be in touch shortly.
The Car Connection's dealer quote process is powered by our partner site CarsDirect.
Your request for a fast, free price quote on a 2019 Ford Ranger and 2019 Toyota Tacoma is in process. The CarsDirect Dealer(s) listed below will contact you shortly to discuss your request and to provide a quote. If you have questions now, you can contact the dealer(s) directly using the information provided below or contact CarsDirect's award-winning customer service team at 1.888.CarsDirect (1.888.227.7347) or [email protected]
For your reference, your customer transaction number is .
Tell us a little bit about yourself
Looking for dealers in your area...

*As configured. Excludes taxes, title, license and other customary fees, such as dealer documentation fees, tire and battery disposal fees and, where applicable, finance charges. By clicking on “Get Your Price Quote Now”, you agree to our Terms of Use (including the Supplemental Terms) and Privacy Policy. You further consent to being contacted at the number you provided by CarsDirect and certain participating automotive dealerships, which may include autodials, text messages, and/or pre-recorded calls; this consent is not a condition of purchase or service. Message and data rates may apply.
Have feedback about this experience?
Let us know.
Tags:
2019 Compare Cars Ford News Ford Ranger News Pickup Trucks Toyota Tacoma News
2020
The Car Connection
See the winners »
2020
The Car Connection
See The Winner and Nominees »