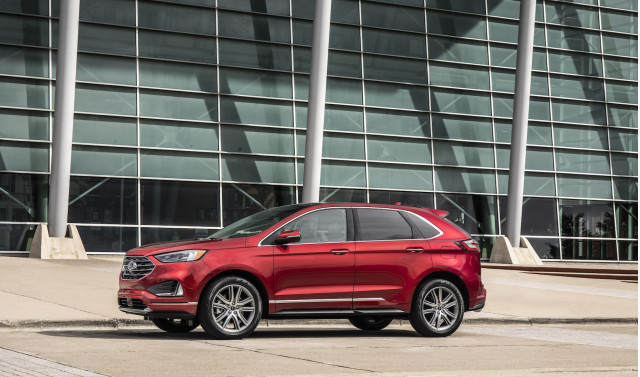 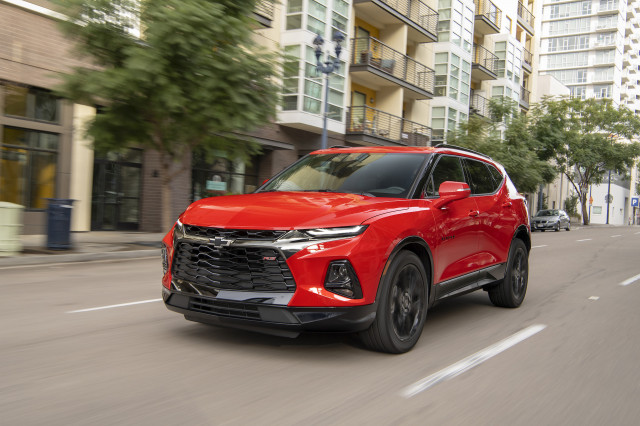 With crossover SUVs like the 2019 Chevrolet Blazer and 2019 Ford Edge, their makers cater to shoppers who want a high seating position and a flexible, spacious interior, but not three rows of seats.

In updating its 2019 Edge, Ford takes on the revived Chevy Blazer. Unlike past Blazer SUVs that were off-road-ready, the latest model is a pavement pounder with a car-like suspension and a choice of front- or all-wheel drive.

The Blazer’s racy, Camaro-inspired look is backed by a 308-horsepower V-6 teamed to a 9-speed automatic transmission in most configurations, although a 193-hp inline-4 comes standard on base L and 1LT trims. 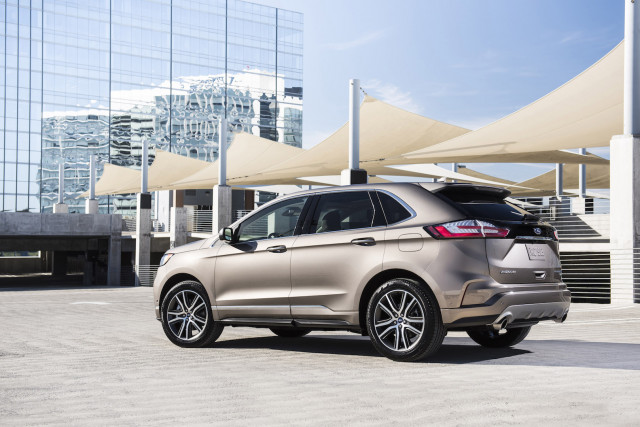 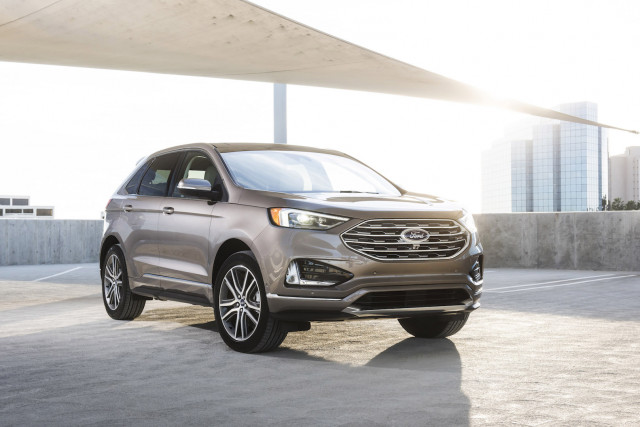 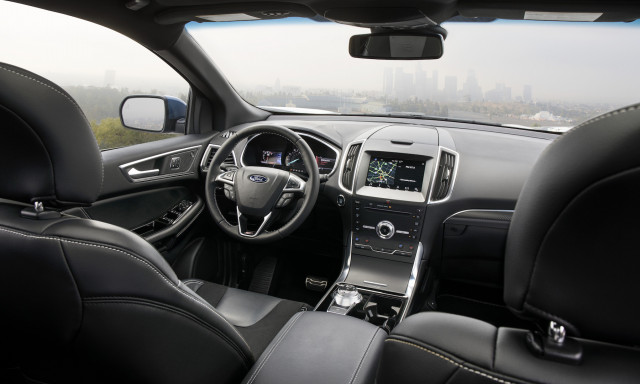 Most Ford Edges leave the automaker’s assembly plant with a 250-hp 2.0-liter turbo-4 paired to an 8-speed automatic transmission, although the Edge ST features a turbocharged V-6 rated at 335 hp.

The Blazer weighs a little less than the Edge and has more power, so it’s no surprise that the Chevy performs better on the road. The Edge can run out of steam during high-speed passing. Both crossover SUVs handle well, with nicely weighted steering and comfortable ride quality. Larger wheels on higher-trim versions of both ride stiffer, but not uncomfortably so.

Fuel economy tips in the Edge’s favor. With all-wheel drive, the turbo-4 Edge is rated at 23 mpg combined and the V-6-powered Blazer comes in at 21 mpg. Both crossover SUVs run on regular unleaded fuel.

The Blazer stretches 2.6 inches longer than the Edge and it’s less than half an inch wider. That bigger footprint doesn’t translate into a more spacious interior, however. The Edge has marginally more leg room for front- and rear-seat passengers and its cargo area is much more spacious. With the second row folded down, the Edge can swallow a maximum of 73.4 cubic feet of cargo while the Blazer can handle just 64.2 cubes.

We rate the front seats about the same on both crossover SUVs. Neither is tops in terms of comfort, but versions with power-adjustable and leather-upholstered seats provide better support. Rear-seat riders will find decent leg room in both and the Blazer’s bench moves fore and aft to open up more leg or more cargo room. 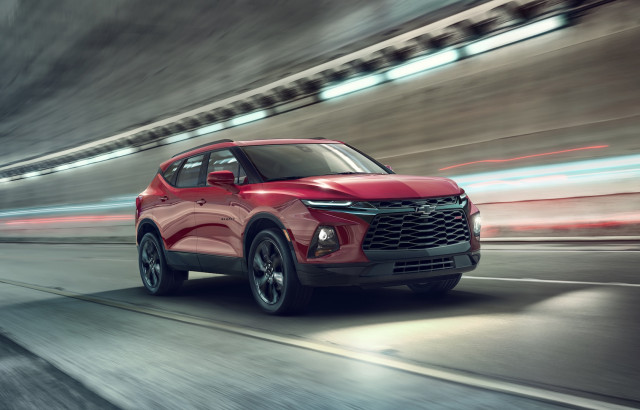 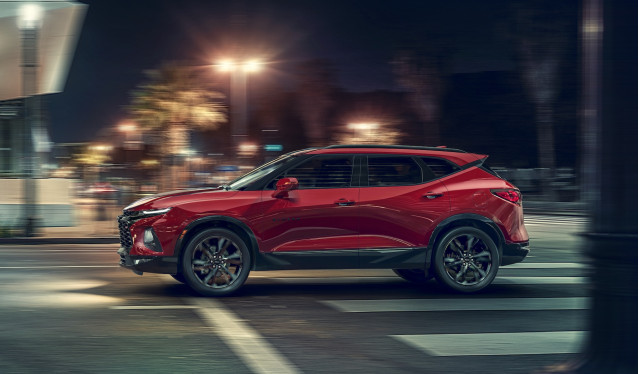 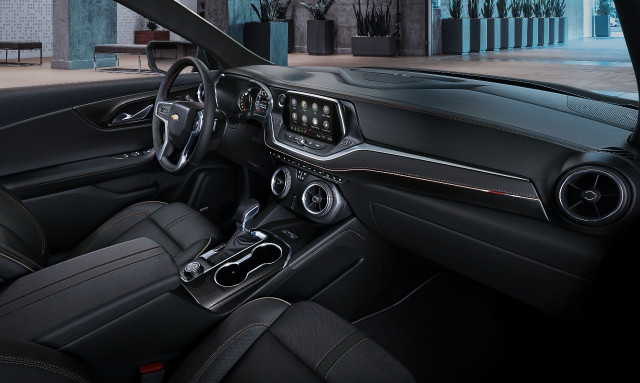 The Blazer’s stylish dashboard matches its exterior and its standard 8.0-inch touchscreen for infotainment with Apple CarPlay and Android Auto compatibility easily trumps the 4.2-inch display that’s standard on the Edge SE trim level. Upgrading to the Edge SEL nets a similarly sized screen, but that trim level costs about $3,300 more. The Blazer’s infotainment software is easy to operate and includes a convenient sign-in feature that stores certain driver-specific vehicle settings such as radio presets and memory seat positions in the cloud. The optional system on the Edge has a clean interface and lets drivers use Waze over Bluetooth.

With typical options such as leather seats, branded audio, and all-wheel drive, the Edge Titanium and Blazer LT both cost about $42,000.

No crash-test data is available yet for the Blazer, but we’ll mark it down no matter what for lacking standard automatic emergency braking. Adding life-saving collision-avoidance tech means optioning up a Blazer to around $50,000. That’s outrageous considering not only is automatic emergency braking standard on the Edge, automakers including Chevy have agreed to fit the tech to nearly every new car by 2021. The NHTSA rates the Edge at five stars overall, but it missed out on an IIHS Top Safety Pick award due to subpar headlights.

Because of the Blazer’s surprising automatic emergency braking upcharge, the version we recommend costs about $10,000 more than a nicely equipped Edge. Whether the Blazer’s retro name and its futuristic style are worth that is up to you and your pocketbook.

Front Wheel Drive Read Full Specs
Front Wheel Drive Read Full Specs
Compare Free Dealer Price Quote
With competitive price quotes from multiple dealers, you will be prepared when you meet your local car dealer. Please tell us how to contact you so that dealers can compete for your business!
2019 Ford Edge
There are no Ford dealers in our network that are located near the ZIP code.
2019 Chevrolet Blazer
There are no Chevrolet dealers in our network that are located near the ZIP code.
Thank you!
We have sent your request for price quotes on the 2019 Ford Edge and 2019 Chevrolet Blazer to the dealers you requested. They should be in touch shortly.
The Car Connection's dealer quote process is powered by our partner site CarsDirect.
Your request for a fast, free price quote on a 2019 Ford Edge and 2019 Chevrolet Blazer is in process. The CarsDirect Dealer(s) listed below will contact you shortly to discuss your request and to provide a quote. If you have questions now, you can contact the dealer(s) directly using the information provided below or contact CarsDirect's award-winning customer service team at 1.888.CarsDirect (1.888.227.7347) or [email protected]
For your reference, your customer transaction number is .
Tell us a little bit about yourself
Looking for dealers in your area...

*As configured. Excludes taxes, title, license and other customary fees, such as dealer documentation fees, tire and battery disposal fees and, where applicable, finance charges. By clicking on “Get Your Price Quote Now”, you agree to our Terms of Use (including the Supplemental Terms) and Privacy Policy. You further consent to being contacted at the number you provided by CarsDirect and certain participating automotive dealerships, which may include autodials, text messages, and/or pre-recorded calls; this consent is not a condition of purchase or service. Message and data rates may apply.
Have feedback about this experience?
Let us know.
Tags:
2019 Compare Cars Crossovers Ford Edge News Ford News SUVs
2021
The Car Connection
See the winners »
2021
The Car Connection
See The Winner and Nominees »