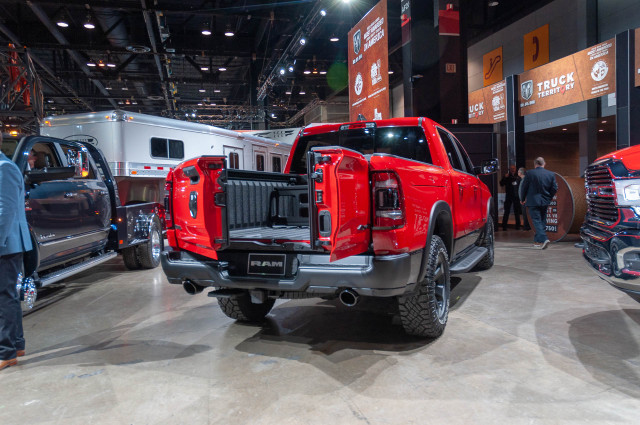 Pickup truck tailgates no longer simply open, close, lock, and unlock. The 2019 Ram 1500 soon will be available with a tailgate that can either drop down or be opened in a 60/40 split, similar to barn doors.

The truckmaker debuted the new tailgate setup Wednesday ahead of the 2019 Chicago Auto Show. Ram dubs it the Multifunction Tailgate and it costs $995 on any of the seven Ram 1500 trim levels. The tailgate features conventional hinges at the bottom that allow it to be flopped down as a single piece, or its two doors are hinged at the side and can be opened individually. The tailgate's handle is on the left side, which is the larger of the two portions.

There are a total of five configurations: closed, open flat, left door open, right door open, or both doors open. The doors swing open 88 degrees, so they're not unlike the relatively unusual "barn doors" found on some SUVs or cargo vans. When the doors are open, the bed is easier to step into because a dropped-down tailgate isn't in the way. A center step to make loading even easier costs $295 extra.

Ram bills the setup as compatible with trailers that would normally get in the way of a dropped-down tailgate. Ram says the new tailgate has a 2,000-pound load rating, similar to the traditional tailgate.

Trucks with the new Multifunction Tailgate will arrive in dealers by the middle of 2019.