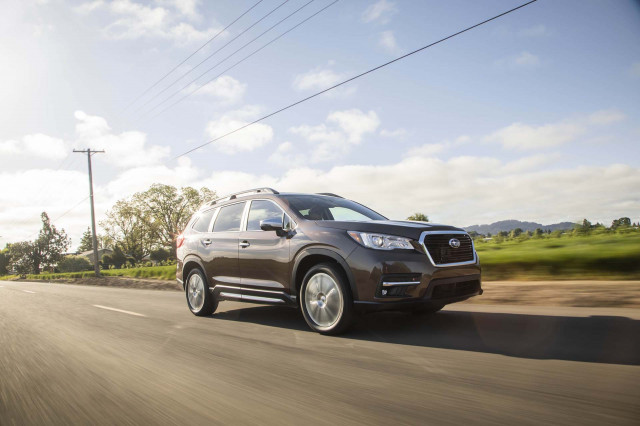 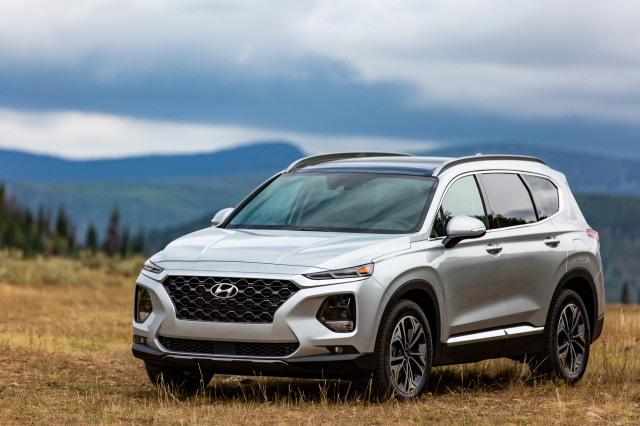 The 2019 Hyundai Santa Fe and 2019 Subaru Ascent are two crossover SUVs with similar missions to be comfortable family haulers. They take two surprisingly different paths to get there, however.

On our scale, both crossover SUVs will likely rate 6.8 out of 10 points, with the caveat that we’re rounding up the Santa Fe’s score based on our projections for the NHTSA’s crash test scores. That may sound like a tie, but these crossover SUVs have some notable differences.

By contrast, the 2019 Ascent’s base price is about $33,000. All Ascents use a 2.4-liter turbo-4 rated at 260 hp and all-wheel drive is standard. Adding leather upholstery and a few other options that make it equipped similarly to the Santa Fe Limited trim level pushes it to about $40,000. 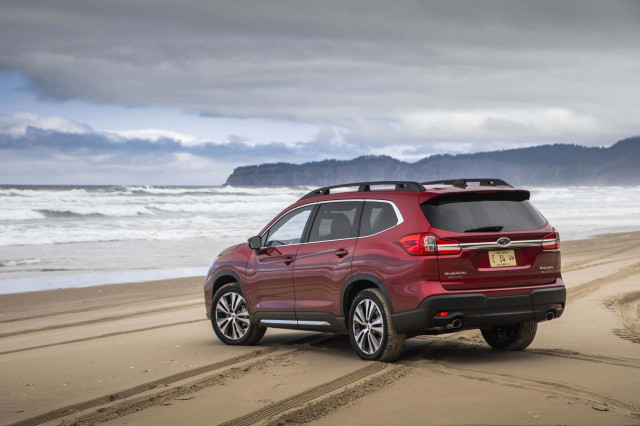 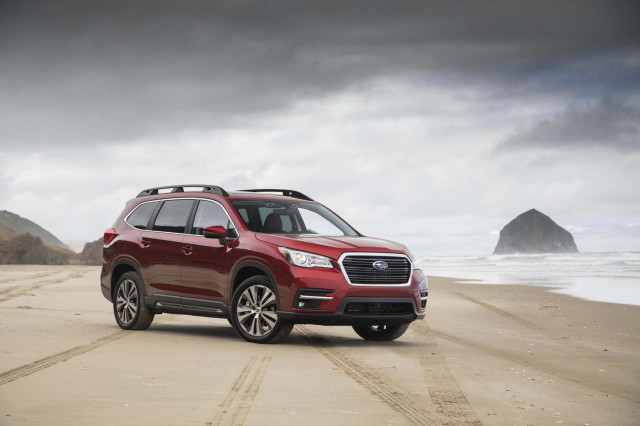 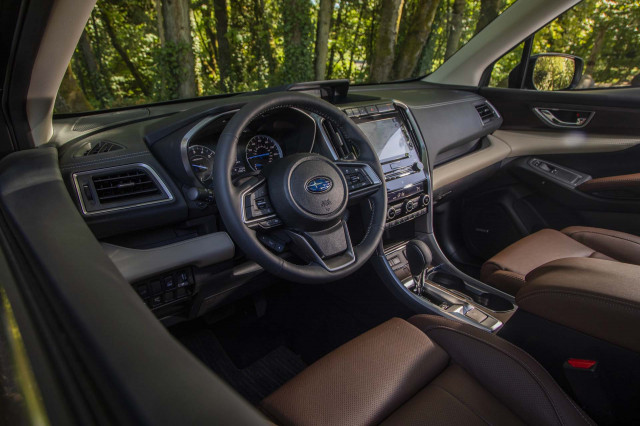 The Subaru’s price premium comes in part because it’s a considerably larger crossover SUV. In pictures, the Hyundai and Subaru don’t look that much different. However, the Ascent stretches almost 197 inches from bumper to bumper, about 9 inches longer than the Santa Fe. Its interior also houses a standard third row of seats, making it the default choice between the two for buyers interested in minivan-like utility with crossover SUV looks.

We like the way both crossover SUVs drive. The Ascent is considerably heavier, tipping the scales at around 4,400 pounds compared to about 4,000 pounds for a turbocharged Santa Fe. However, the Ascent’s extra power and its well-tuned continuously variable transmission (CVT) makes it feel faster off the line than the relatively slow-revving Hyundai’s engine and its upshift-eager 8-speed automatic transmission.

Quick steering makes the Ascent feel more nimble in town despite its larger size, but the Santa Fe’s slightly heftier steering settles in better for long highway slogs. In terms of their ride and handling, it’s basically a draw.

Neither is a serious off-roader, but the Ascent boasts 8.7 inches of ground clearance and a traction control mode tailored to slippery surfaces.

Base Santa Fes are relatively spartan inside, but the Limited and Ultimate trim levels with the turbo-4 engine pile on more luxurious trim and attractive surface finishes. We’re especially fond of the warm hue to the headliner, which stands out in a sea of light gray used in nearly every other new car (including the Ascent).

Comfortable front seats wrapped in leather upholstery come on turbocharged Santa Fes. The rear seat has good head and leg room but can be tight for three abreast. Behind the rear seat, the Santa Fe has about 36 cubic feet of cargo space, which grows to 71 cubes with the second row folded. 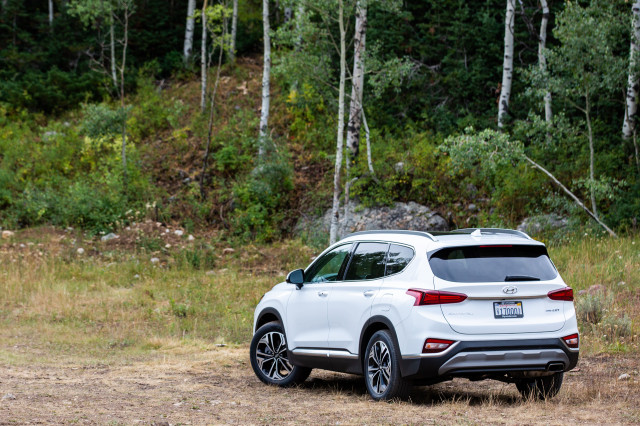 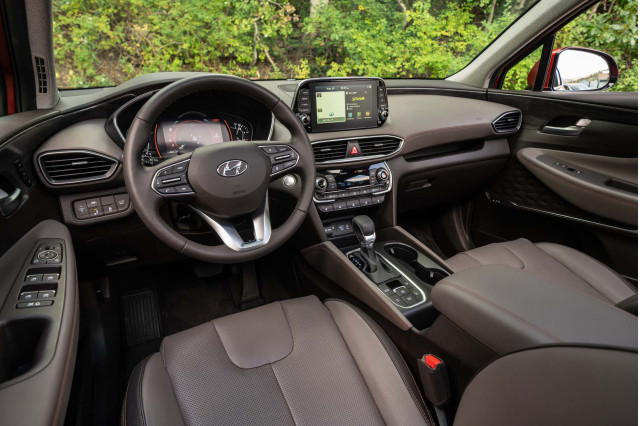 The Ascent has superior outward vision thanks to its relatively low window sills and narrower roof pillars. Its dashboard is a cacophony of angles and lines, but controls are arranged logically. Its front seats are comfortable and its third row offers superior leg and head room to the Santa Fe. On most trim levels, Subaru offers buyers a choice between a three-seat bench for the second row or two captain’s chairs with a narrow pass-through to the standard third row. The Ascent’s third row is easier accessed by scooting the second row forward at the tug of a couple of levers, however. Adults can sit in the third row for extended periods, which is something we can’t say about all three-row crossover SUVs.

Fold the Ascent’s third row of seats flat and it can swallow about 46 cubic feet of cargo. With the second and third rows flat, the Ascent holds an impressive 86 cubic feet.

The Santa Fe’s dashboard’s lines are elegant and simple. A 7.0-inch touchscreen for infotainment with Apple CarPlay and Android Auto compatibility is standard, while the Ultimate trim level includes an upsized screen with built-in navigation. All Santa Fes have four USB ports.

Subaru fits a 6.5-inch touchscreen for infotainment with Apple and Android compatibility  to the base Ascent, but all other trims use an 8.0-inch display. Subaru offers up to eight USB ports in the Ascent, including two in the third row.

Both crossover SUVs come well-equipped with active safety tech such as automatic emergency braking with pedestrian detection as well as adaptive cruise control. Blind-spot monitors are standard on the Santa Fe and are included on all but the base Ascent.

If the Santa Fe and Ascent aren’t perfect matches for you, it may pay to linger aound the Subaru and Hyundai showrooms a little longer.

The Santa Fe is sized between Subaru’s smaller Forester and its larger Ascent. The new 2020 Hyundai Palisade three-row crossover SUV should square off well against the Ascent, although its V-6 engine is more powerful and it comes standard with front-wheel drive.

7.0
Expert Rating
Life’s rich, but you don’t need beaucoup bucks to drive a well-equipped 2019 Ascent.
Read More
7.0
Expert Rating
The 2019 Hyundai Santa Fe is a good value in most trims, no options outside of trims keeps it from scoring higher.
Read More

*As configured. Excludes taxes, title, license and other customary fees, such as dealer documentation fees, tire and battery disposal fees and, where applicable, finance charges. By clicking on “Get Your Price Quote Now”, you agree to our Terms of Use (including the Supplemental Terms) and Privacy Policy. You further consent to being contacted at the number you provided by CarsDirect and certain participating automotive dealerships, which may include autodials, text messages, and/or pre-recorded calls; this consent is not a condition of purchase or service. Message and data rates may apply.
Have feedback about this experience?
Let us know.
Tags:
2019 Compare Cars Crossovers Hyundai Santa Fe News Subaru Ascent News Subaru News SUVs
2020
The Car Connection
See the winners »
2020
The Car Connection
See The Winner and Nominees »