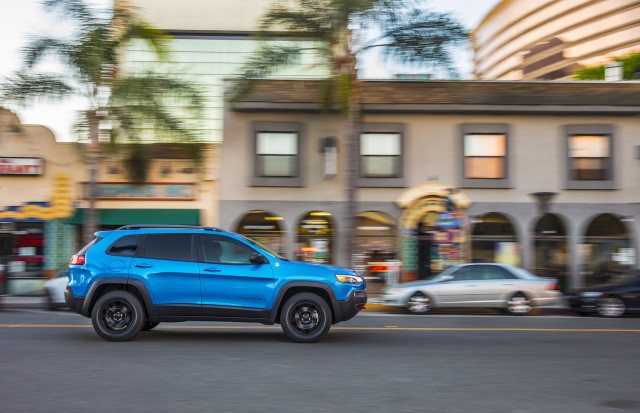 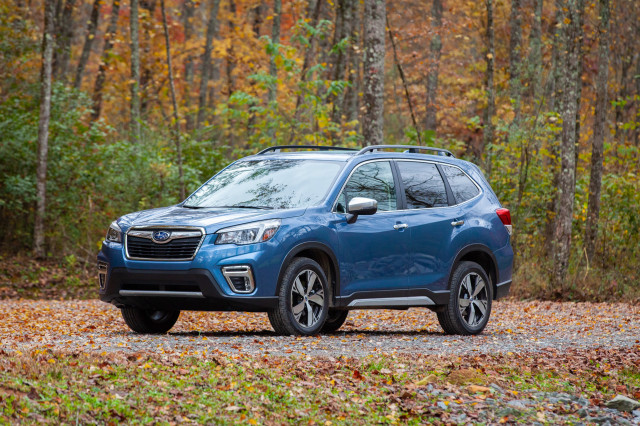 Crossover SUV shoppers looking to tread beyond paved parking lots might whittle their car-shopping lists down to two models: the 2019 Jeep Cherokee and the 2019 Subaru Forester.

These right-size, five-seat crossover SUVs deliver on the promise of four-wheeling capability in flashy brochures and advertisements.

The Cherokee’s score is helped by the breadth and depth of its lineup. It’s offered in more trim levels and powertrain combinations, with a far wider price range. Every Forester uses a 182-horsepower 2.5-liter flat-4 paired to a continuously variable transmission (CVT) that sends power to all four wheels. Fuel economy at 29 mpg combined is a stronger selling point than acceleration. The Forester moves adequately, but not hurriedly. 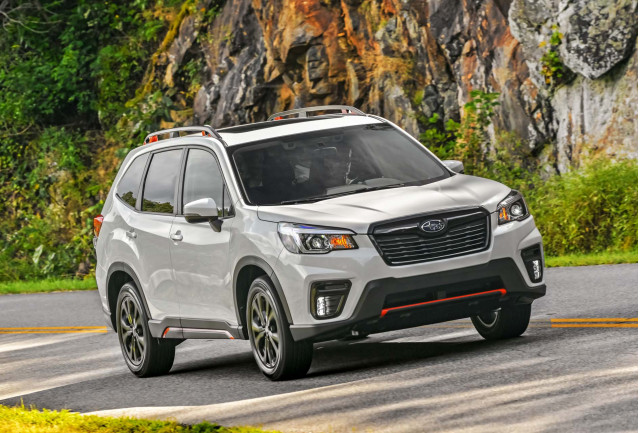 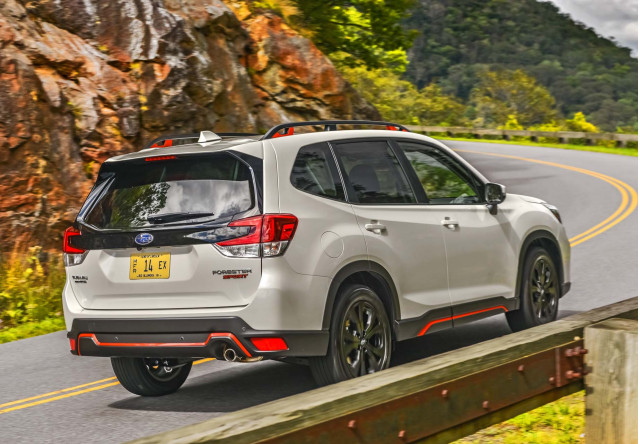 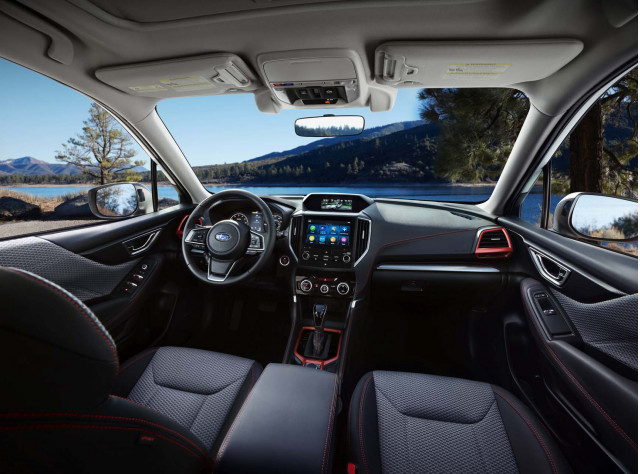 Base Cherokees use a 2.4-liter inline-4 rated at 180 hp, which seems like it would be a fair comparison to the Subaru’s engine. However, the Jeep’s engine is short on refinement and is paired to a 9-speed automatic transmission that can fumble its way through gears. The next step up is a 3.2-liter V-6 that makes 271 hp. New this year is a 2.0-liter turbo-4 that spins out 270 hp and is offered as a premium engine on all but the base Cherokee. We recommend either of the more powerful engines with the caveat that they’re much thirstier, with most models hovering between 22 and 24 mpg combined.

Jeep may have a deserved reputation for off-roading, but Cherokees in the Sunbelt are more likely to have front-wheel drive. Two available all-wheel-drive systems on the Jeep provide good traction in any situation. The Jeep Drive II system in the Cherokee Trailhawk features a simulated low range for more serious off-roading plus traction control modes for various road surfaces.

The Forester’s all-wheel-drive system is similarly transparent. A switch in front of the CVT lever engages an off-road traction control mode that Subaru says is equally useful in deeper snow.

All Forester trims—base, Premium, Sport, Limited, and Touring—have 8.7 inches of ground clearance. The Cherokee Trailhawk can clear similar obstacles thanks to its 8.7-inch rating and chunky all-terrain tires, but other trims sit much closer to the ground and have low-hanging bumpers that aid aerodynamics but can get caught on rocks.

The Cherokee Trailhawk is the off-road winner in this contest, but not by as much as many buyers might think.

The Cherokee and Forester are sized about the same outside, but they tell different stories inside. Massive windows, low sills, and a high seating position give all passengers in the Forester a commanding view of the road. The Cherokee is more compromised with its higher sills and beefy roof pillars.

Front-seat riders will find power-adjustable driver’s seats in higher trims of both crossover SUVs. The Forester reserves power adjustability for the Touring trim level’s passenger seat, while Jeep makes that desirable feature standard on Limited and Overland trims and optional on the Trailhawk. 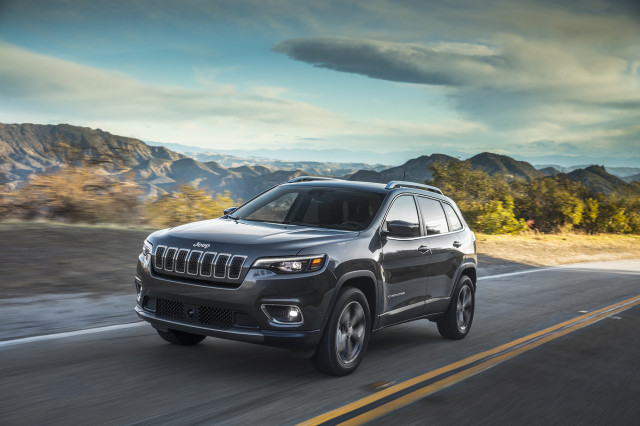 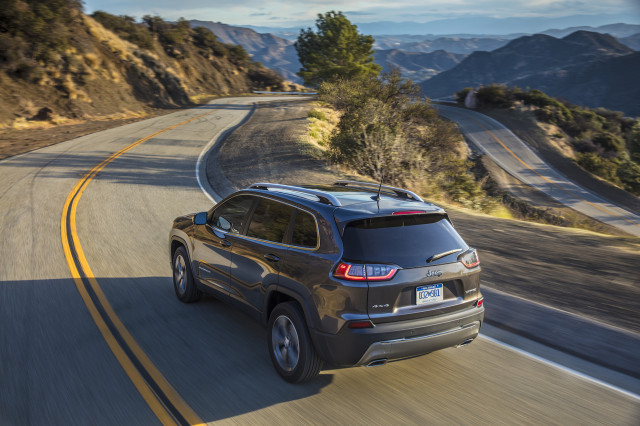 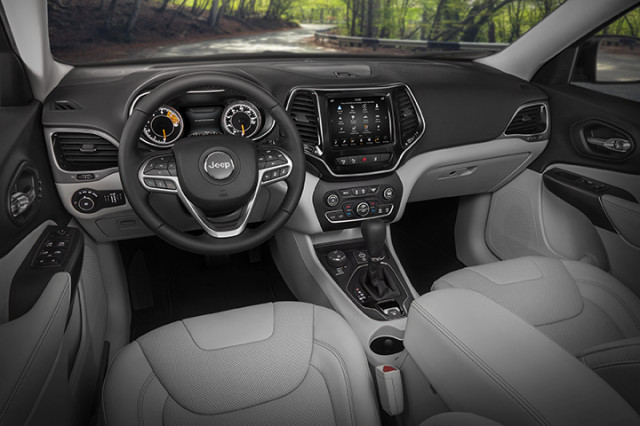 Rear-seat riders will find exceptionally wide-opening doors and terrific ingress and egress in the Forester. Once aboard, the Forester has far more head and leg room than the Jeep, too. Cargo space is also a runaway victory for the Subaru. Not only is its tailgate much wider, liftover height is lower and it’ll hold about 7 cubic feet more luggage with the rear seats upright. Fold the rear seats flat and Forester’s space grows to 76 cubic feet, while the Jeep trails at just 55 cubes.

We also applaud Subaru for making most active safety features standard in the Forester. On the Jeep, buyers will have to pay extra for automatic emergency braking, adaptive cruise control, and active lane control—and those features aren’t available on the popular Latitude and Latitude Plus trim levels.

The Cherokee Trailhawk makes more sense for adventurous shoppers, however, with its added ground clearance, improved all-wheel-drive system, and all-terrain tires. It costs about $34,500 to start, which is about the same as the range-topping Subaru Forester Touring. Add a few options such as active safety tech and the Cherokee Trailhawk can easily top $40,000. However, Jeep tends to offer much larger incentives on the Cherokee than Subaru does on the Forester, which can considerably reduce that price gap.

Still, we’d put our money on a Forester—a Premium with a few niceties costs less than $30,000 and represents one of the best values on a new crossover SUV today.

7.0
Expert Rating
With a range of models and host of options, 2018 Jeep Cherokee buyers can outfit their vehicles to suit their needs.
Read More
7.0
Expert Rating
The 2019 Subaru Forester is priced well for a compact crossover SUV.
Read More

Front Wheel Drive Read Full Specs
All Wheel Drive Read Full Specs
Compare Free Dealer Price Quote
With competitive price quotes from multiple dealers, you will be prepared when you meet your local car dealer. Please tell us how to contact you so that dealers can compete for your business!
2019 Jeep Cherokee
There are no Jeep dealers in our network that are located near the ZIP code.
2019 Subaru Forester
There are no Subaru dealers in our network that are located near the ZIP code.
Thank you!
We have sent your request for price quotes on the 2019 Jeep Cherokee and 2019 Subaru Forester to the dealers you requested. They should be in touch shortly.
The Car Connection's dealer quote process is powered by our partner site CarsDirect.
Your request for a fast, free price quote on a 2019 Jeep Cherokee and 2019 Subaru Forester is in process. The CarsDirect Dealer(s) listed below will contact you shortly to discuss your request and to provide a quote. If you have questions now, you can contact the dealer(s) directly using the information provided below or contact CarsDirect's award-winning customer service team at 1.888.CarsDirect (1.888.227.7347) or [email protected]
For your reference, your customer transaction number is .
Tell us a little bit about yourself
Looking for dealers in your area...

*As configured. Excludes taxes, title, license and other customary fees, such as dealer documentation fees, tire and battery disposal fees and, where applicable, finance charges. By clicking on “Get Your Price Quote Now”, you agree to our Terms of Use (including the Supplemental Terms) and Privacy Policy. You further consent to being contacted at the number you provided by CarsDirect and certain participating automotive dealerships, which may include autodials, text messages, and/or pre-recorded calls; this consent is not a condition of purchase or service. Message and data rates may apply.
Have feedback about this experience?
Let us know.
Tags:
2019 Compare Cars Crossovers Subaru Forester News Subaru News SUVs
2020
The Car Connection
See the winners »
2020
The Car Connection
See The Winner and Nominees »