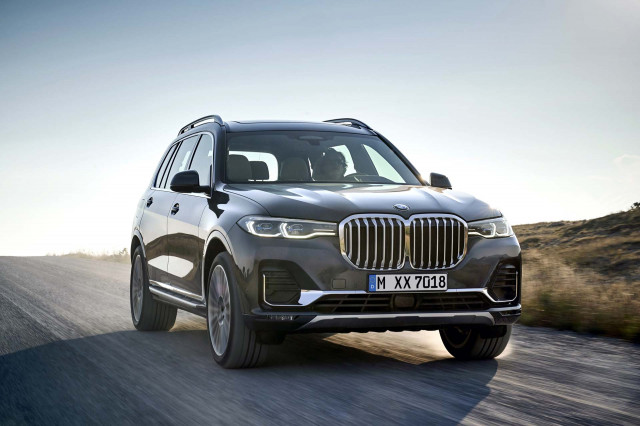 With the 2019 X7, BMW stands ready to take on the Audi Q7 and Mercedes-Benz GLS-Class. Finally. It's taken the German automaker a while to get the hint that well-heeled American families are eager to buy three-row crossover SUVs draped in leather with powerful engines under their hoods.

By those measures, the 2019 BMW X7 looks like it was worth the wait.

When it goes on sale in March of 2019, the 2019 BMW X7 will cost $74,895 to start including a mandatory $995 destination charge, and will stretch about 9 inches longer than the BMW X5. About half of that increased length comes between the wheels and the other half is behind its rear axle. As a result, the 2019 X7 has a far more spacious interior than the X5. Overall interior volume grows considerably to a maximum of 90 cubic feet of cargo space. 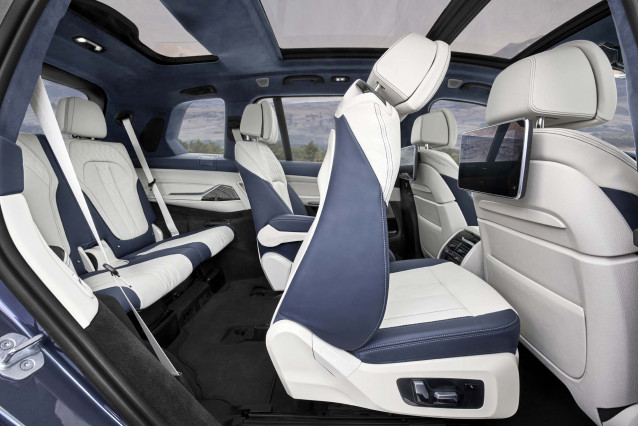 The X7 comes standard with three rows of seats and seating for seven passengers. A pair of captain's chairs for the second row will be on the options list, reducing capacity to six passengers. Front-seat occupants are treated to the best view out and the most space.

A 12.3-inch screen takes the place of conventional gauges, while a 12.3-inch touchscreen on the dashboard handles the infotainment system. The control knob situated on the center console handles most inputs, but BMW says the system will also learn a driver's preferences and common driving routes—artificial intelligence that should be familiar to most smartphone users. A standard audio system can be replaced by either a Harman Kardon stereo or a 20-speaker Bowers & Wilkins unit. All X7s include a wireless charging pad for mobile devices. 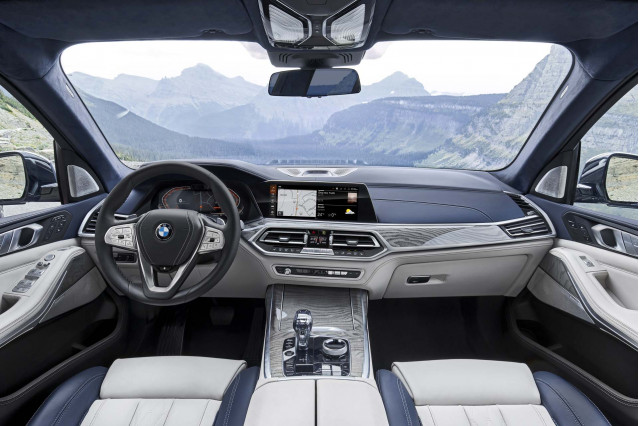 Wireless Apple CarPlay compatibility is included with the X7 for the first year, but it costs $80 annually to use after the initial trial period.

The X7 looks a lot like BMW's X5, with a massive front grille divided into BMW's signature "kidney" shape. From the side, its extra length is apparent. Its tailgate again looks like the X5. Both crossover SUVs are built in Spartanburg, South Carolina.

BMW initially offers the X7 with a choice of two engines paired to standard all-wheel drive and an 8-speed automatic transmission. The X7 xDrive40i uses a 3.0-liter turbocharged inline-6 rated at 335 horsepower and 330 pound-feet of torque. In the $93,595 X7 xDrive50i, a turbocharged 4.4-liter V-8 rated at 456 hp and 479 lb-ft of torque shuttles power through a beefed-up version of the 8-speed automatic.

The X7 rides on either 21- or 22-inch wheels wrapped in either all-season or high-performance summer tires, but BMW says that its 8.7 inches of ground clearance and available off-road traction control modes will give it four-wheeling abilities than most buyers are unlikely to tap into. A full air suspension system comes standard and can lower the X7 for easier cargo and passenger loading. The air suspension communicates with cameras that watch the road ahead and adjust the suspension ahead of changing road conditions. 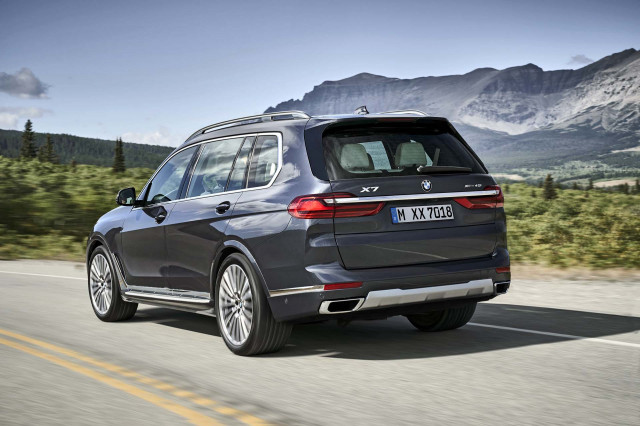 An optional Dynamic Handling Package probably better taps into the X7's real-world use with its active steering, upgraded brakes and, on V-8 models, a sport rear differential.

The traffic jam assist function also uses an interior camera to watch the driver's attentiveness. If it detects that the driver is paying attention to the road ahead, it won't demand that they put their hands on the steering wheel periodically.