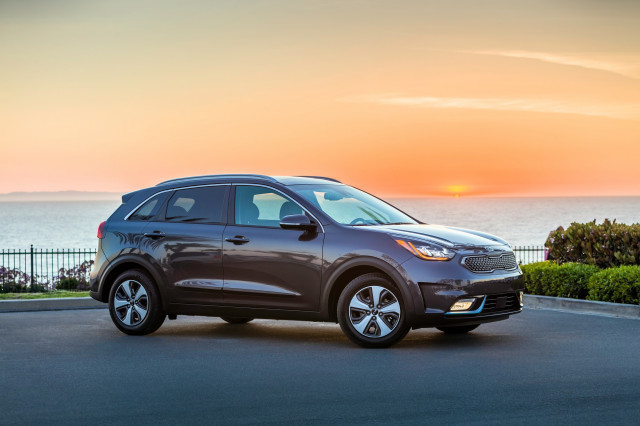 As automakers roll toward electrification there are various routes to take. Kia's taken a three-prong approach with a new hatchback called the Niro. It's available as a hybrid, plug-in hybrid, and soon an all-electric model, giving consumers the ability to choose what powertrain best fits their requirements and lifestyle.

The plug-in hybrid version of the Niro splits the difference between the hybrid and all-electric model with the ability to drive 26 miles on electricity alone, then flip into hybrid mode for long commutes or road trips with a 46 mpg combined rating.

With a TCC Rating of 6.4 out of 10, the 2018 Niro scores fpr a handsome, intuitive interior, well-priced plug-in model, and 40-mpg-plus fuel economy, but there's now all-wheel drive, acceleration is sluggish, and plug-in range is only average.

I recently spent a week hauling the kids to school, swim lessons, and running errands around town in the 2018 Kia Niro Plug-In Hybrid EX Premium. Here's where the Niro Plug-In hit, and where it missed: 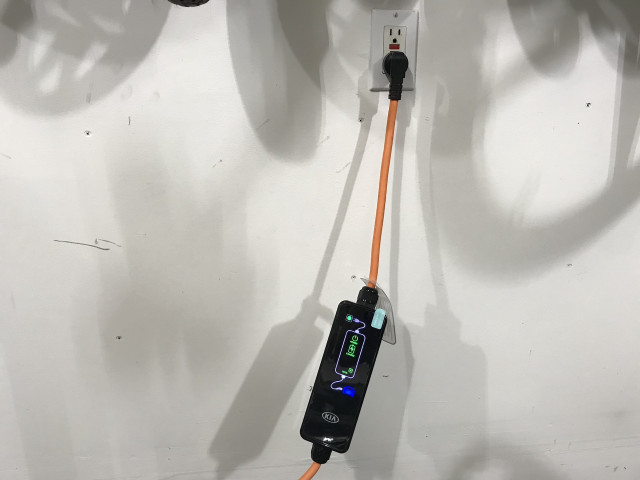 Hit: Great at-home charging experience. The supplied 120v charger is much lighter than the 120v/240v combo charger that comes with the Nissan Leaf, and puts far less strain on an outlet while dangling. It's also one of the coolest-looking electric-car chargers I've seen with bright neon colors that light up for the charging status. Looks count, right? 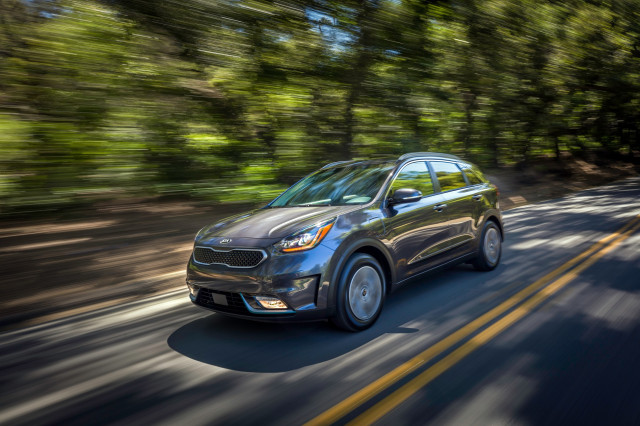 Miss: Not a smooth operator. It's one thing to be slow off the line, which the Niro Plug-In Hybrid is. It's entirely another thing to be slow and and lurchy during power transitions. The blend of friction and regenerative braking is seamless, but it's hard to creep forward in traffic smoothly. The situation is made worse by cheaper, single-motor hybrid system that is paired with  a conventional 6-speed dual-clutch transmission, which shifts regardless of whether the Niro is operating in all-electric mode or hybrid mode. Those shifts aren't particularly smooth, and are very apparent when operating in all-electric mode. 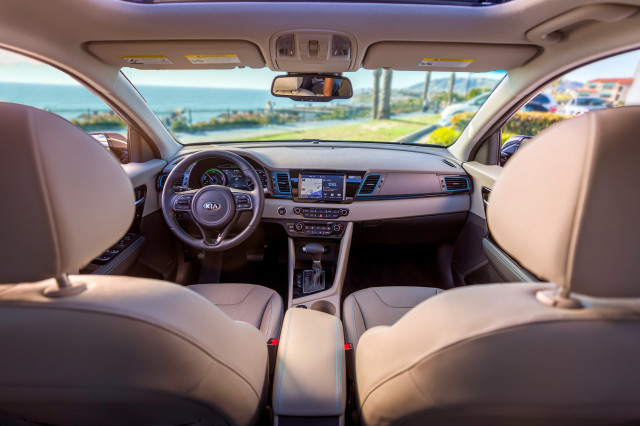 Hit: Well-executed interior. From the intuitive design and easy-to-operate controls to the actual packaging of the interior, Kia's done a terrific job with the Niro's interior. Two car seats fit easily in the back, there's 19.4 cubic feet of space to haul gear for an afternoon adventure in the cargo area, and the load floor is commendably low. 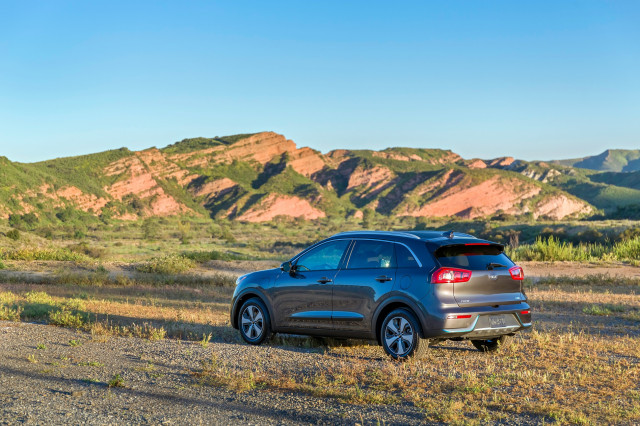 Miss: It's front-wheel drive only. Don't be fooled by slick sales people or advertising, the Niro isn't a crossover. It's a hatchback with a smidge of extra ground clearance for styling alone. No all-wheel drive is available, and the low rolling-resistance tires will provide no favors during inclement weather. Kia, a Subaru Crosstrek plug-in hybrid is coming. Pay attention! 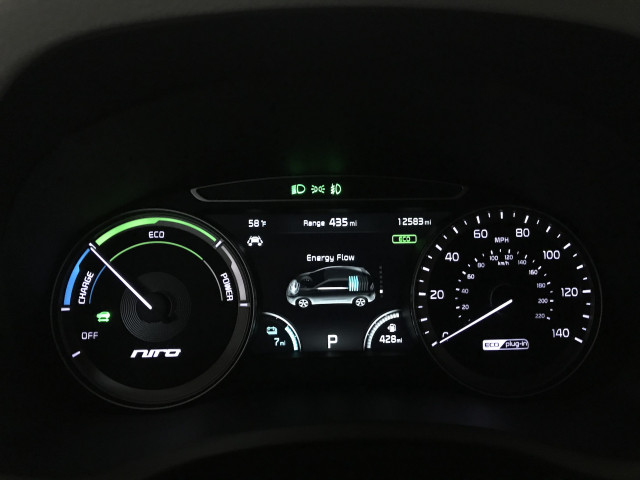 Hit: EPA-rated all-electric range might be conservative. With a full charge the Niro Plug-In Hybrid indicated an all-electric range of 26 miles, but each and every time I arrived home from the 25-mile journey to drop my kids off at school, an indicated 5 to 7 miles would remain. The route included suburban traffic on both highway and city streets with temps in the low 40s. It's clearly possible to get more than 26 miles of all-electric range from the 8.9-kwh battery pack, and I was by no means hypermiling or trying to be efficient. 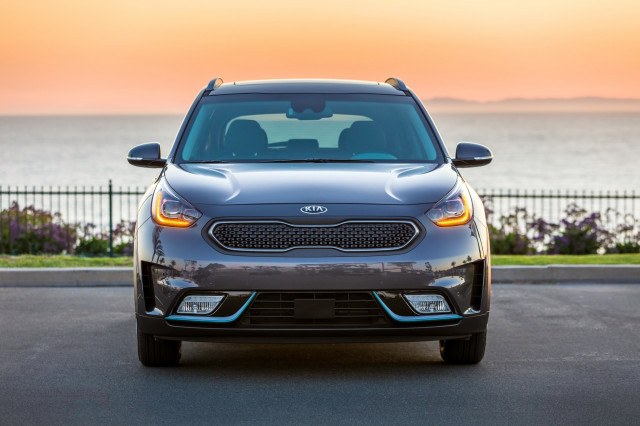 Miss: It refuses to stay completely all-electric. No matter the mode, no matter the amount of charge on the battery pack, if the accelerator is pushed past a certain point, the gasoline-powered engine will fire no matter what. The gasoline engine will also fire randomly after the car is turned on if it's chilly outside, such as the low 40s, for a moment to help get heat pumping into the cabin quicker.

At $35,575 (before local, state, and federal rebates available to some buyers) as tested, the Niro Plug-In Hybrid is priced in line with direct competitors. It featured everything one wants and would expect including LED headlights, dual-zone automatic climate control, heated leather seats and steering wheel, automatic emergency braking, adaptive cruise control, Harman Kardon sound system, and an 8-inch touchscreen infotainment system with navigation, Apple CarPlay, and Android Auto.  Available from about $30,000 the Niro Plug-In Hybrid is the stepping stone for those who want a really efficient hatchback but aren't ready to go all-electric yet.