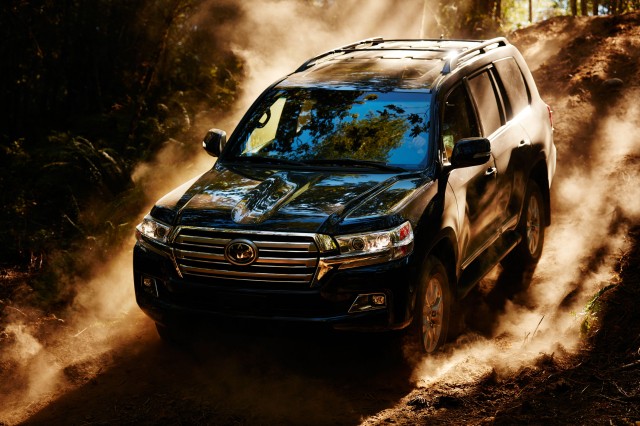 The 2018 Toyota Land Cruiser is confused about its identity. Does it want to be swathed in white paint and emblazoned with UN logos on its way to a war zone? Or would it rather be parked next to a Range Rover at a swanky restaurant Beverly Hills?

The answer is somewhere in between the two. It’s an SUV for cognoscenti looking for Range Rover capability that blends into the crowd, at least kind of.

Over the last 30 years, Toyota has taken the Land Cruiser decidedly upscale in the U.S. and the latest model drips with luxury—heated and cooled semi-aniline leather upholstery, individual screens for rear-seat riders, a suede-like headliner, and a thumping JBL audio system. For about $86,000, it should have all that and more.

Yet its roots show through in chintzy plastic trim on its center console and lower door panels, a gauge cluster better suited to a Corolla, and “wood” trim so fake it might have been printed on a Black Friday-sale HP Deskjet.

It’s a lumbering beast, the Land Cruiser, but one that most of us would gladly park in our garage. Sometimes it’s hard to explain what makes a vehicle so desirable. 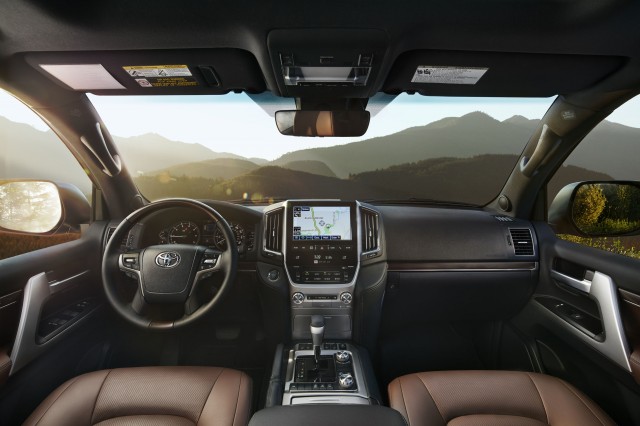 Hit: Old-school plush. It’s hard to imagine that 18-inch wheels are “small,” but they are compared to the 22-inchers many SUVs now wear. Riding on 18s means that the Land Cruiser has tall sidewalls, which combine with a softly tuned coil-spring suspension to deliver a comfortable, gentle ride over any surface.

Miss: Trucky roots show through. The Land Cruiser is a truck with truck abilities, which means its curvy road limits are low. Toyota’s Kinetic Dynamic Suspension System (KDSS) is a mouthful, but it works by putting hydraulic pressure on the enormous sway bars to keep the Cruiser upright. Still, at upward of 5,800 pounds, the Cruiser’s heft makes itself known in noticeable body lean. There’s just not as much lean as you’d get without KDSS

Hit: Astoundingly capable. The Land Cruiser will climb over just about anything. Its traction control has a mode for any situation.

Miss: Massively oversized for most trails. Despite the presence of a trick system that uses individual brake application to tighten its turning radius, the Land Cruiser is a beast of an SUV. Its size is a constant hinderance on tight trails the brand’s smaller (but still hefty) 4Runner will snake through.

Miss: Make yours an LX 570? The Lexus LX 570 addresses many of the Land Cruiser’s deficits…and it doesn’t cost more. Both are built in the same Tahara, Japan, assembly plant—Toyota’s flagship factory—and their differences aren’t skin deep. The Lexus has a dressier interior with real wood trim and even nicer leather, but its razor-sharp front end isn’t for everyone.

Hit: As subtle as 5,800 pounds can be. Everything about the Land Cruiser attempts to minimize its impact. From its Toyota badge that won’t raise eyebrows in the company parking lot to its extensive acoustic glass, the Land Cruiser tries not to brag. It’s the opposite of the brash Mercedes-Benz G-Class without the swagger of the Land Rover Range Rover.

The Land Cruiser hits its stride at speed on a wide-open highway, where its 381-horsepower 5.7-liter V-8 settles into a distant rumble and its 8-speed automatic transmission attempts to keep fuel consumption low. It’ll nip 20 mpg if driven gently, but in-town slogging drops that to just 12 mpg. On the bright side, it’s one of the only megabuck vehicles we can think of that’s rated to run on regular unleaded.

For all of its pluses and minuses, we love the Land Cruiser, conflicted identity and all.

The hits: Heritage, capability, and refinement in spades;