The Kia showroom of today isn't the Kia showroom of ten, or even five, years ago. The 2018 Stinger? It's proof that Kia no longer is happy with being an economy-car benchmark. Now it's aimed its sights at the big luxury brands and their sport-sedan standard-bearers.

The 2018 Stinger is a five-door hatchback that looks like a sedan, and acts like a BMW 3-Series in many ways. With turbocharged engine options, a rear-wheel-drive platform and all-wheel drive on the options list, the Stinger is serious about taking on the hallowed 3er, and others.

Scoring 7.8 out of 10 on our scale, it not only takes on the competition, it clobbers them. That score bests the 2018 competitors including the BMW 3-Series, Jaguar XE, Lexus IS, and even the Mercedes-Benz C-Class.

MORE: Read our full review of the 2018 Kia Stinger

I spent a week with the 2018 Kia Stinger GT2 AWD V6, and it's clear that rating is earned. I drove over 600 miles in the turbocharged hatchback both on the highway and around town with a full load of family and gear. Here's where it hit, and where it missed: 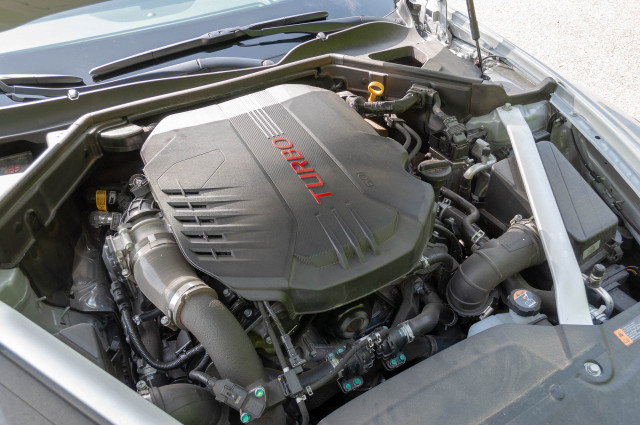 Hit: Turbo-6 is punchy, powerful, and sounds great. The 3.3-liter twin-turbo V-6 has 365 horsepower and 376 pound-feet of torque, While rear-wheel drive is standard, my tester had all-wheel drive. The power was smooth, abundant, and felt every bit as strong as a turbo inline-6 from BMW, which it actually sounded very similar to, by no coincidence I'm sure. 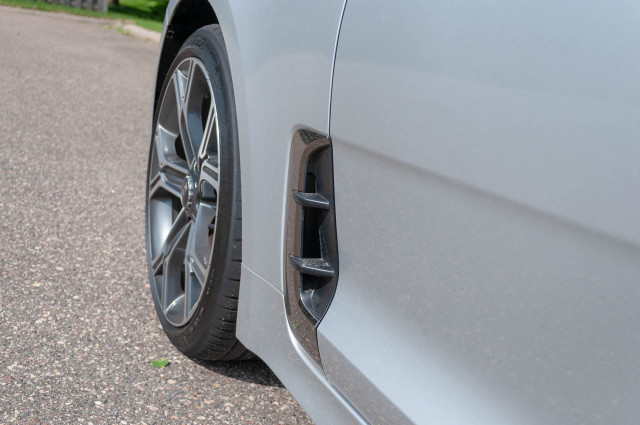 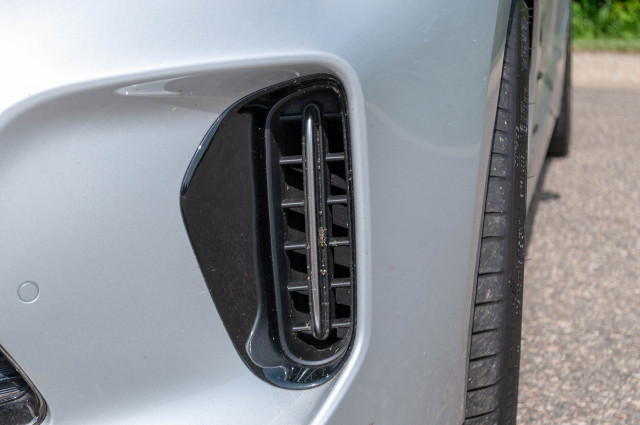 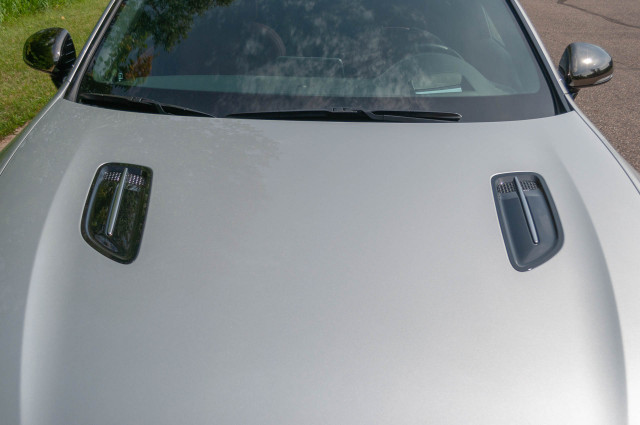 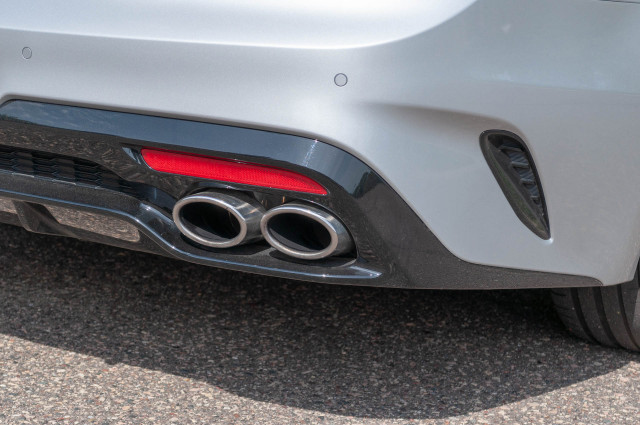 Miss: Fake vents aren't functional–they're useless. I can appreciate the air ducts in the front bumper that channel air into the wheel wells and back out the fenders, but the fake air vents on the hood, and fake vents on the rear bumper are cheesy at best. Removing them would do no harm to the overall design. Better yet, Kia, why not make them functional? 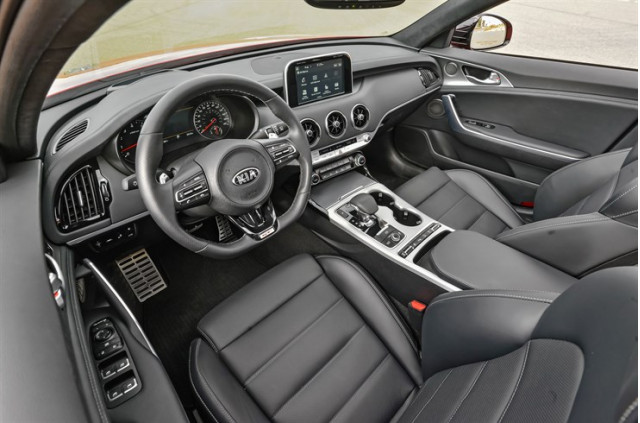 Hit: The interior is every bit as good-looking as the Germans. The Stinger's interior wouldn't be out of place in an Audi, and while the design isn't exactly BMW or Mercedes style, the overall look wouldn't be dismissed. It's sharp and well-appointed. Few if any cheap materials are used, and what is there will never be touched. 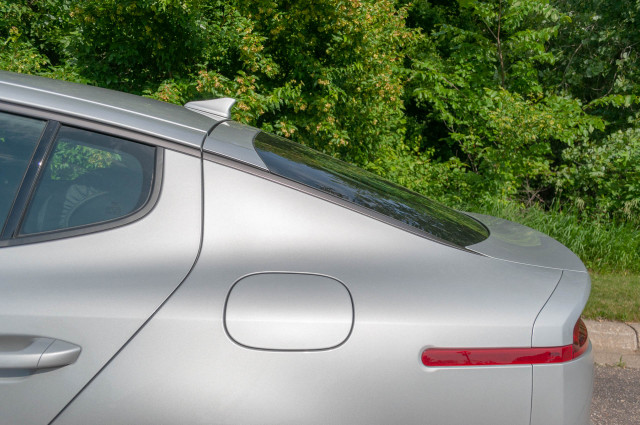 Miss: Squeaks and creaks. With just over 13,000 miles on my tester there was some creaks and squeaks that really shouldn't be present in a nearly-new car. The body would groan when the car crossed into a parking lot, a driveway, or pavement with big dips. The structure of a hatchback is different than that of a sedan, and it's harder to keep it structurally stiff. Then again we've never heard a new rival make these noises. 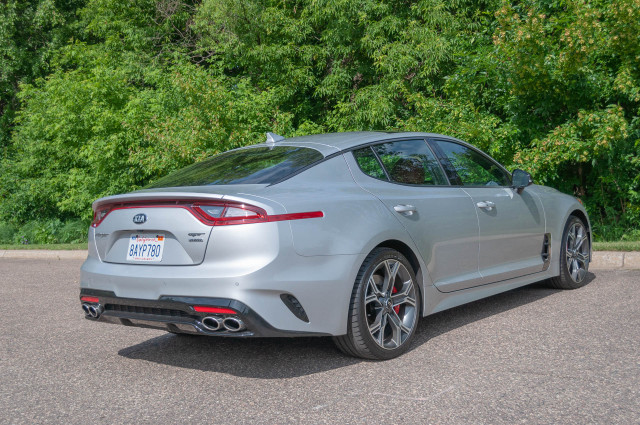 Hit: It's really sharp. In what might be the first time ever in a Kia, it was hard to drive anywhere and not draw attention. Pickup trucks drivers cranked their neck to get a look at the Stinger as it went by. People stared as it rolled past in a parking lot. Even I did a double take as I walked away after parking. It's just sharp.

With a price tag and equipment list like that, the 2018 Stinger isn't the inexpensive Kia that built the brand. A comparably equipped BMW 4-Series would be at least $10,000 more, and it wouldn't be $10,000 better. That's brand-building of an entirely different kind.

The misses: No manual transmission, some styling quirks, groans and creaks