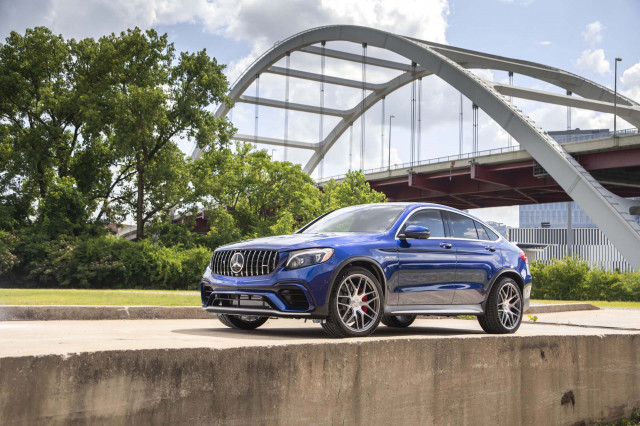 Crossover SUVs are the new black, and the luxury segment has hopped onto the bandwagon like fruit flies to a watermelon. Mercedes-AMG's latest salvo in this craze? The 2018 GLC63 and 63 S coupe.

These two AMGs take the pedestrian GLC-Class, itself a tall-wagon version of the Mercedes C-Class, and shoehorn a 4.0-liter twin-turbo V-8 with track-ready bits behind the sheetmetal.

Scoring a 7.8 out of 10 on our scale, the GLC-Class bests everything in its class—but that score is calculated based on the entire lineup.

Ferocious compact crossovers are rare, although that'll change once BMW's M division hops up the latest X3 and and Audi Sport sets its sights on the an RS Q5. The Porsche Macan Turbo with the optional Performance Package comes close at 440 horsepower to the GLC S' 503 ponies, but sporty cars have always been about numbers.

Instead, the closest rival to these AMG-ified GLCs is the Alfa Romeo Stelvio Quadrifoglio with its 505-hp, Ferrari-lite V-6 under its comely hood.

To get a better sense of what the 2018 Mercedes-AMG GLC 653 and 63 S Coupe are all about, Mercedes sent me to Nashville, Tennessee, to experience these ridiculously powerful crossover SUVs on some twisty country roads. Here's where they hit, and where they missed:

Hit: Intoxicating power. The GLC63 fires 469 horsepower and 479 pound-feet of torque to all four wheels. If that's not enough, the GLC63 S Coupe takes things up a notch with 503 hp and 516 lb-ft of torque. Sprinting from 0-60 mph happens in 3.8 seconds and 3.7 seconds, respectively The noise that comes along with that experience simply can't be put to words.

Miss: Expensive, and that's before options. These compact crossover SUVs don't come cheap. The AMG GLC63 starts from $70,895 while the 63 S Coupe starts from $81,745. My testers were optioned into the $90,000-range and even at that price they still lacked the cooled seats that could have come in handy in sweltering Tennessee.

Hit: Supremely comfortable. These powerful luxury crossover SUVs sport AMG badges (everywhere, I lost count) and have a ton of power, but they are still wearing the three-pointed star from Mercedes-Benz. That means they still have something in common with the plush Mercedes-Maybach. Even in AMG tune, the GLC63's suspension isn't jarring over broken pavement, and the sport seats are supportive without being too confining or hard.

Miss: It's not a coupe. A coupe has two doors, and the GLC63 S Coupe has four. What's that mean? It's not a coupe. That sloping roofline also makes it far less useful than its taller sibling, and vanity is still a silly thing to pay a premium for.

Hit: The interior might as well be on display. Directly related to that of the C-Class sedan is a good thing when it comes to the interior, as it's stunning. The flowing, flamboyant shapes shine throughout the cabin while round vents accent the tablet-like infotainment screen. It's hard to stand out in this segment, but the GLC's interior nails it.

Miss: The less useful version is the faster one. Sure you might not feel the loss of 34 horsepower and 37 pound-feet of torque, but the guy that buys the 63 S Coupe knows he was able to purchase more power than your measly GLC63, and that's not cool.

At $91,150 for the 2018 GLC63 and $97,330 for the 2018 GLC63 S Coupe, the two I drove were far from cheap. Both were well-equipped with upgraded 21-inch alloy wheels, head-up display, panorama roof, performance exhaust system, carbon fiber trim bits, LED head and taillights, and active safety tech.

You'll pay a price for this AMG GT-derived performance, but these two German are worth the coin.

The misses: Expensive safety options, Coupe is not a coupe, but you have to opt for it to get S power