2019 Mercedes-Benz Sprinter first drive: generational shift, but as useful as ever 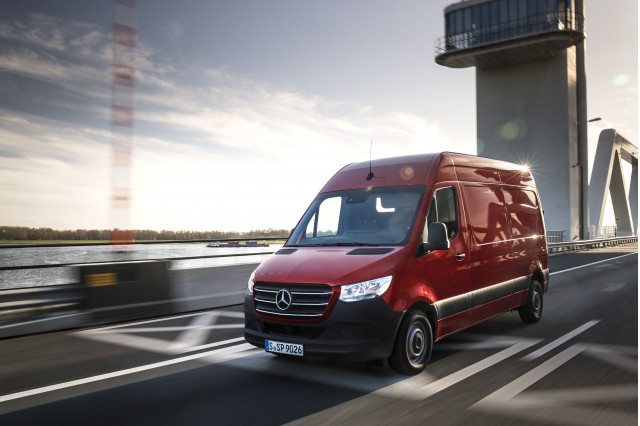 When you consider that new-car life cycles are usually measured in years, not decades, it seems silly to describe new models as “generations.” The Mercedes-Benz Sprinter is an exception: the 2019 Sprinter is only the third generation of Mercedes-Benz’s flagship van since its introduction in 1995, and the first new iteration in twelve years.

On the outside the 2019 Mercedes-Benz Sprinter does not appear entirely new, but within the full-size van sits a slew of technologies meant to make it a leader in the commercial fleet segment well into the future.

The 2019 Sprinter is a coming out party of sorts for the Mercedes-Benz “adVANce future initiative.”

We see what you did there, Mercedes.

First introduced in 2016, adVANce is the company’s effort to re-imagine its commercial fleet as a “provider of integrated transport and mobility solutions” rather than simply a manufacturer. In the case of the new Sprinter that includes Mercedes Pro connect, which brings real-time logistics to small and medium-sized fleets that until now would only be feasible for larger companies. Using PRO connect, fleet managers can monitor the fuel levels, location, and communications of their Sprinters. The system is great for fleet efficiency, especially in urban markets with on-demand delivery needs, a specific target for Mercedes-Benz. Drivers may feel the loss of some autonomy, though; PRO connect makes it nearly impossible to “bluff” extra miles to sneak in a quick trip to the mall.

As “delivery drivers” with a task to carry out, we left Rotterdam in the Netherlands en route to a hardware shop where we picked up our cargo—an empty drill box handed to us by a very enthusiastic gentleman behind the counter. From there we “delivered” the small briefcase to the “job site,” which may or may not have also been where we were having lunch. As silly as that might sound on its face, the experience gave us a good sense of how the new Sprinter gets along in the day-to-day traffic typically experienced by the drivers who work in them. For all our fellow drivers knew, we were blue-collar Rotterdamians making our rounds in a Sprinter configured as a pickup with a lot of wood strapped down in its bed, and were treated by motorists in Golfs as such. The locals took us seriously enough, giving us space at intersections and assuming we had a handle on where we were and the rules of the road.

The wide berths were appreciated but unnecessary; the new Sprinter is slim enough that you never feel iffy even in tighter urban settings. This particular one had a manual transmission and drove beautifully; it’s easy to forget you’re in a large van (or pickup). 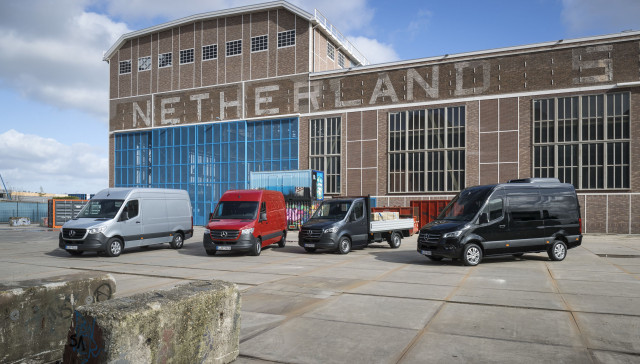 American Sprinter models will be offered with either rear-wheel or four-wheel drive, paired to a 7-speed automatic and a 3.0-liter turbodiesel V-6 rated at 188 horsepower and 325 pound-feet of torque. Eventually, Sprinters in the U.S. will also be available with a gas engine, but Mercedes is tight-lipped about what to expect.

A front-wheel drive option, that manual transmission from the Sprinter pickup we drove, and the all-electric eSprinter powertrain will remain in other markets, though there is much speculation about the eSprinter coming to the U.S. at some point. 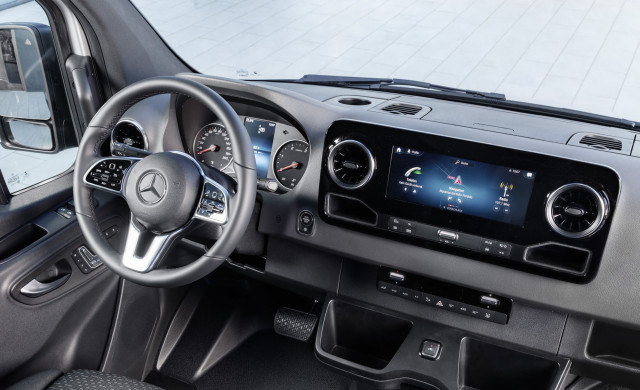 We spent some time in a 2019 Sprinter passenger van with the diesel V-6, which drove every bit as well as the pickup version and gave us a chance to better take in the new model’s interior and tech bits. The first thing to point out is the standard seat, which seems canted slightly forward and could use some lumbar support. Considerate fleet buyers will look to spoil drivers with the suspension seat, which can be calibrated to the driver’s body weight. The work van aspect of the Sprinter clashes with the “Mercedes-Benz” nameplate in the plastics used on its dash, which are fine but maybe could have been of a better quality; we noticed some creakiness around the touchscreen infotainment system which just shouldn’t be there, even in a work vehicle.

Mercedes Pro Connect is a part of its new MBUX infotainment system, which is a prominent feature in theSprinter. MBUX can be operated through touchscreen or steering wheel controls, but its voice control is the star of the show; meant to be operated as a Siri- or Alexa-style assistant, Mercedes’ hype around the MBUX voice control is well earned but like any system it has its quirks. For one, after using it the radio’s volume popped right back on where we just wanted it off. More problematic is the MBUX system’s sensitivity: instead of saying “Hey Siri” or “Alexa,” you activate voice controls simply by saying “Mercedes.”

Now, we don’t know how many times you’ll be saying the word “Mercedes” while driving your Mercedes; just know that any time you even so much as whisper “Mercedes,” the system will respond, interrupting music or navigation or anything else you have going on at that moment. It’s that sensitive.

Those are minor quibbles, however, as we didn’t find any major, glaring problems with the 2019 Mercedes-Benz Sprinter. As a work vehicle, the Sprinter has always driven at a level above and beyond what it needs to be, and this new generation is even better. Combine that with systems like MBUX and PRO connect and you may be seeing a new standard being set for fleet vehicles, either over the next decade or two or until the next-generation Sprinter is unveiled. Whichever comes first.