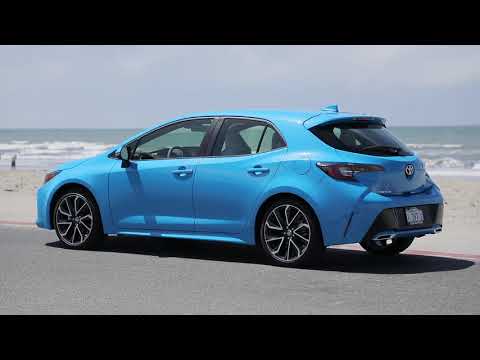 The same words have applied to the Toyota Corolla for nearly all of its 12 generations on sale in the U.S.: economical, practical, dependable, or smart.

Sporty? The Corolla has felt lazy like Sunday mornings sometimes.

The 2019 Toyota Corolla hatchback may change that.

This year, Toyota will sell two versions of the Corolla, and the first one we get in the States comes with an extra door. The four-door sedan is due later, even though most buyers likely will chose it more often than the hatchback.

Last year, the Corolla and Corolla iM were relatively distant cousins, the latter being a rebadged Scion when it was folded back into the Toyota fray. This time, the Corolla and Corolla hatch should be more closely aligned under the hood and inside. The hatch is our first look at a new Corolla, with new tech, and new engine with potential—and possibly bigger plans.

Toyota: We get the hint. The Corolla hatchback is available only in sporty grades, SE and XSE, with a 6-speed manual or a continuously variable automatic. The manual is rev-matching, and the CVT sports paddle shifters and a fixed first gear for better takeoff.

It gets a power boost too.

The hatchback is powered by a new 2.0-liter inline-4 that makes 168 horsepower, up more than 30 hp from last year, and it weighs the nearly the same as the outgoing model.

The 2019 Corolla hatchback has four-wheel independent suspension—something the Corolla sedan skipped last year—that helps cornering in the hatchback too. It’s stiffer too.

More power, better handling, same weight. Those are all the right noises.

Behind the wheel, the Corolla hatchback is comfortable, and calm—but not especially quiet. The added horsepower is nice, but not enough to transform into a sporty car. The CVT isn’t particularly refined, and it hamstrings the engine at passing speeds.

If you’re looking for lively, the manual is probably the best pick, but it needs more power to be sporty.

Inside, the standard 8.0-inch touchscreen with Apple CarPlay compatibility, more comfortable seats, and split folding rear seats aren’t necessarily sporty, but they don’t hurt either. Top-end versions get a premium stereo from JBL, and a mix of leather and cloth to keep the cabin interesting. CarPlay compatibility is new and was overdue from Toyota.

As far as practical and smart, the Corolla hatch does those things just fine. Its hatchback shape and cargo capacity make it useful for every day hauling. It’s a few inches shorter than the Civic hatchback, but both make for good runabouts for weekend detail.

MUST READ: 2019 Toyota Corolla Hatchback: a most international compact car

The cargo area measures 18 cubic feet with the seats up. The hatch has been constructed with a resin this year, which makes opening the back to stow gear easier with full hands. The wide rear opening and low load floor height are boons too.

We have nitpicks: the rear seats aren’t good for long legs and the door openings are small and awkward.

Toyota hasn’t yet announced how much it will cost, or fuel economy, but we expect to know more when it goes on sale in July.

It’s still a Corolla, and that’s not necessarily bad for most shoppers looking for economical and practical, smart and safe.

Toyota provided travel and lodging to Internet Brands Automotive to bring you this firsthand report.