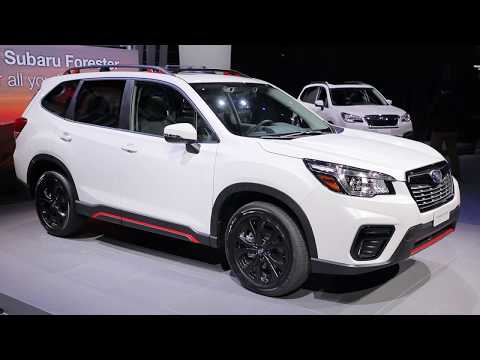 The 2019 Subaru Forester has its priorities in order. Safety first, fun later.

Its looks may be derivative, but the latest Forester packs a roomier interior loaded up with a lot more tech.

The 2019 Forester stretches about two inches longer than last year’s model and the majority of that new found space is in the rear seat. It’s now stretch-out comfortable.

READ MORE: 2019 Subaru Forester: the crossover SUV that watches you

Even better is the Forester’s upsized cargo area with its available power tailgate that opens extra wide.

But Subaru didn’t forget about drivers, that’s for sure. All models now have Apple CarPlay and Android Auto taking center stage on an updated dashboard.

A pair of cameras look out on the road ahead for standard automatic emergency braking, adaptive cruise control, and active lane control.

Step up to the top-of-the-line Forester Touring and there’s even an infrared camera that watches the driver.

The interior camera will sound an alert if it detects a driver nodding off or not paying attention to the road. It’s like a gentle slap from a protective parent.

The system’s facial recognition software also remembers up to five drivers. When it detects one of them behind the wheel, it automatically adjusts the driver’s seat and changes the radio presets.

Underhood, the Forester uses a 182 horsepower flat-4 engine paired to a continuously variable transmission. Don’t look for last year’s turbocharged Forester XT or the the manual transmission. They’re both goners.

Prices haven’t been set, but the 2019 Forester goes on sale later this year