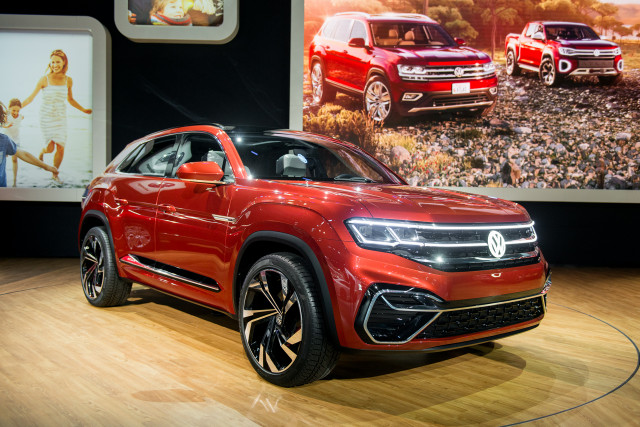 The Volkswagen Atlas will both shrink and expand in 2019.

Volkswagen will add a smaller five-seat Cross Sport model to the Atlas crossover SUV family for the 2020 model year, while it also will study a plug-in hybrid version with no confirmed production date.

Volkswagen confirmed the new Atlas Cross Sport at the 2018 New York Auto Show on Tuesday, and called the vehicle a “near-production concept.” With only minor changes expected from the concept shape, the Cross Sport will join the seven-seat Atlas on a production line in Chattanooga, Tennessee, in 2019.

Both Atlas SUVs derive from a family of VW front-wheel-drive, transverse-engined vehicles collectively dubbed MQB. The Atlas Cross Sport, though, sits 7.5 inches shorter than its seven-seat kin, though the wheelbase is the same.

The shorter body sits 190.8 inches long, and 68.3 inches tall. Its LED headlights frame a grille split by two horizontal bars, versus the three on the three-row Atlas. The difference between the SUVs becomes clear at the rear. The sharply raked rear end of the Cross Sport dons a big spoiler, and its wheel arches flare out with concept-car exaggeration. In essence, VW’s drawn a Range Rover Sport on a more restrained budget.

Tucked in at the rear wheel arch lies the clue to the Cross Sport’s advanced powertrains. A charging port opens so the Cross Sport can be plugged in to recharge its lithium-ion battery. It’s spun off from the current Atlas V-6, but outfitted for the next era of fuel-economy rules.

With a 2-kwh battery which replaces the larger one, a mild-hybrid version of the Atlas Cross Sport could net 310 hp and could accelerate to 60 mph in 6.5 seconds.

MORE: See all the debuts at the 2018 New York auto show

VW has outfitted the concept plug-in hybrid with a choice between E-Mode, Hybrid, GTE, Off-road and Battery Hold/Battery charge modes. E-Mode taps pure battery power and the rear motor for 26 miles of range, while it also declutches the gas engine from the drivetrain. In Hybrid mode—the default—the Cross Sport blends battery and engine power, and recovers braking energy to recharge the batteries.

GTE serves as a sport mode, one in which both motors and gasoline power combine for a maximum torque peak of 494 lb-ft. In Off-road mode, the vehicle sends power from the gasoline engine through the front motor to the rear motor by wire. In battery-hold mode, the engine maintains charge state to anticipate driving situations such as all-electric driving in an urban center.

The Atlas Cross Sport also has various traction modes the driver can select, from Eco to Comfort to Sport and Snow.

The concept displays output from its complex drivetrain on interior screens, which include a 10.1-inch central display with proximity sensors and gesture control. A separate 12.3-inch display replaces conventional gauges and puts navigation, phone, climate, and other information directly in front of the driver.

VW has more SUVs in the works. Another Atlas concept will be unveiled on Wednesday at the New York auto show; in 2020, VW plans to sell a battery-electric SUV patterned after its I.D. Crozz concept.