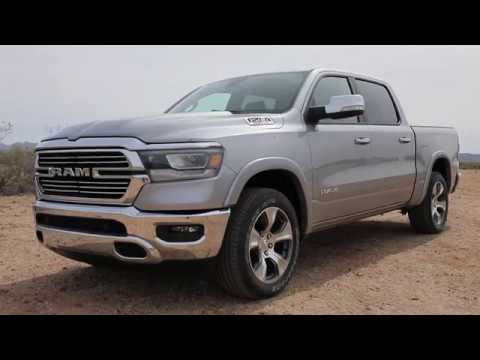 The 2019 Ram 1500 has fully adapted to the way most drivers use their trucks: livability trumps utility.

Sure, the latest Ram is powerful enough to lug a trailer weighing up to 12,750 pounds, but that didn’t matter to me as I took in the warm scent of leather and ran my hand across the rough-finish wood trim inside a megabuck Ram 1500 Laramie Longhorn. With adaptive cruise control engaged, the cooled driver’s seat gently whirring beneath me, Ryan Bingham’s signature West Texan twang blaring from the 19-speaker Harman Kardon audio system, and a full complement of passengers sprawled out in the ZIP code-sized interior, Ram’s newest truck felt more like a luxury liner than a heavy hauler as we hurtled along a quiet desert road on the outskirts of Phoenix.

Pickup trucks are all about numbers. For the 2019 Ram 1500, those numbers are 12 and four, and they have nothing to do with any ability to do more truck stuff. It takes an entire ruler to measure the 2019 Ram’s gargantuan available 12.0-inch, dash-mounted touchscreen. Four inches go into expanding the latest Ram crew cab’s wheelbase over last year’s model, with all that length devoted to improving cab space rather than bed length. Three of those inches are devoted to the rear seat, where passengers can stretch out with more room than Delta Comfort+ in a leather-wrapped bench that heats up or cools down with the press of a button. The extra inch goes toward the front seats, but that’s like adding an acre to Waggoner Ranch. Would they even notice?

The latest Ram will have a big story to tell under its hood, but I’ll have to share the details of that tale at a later date. The first Ram 1500s arriving at dealers now use the familiar 5.7-liter V-8 rated at 395 horsepower and 410 pound-feet of torque. Two mild-hybrids—a V-6 and a V-8—will follow later this year with 10-percent gains in fuel economy and a small boost in performance, but Ram isn’t revealing an on-sale date or specific numbers just yet. A turbodiesel is slated for next year with hints of a highway fuel-economy rating that exceeds 30 mpg.

The V-8 engine’s soundtrack is still NASCAR-worthy. This year, it’s ultra smooth thanks to a pair of voodoo magic canisters bolted to the frame that cancel out vibrations from a system that shuts off half of the engine’s cylinders under low-load situations. Ram promises big gains in fuel economy, but those numbers—like the hybrids’—are yet to come.

Underneath, the Ram’s new frame is also shaped specifically to hold up better in the event of a frontal impact—long a pickup deficit. Unfortunately, advanced safety gear like adaptive cruise control and automatic emergency braking is bundled in a package offered only on Laramie and higher trim levels.

The optional air suspension is plusher than before, but still tuned more for its ability to hunker down at highway speeds to increase aerodynamics. The standard coil springs deliver a cosseting ride, even if they don’t rise to the occasion at the press of a button for more off-road ability.

The smorgasboard of Ram 1500s I drove in Arizona were identical, except when they weren’t. I stormed through washboard dirt roads not just in the $60,000-plus Laramie Longhorn, but also the work-oriented Tradesman with its wash-out vinyl interior and the mid-level Laramie that’s $10,000 cheaper than rivals like the GMC Sierra Denali and Toyota Tundra 1794 but at least as nice.

Optional on Laramie and higher trims is the foot’s worth of infotainment, a highly configurable arrangement that’s stunning to behold and great to use. The pre-production Rams I drove in Phoenix had some software quirks that need to be worked out, but the automaker says that they’ll be ready to roll by the time they hit dealers next month. Fingers crossed.

If it’s four-wheeling you’re after, the Ram Rebel I drove at speed through a dry, sandy arroyo provided F-150 Raptor-lite thrills, but in a more palatable package. This year’s Rebel sits an inch higher than the rest of the lineup and includes meaty Goodyear Wrangler Duratrac tires and a differential lock, plus the questionable choice of an interior that marries black and red upholstery. At about $47,000, the Rebel offers a compelling, more practical alternative to the Jeep Wrangler Unlimited sold across the showroom for a surprisingly similar price.

For me, it’ll have to be the Laramie Longhorn. Its interior straddles the barb wire fence between luxurious and garish with saddle-hued leather and suede upholstery fighting with a Laramie Longhorn logo actually branded into the wood trim on the dashboard. My passengers, asleep in the reclining seats after a long day of driving, seemed to agree.