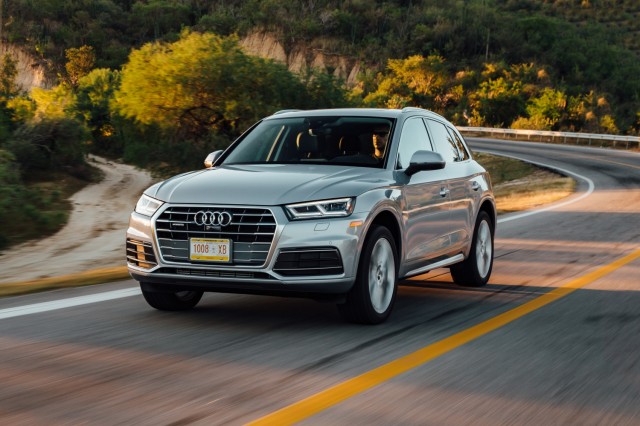 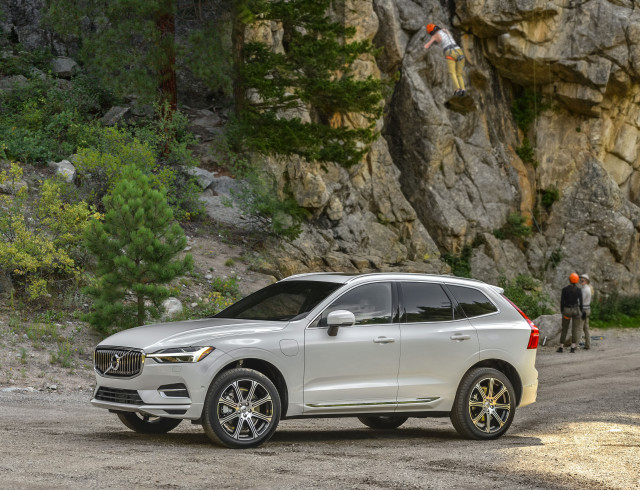 Compact crossover buyers are spoiled for choice. If you’ve whittled your shopping list to the 2018 Volvo XC60 and the 2018 Audi Q5, you’re on the right path. Both of these five-seat luxury crossovers benefit from beautiful attention to detail, comfortable interiors, high marks for safety, and they’re even available in blisteringly fast configurations.

We rate both the 2018 XC60 and the 2018 Q5 at 7.5 out of 10, a reflection of their shared attributes. The XC60 wins out for Volvo’s newfound emphasis on style, while the Q5’s refined engines earn it the nod for performance.

Both crossovers are sized about the same, but take different approaches to get there. The XC60 takes the restrained, elegant cues of the firm’s larger XC90 and pares them down for a two-row crossover. There are some differences, though: the XC60’s taillights are more expressive and its proportions are comparatively trim. The Q5 shares many cues with Audi’s larger Q7, but it strikes out on its own with a more curvaceous shape and the model’s signature, wide tailgate. 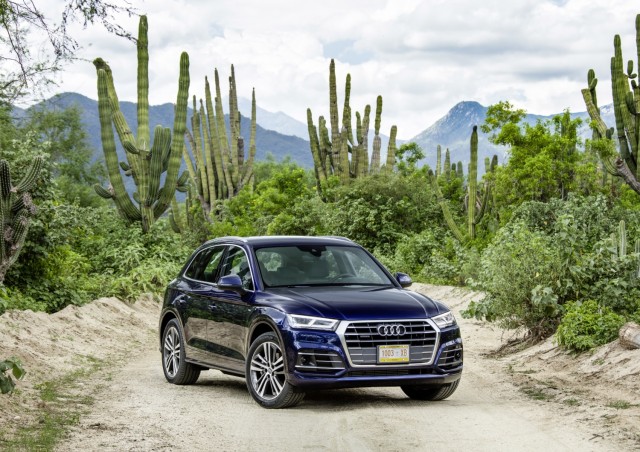 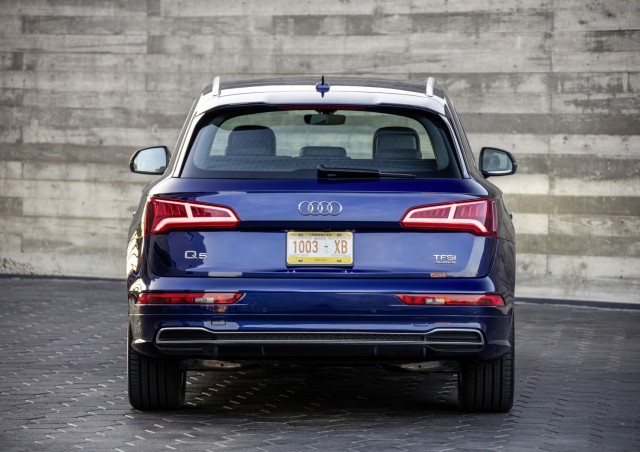 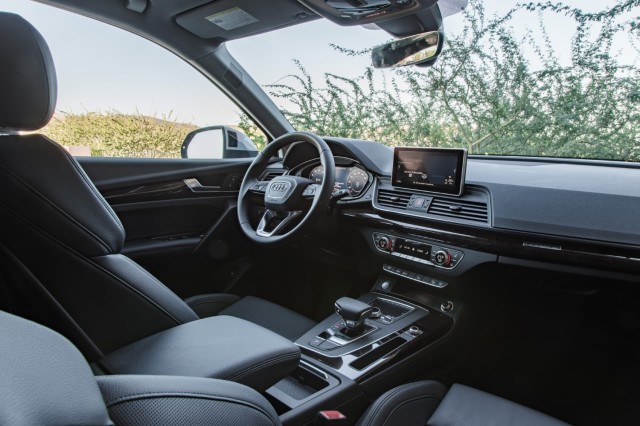 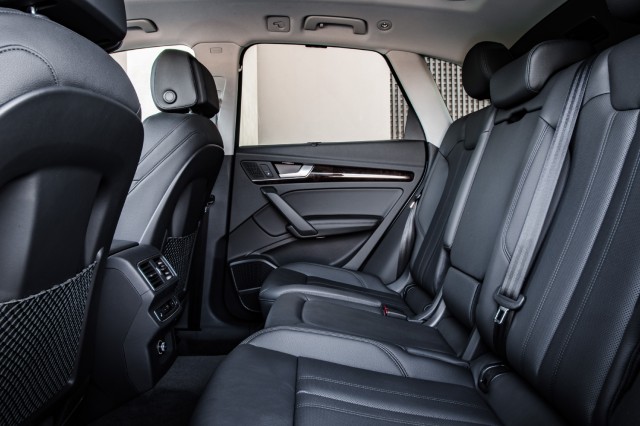 Inside, the XC60 is a dead ringer for the XC90. It’s this crossover’s strongest suit; it’s not as overwrought as the busy, button-laden Q5. The XC60 groups most controls in its vertically oriented 9.0-inch touchscreen, with few switches and knobs to be found otherwise. That’s not the case for the Q5, which has a fixed infotainment screen that feels out of place at upward of $50,000 for the models common on dealer lots. Both crossovers lavish on gorgeous materials, with open-pore wood and soft leather options available for those who want to dress things up even further. The XC60’s Bowers & Wilkins audio system deserves extra credit, although the Bang & Olufsen system that’s optional on the Q5 is certainly worthy of its ampersand, too.

The XC60 wins inside for its superb front seats, but rear-seat passengers will find a hint more usable space in the Q5. For cargo, the XC60 nudges ahead both with the rear seats upright and with them folded. Volvo quotes a maximum of 68.7 cubic-feet of storage space, while the Q5’s roofline intrudes to the tune of a 60.4-cube figure. Both crossovers offer roof rails, but you’ll need to work your way through the dealership’s accessories department for cross-bars if you intend to use the overhead rack.

Audi Q5 and Volvo XC60 on the road

Underhood, both crossovers look to small-displacement powertrains with added boost. All versions of the XC60 use a 2.0-liter inline-4. Pick the T5 and it’s a turbocharged unit rated at 250 horsepower. Volvo bolts on a supercharger for the 316-hp T6, while the range-topping T8 features an electric motor and and a 10.4-kwh battery pack good for a combined 400 hp and up to 20 miles of electric-only range.

The 2018 Q5 lineup starts with a 258-hp 2.0-liter turbo-4 that’s more refined than the Volvo’s unit, even though both models work well with their automatic transmissions (8 speeds in the Volvo, 7 in the Audi). Boasting an upgraded air suspension and a turbocharged V-6 that makes 354 hp, the SQ5 is a performance-oriented version of the Q5. The SQ5 takes a more traditional approach to going fast and zipping through corners than the XC60 T8, and it works better at that. The Volvo is less of a natural athlete and more of a sedate cruiser, which may suit many crossover buyers best. 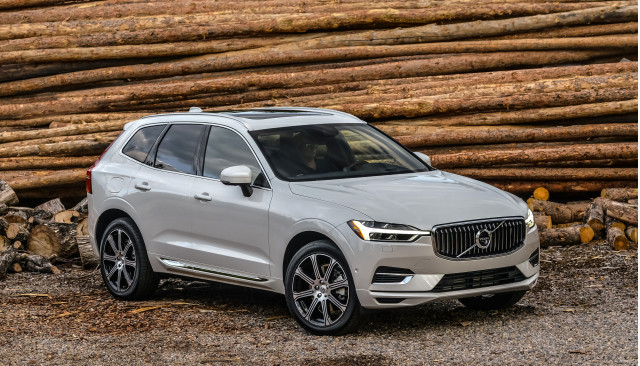 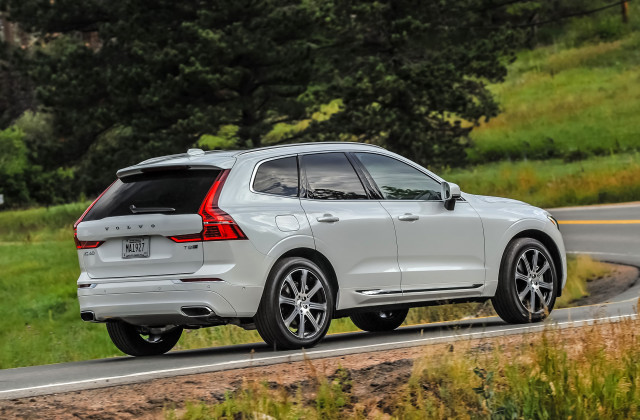 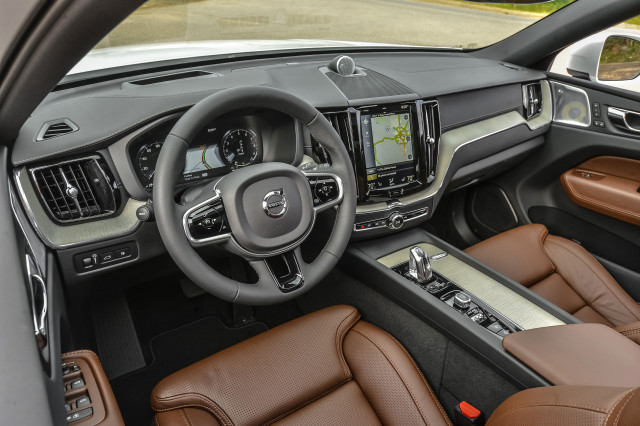 Four-wheeling isn’t really part of the picture for either crossover, and we doubt many will mind. Both come standard with all-wheel drive for 2018, but winter tires are recommended for snowy states, especially with the larger 20-inch wheels.

The Q5 nudges ahead slightly on fuel economy, but these two are neck-and-neck. Base versions of the Audi come in at 23 mpg city, 27 highway, 25 combined, per the EPA. The XC60 is rated at 22/28/24 mpg, and both are designed to run on pricier premium unleaded gasoline.

Neither crossover skimps on luxury, but they have different tales to tell. All come standard with automatic emergency braking that can bring these crossovers to a halt even without driver intervention.

Volvo is long associated with safety, and the XC60 is highly rated in what tests have been performed. The IIHS calls it a Top Safety Pick when fitted with the optional LED headlights on models with the Advanced package. However, the federal government hasn’t yet crash-tested the XC60, so the picture’s not totally complete.

The Q5 scores a Top Safety Pick and the feds give it a five-star overall evaluation.

In terms of value, it’s hard to pick a favorite. Both are better equipped from the get-go than rivals from Mercedes-Benz and BMW. A moonroof, leather seats, and Apple CarPlay/Android Auto compatibility that are standard on Audi and Volvo’s models cost thousands more on the GLC-Class and X3. The Q5 and the XC60 can be well-equipped with popular options for less than $45,000, and they feel downright lavish closer to $50,000.

Ultimately, it’s a tough call. The Q5’s rear-seat space and strong turbo-4 are impressive. Style-conscious shoppers and those who want more cargo room should head straight to their Volvo dealer.

7.5
Expert Rating
The Audi Q5 is certainly the segment's most modern offering, delivering a high degree of technology, comfort, and conservative style.
7.5
Expert Rating
With the new 2018 XC60, Volvo has cached all the XC90’s good data, and trimmed some fat from its code.

8.0
Expert Rating
Beautifully detailed, the Q5's interior is among the best in its segment.
Read More
9.0
Expert Rating
Put aside the great seats and space for a moment, and soak up the Volvo XC60’s exceptionally serene cabin.
Read More

All Wheel Drive Read Full Specs
All Wheel Drive Read Full Specs
Compare Free Dealer Price Quote
With competitive price quotes from multiple dealers, you will be prepared when you meet your local car dealer. Please tell us how to contact you so that dealers can compete for your business!
2018 Audi Q5
There are no Audi dealers in our network that are located near the ZIP code.
2018 Volvo XC60
There are no Volvo dealers in our network that are located near the ZIP code.
Thank you!
We have sent your request for price quotes on the 2018 Audi Q5 and 2018 Volvo XC60 to the dealers you requested. They should be in touch shortly.
The Car Connection's dealer quote process is powered by our partner site CarsDirect.
Your request for a fast, free price quote on a 2018 Audi Q5 and 2018 Volvo XC60 is in process. The CarsDirect Dealer(s) listed below will contact you shortly to discuss your request and to provide a quote. If you have questions now, you can contact the dealer(s) directly using the information provided below or contact CarsDirect's award-winning customer service team at 1.888.CarsDirect (1.888.227.7347) or [email protected]
For your reference, your customer transaction number is .
Tell us a little bit about yourself
Looking for dealers in your area...

*As configured. Excludes taxes, title, license and other customary fees, such as dealer documentation fees, tire and battery disposal fees and, where applicable, finance charges. By clicking on “Get Your Price Quote Now”, you agree to our Terms of Use (including the Supplemental Terms) and Privacy Policy. You further consent to being contacted at the number you provided by CarsDirect and certain participating automotive dealerships, which may include autodials, text messages, and/or pre-recorded calls; this consent is not a condition of purchase or service. Message and data rates may apply.
Have feedback about this experience?
Let us know.
Tags:
2018 Audi News Audi Q5 News Compare Cars Crossovers Luxury Cars
2021
The Car Connection
See the winners »
2021
The Car Connection
See The Winner and Nominees »