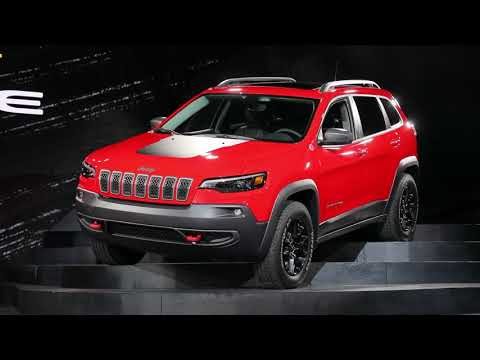 The 2019 Jeep Cherokee addresses its controversial design head on with an updated fascia and rear end that bring it more in line with its siblings, both big and small. Along with a new turbocharged engine, Jeep’s middle child should be better to drive and less polarizing to look at.

Jeep is retaining the current Cherokee’s two engines, but adding a premium 2.0-liter, turbocharged four-cylinder. With 270 horsepower and 295 pound-feet of torque, it’s negligibly less powerful than the 271-hp, 3.2-liter V-6 while offering much more than that engine’s 239 lb-ft of torque. While the 2.0-liter is the better all-around engine, getting the Cherokee’s 4,500-pound towing maximum still requires the V-6. For base models, Jeep will continue to offer a 2.4-liter 4-cylinder without any changes. All three engines feature stop/start technology and work alongside a 9-speed automatic transmission.

To go with the three-engine lineup, Jeep is offering three four-wheel-drive setups. The mid-grade Active Drive II and the Trailhawk-spec Active Drive Lock are unchanged. Both feature a two-speed transfer case with low range, while the Trailhawk’s setup gets a mechanical locking rear differential and a 51.2 to 1 crawl ratio. For the base system, Active Drive I, Jeep replaced the rear-drive module with a lighter unit.

That emphasis on weight reduction carried onto the new exterior. The new hood is aluminum and features a sloping design that blends into the headlights, which in the biggest departure from 2018 now integrate both running lamps and turn signals. What used to be headlights are now simple fog lights, and sit lower on the restyled fascia. The new front end isn’t entirely devoid of weirdness—the seven-slate grille still curves gently over the hood, creating a needle-nose like effect that in a market that’s increasingly moving towards more upright styling.

In back, the biggest changes is the new home for the license plate and tailgate release handle—Jeep moved both into the center of the tailgate, better integrating the Cherokee’s rear end with the Compass and Grand Cherokee. The shape of the new taillights isn’t dramatically different, but an LED ribbon and a subtle slatted-grille motif appears in each one, while the clear design ties in more closely with Compass.

In the cabin, Jeep made a concerted effort to improve the material quality, replacing stretches of boring black plastic with piano black and chrome trim. A redesigned cubby ahead of the shifter is slimmer and deeper, mirroring the shape and size of today’s smartphones while—it sits alongside the ports for the USB and auxiliary inputs.

Jeep hasn’t announced pricing for the 2019 Cherokee, but examples are set to arrive in dealers during the first quarter of 2018. Until then, look for our first drive of the refreshed Cherokee following the launch event in late January.