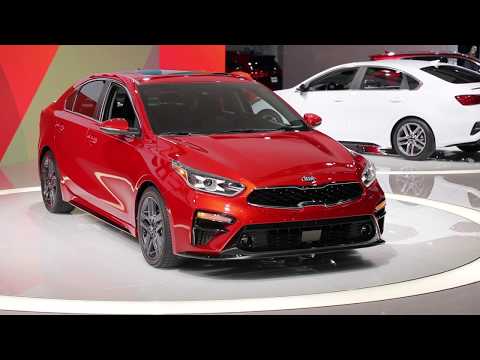 Where the Stinger is a rear-drive sports car designed to be a cut-rate Audi A7 Sportback, the 2019 Forte will trade on good fuel economy and a roomier interior beyond the outgoing model. Such is the mainstream compact four-door's life.

Offered initially in LX, S, and EX trim levels, the Forte grows considerably over its predecessor. Its overall length is up 3.6 inches to 182.7 inches, with much of that devoted to improved interior space. Its dashboard has been pushed toward the windshield for the illusion of even more room. It's marginally taller than its predecessor, even though the Forte's new exterior styling looks more "sports sedan" than "dowdy compact."

MORE: Read our full review of the 2018 Kia Forte

The biggest Stinger design cue is the Forte's long hood, made possible by Kia's decision to push back the compact sedan's windshield roof pillar base back by nearly half a foot compared to the outgoing Forte.

An 8.0-inch touchscreen for infotainment is standard equipment on the Forte and it's Apple CarPlay and Android Auto compatible. A wireless charging pad will be on the options list alongside a 320-watt Harman Kardon audio system.

Under its long hood, the 2019 Forte is fitted with a less-than-sporty 147-horsepower, 132 pound-feet of torque 2.0-liter inline-4 that uses tech normally reserved for hybrids to eke out a few mpg rather than extra power. Its engine runs on the Atkinson cycle, which like the eponymous diet, cuts down on consumption. Additionally, a continuously variable automatic transmission (CVT) takes the place of last year's conventional automatic. A 6-speed manual will be available on certain trim levels, too.

Surprisingly, it's the transmission that sets the Forte apart from its Hyundai Elantra sibling that sticks with conventional automatics. Kia says that it expects a 35 mpg combined fuel economy figure with the new CVT, which is exactly the same number the EPA applies to the Hyundai Elantra with its 7-speed automatic and downsized 1.4-liter turbo-4.

Kia finally makes advanced safety tech available in the Forte. On the options list—not standard as in the Toyota Corolla and Mazda 3—is a suite of features that include automatic emergency braking, blind-spot monitors, active lane control, and adaptive cruise control.

For now, Kia's staying mum on prices, but we should know when the car goes on sale later this year.

For more vehicle debuts the 2018 Detroit auto show, head over to our dedicated hub.