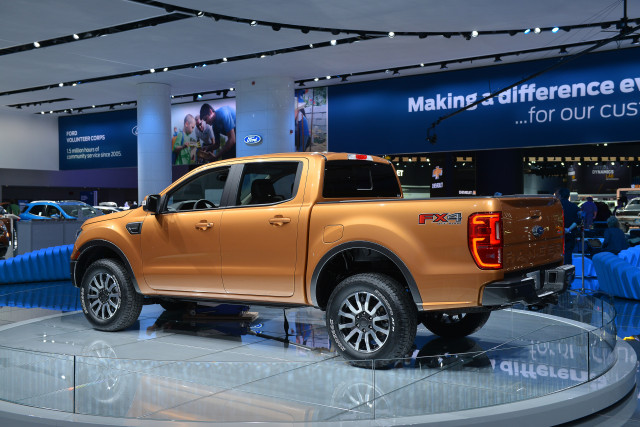 It's hard to believe that Ford, the truck leader for four decades, hasn't had a mid-size pickup since 2011. Well, now the Ranger rides again.

The Ranger never actually went away. Our Ranger is actually based on a global truck that's been around since 2009, but Ford has beefed it up for our North American tastes.

Under the hood is one powertrain and it's pretty potent. It's a turbocharged 2.3-liter 4-cylinder mated to Ford's new 10-speed automatic. Ford won't tell us how much power it makes but says it will be on par with rivals' V-6s. With a turbo-4 and a 10-speed, you can bet that fuel economy will also be at or near the top of the class.

Rear- and 4-wheel drive with low-range gearing will be offered, and it all sits on a high-strength steel ladder frame. Double wishbones up front and parabolic leaf springs at the back keep the wheels planted. Ford also hasn't shared a max towing number, but says the Ranger can tow campers, watercraft, or ATVs.

When it goes on sale early next year, buyers will choose from SuperCab and larger SuperCrew body styles. A tough FX Off-Road package will be available for rear- or four-wheel-drive Rangers that adds skid plates, knobby tires, off-road-tuned shocks and suspension, a Terrain Management System like you get in the F-150 Raptor, and a new Trail Control system that acts like low-speed cruise control for tricky off-road situations.

Inside, the Ranger is pretty civilized, offering leather upholstery, and an 8.0-inch touchscreen that hosts the Sync 3 infotainment system, with Apple CarPlay and Android Auto compatibility. A Bang and Olufsen sound system will be available, and an in-car wi-fi hotspot will keep everyone connected.

Ford isn't talking pricing for the 2019 Ranger yet, but we should know more when the Ranger saddles up in early 2019.