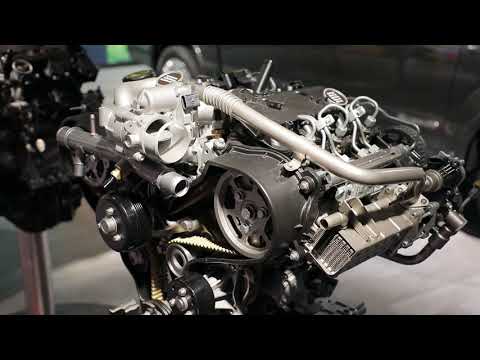 This week, details about the diesel 2018 Ford F-150 were made available months after the automaker confirmed they would offer the engine in their best-selling pickup. It’s the sixth engine available in the 2018 Ford F-150 in addition to four V-6 engine options and one V-8.

When it goes on sale this spring, Ford will offer a 3.0-liter Power Stroke turbodiesel engine in the F-150, the first time in the pickup’s 70-year history for a diesel engine under the hood.

The engine should appeal to frequent towers and long-haul drivers with improved capacity and range. Ford said the 250-horsepower 3.0-liter diesel engine would be rated to tow up to 11,400 pounds and its range may reach up to 780 miles on a single tank of diesel fuel.

Although diesel’s popularity with general carbuyers has rapidly declined over the past few years—just nine diesel-powered passenger cars are available so far in 2018, down from 22 in 2015—truck buyers have clamored for the engine option in light-duty trucks and are seemingly willing to pay for it. The diesel F-150 will join the General Motors Chevrolet Colorado/GMC Canyon mid-size pickups and the full-size Nissan Titan XD in offering a diesel. Ram has offered a diesel engine in its full-size Ram 1500 before but it’s unclear if that will return for 2018 after regulators accused the truckmaker of not disclosing certain emissions controls.

“I would have never imagined in the past of getting 30 mpg on the highway in a medium-sized truck with this capability,” Felipe said. “Now is the right time because we’ve never had this combination of aluminum construction and 10-speed automatic transmission…we could have done diesel years ago, but it wasn’t the right time.”

Like other truckmakers, Ford will treat the diesel F-150’s emissions with AdBlue, or urea-based after-treatment, from a 5.4-gallon tank that will need servicing every 10,000 miles. The diesel F-150 will sport a 26-gallon diesel fuel tank that, when combined with a 30-mpg anticipated highway range, could net up to 780 miles of driving range.

The new Ford F-150 diesel engine will be sourced from the automaker’s Dagenham, U.K., plant that already produces a similar engine for Land Rover that’s already on sale. Although the 3.0-liter found under the hoods of some Land Rover SUVs is similar to the F-150 unit, engineers from Ford said their diesel engine for the F-150 will have key differences including an uprated turbocharger and higher-pressure fuel delivery.