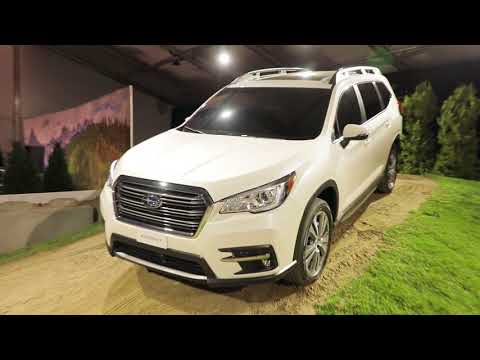 The automaker famous for building rough-and-tumble wagons and crossovers ready for off-the-beaten path missions is tackling another famously treacherous task: family duty. The 2019 Subaru Ascent was officially unveiled Tuesday ahead of the 2017 Los Angeles auto show, and it potentially delivers the rapidly expanding carmaker into more suburban homes.

The new Ascent is the largest vehicle the automaker has ever built, even bigger than the B9 Tribeca (later just Tribeca) a of 2006-2014. It will be assembled at Subaru's production facility in Lafayette, Indiana, and go on sale in early summer 2018. Pricing hasn't yet been announced.

DON'T MISS: Read our preview of the 2019 Subaru Ascent

Family friendly features will include wide-swinging rear doors for easier access to the third row, available wi-fi hotspot capability, Android Auto and Apple CarPlay compatibility, and a standard 6.5-inch touchscreen that can be upgraded to an 8.0-inch touchscreen.

Like many other family crossovers, the Ascent will boast a full complement of active safety features that are becoming nearly universal on big haulers. The Ascent will be equipped with the automaker's EyeSight safety suite that includes forward collision warning with automatic emergency braking, adaptive cruise control, and active lane control. A new head-up display will relay information to the driver, and Subaru will offer a camera-based rearview mirror (similar to Cadillac's system) to help outward vision. A forward-facing camera will be available on top trims of the Ascent to help park the vehicle.

The Ascent will be powered exclusively by a new turbocharged 4-cylinder engine mated to a continuously variable transmission (CVT), with all-wheel drive standard on all models. The new engine is a 2.4-liter turbo-4 that makes 260 horsepower and 277 pound-feet of torque. The CVT will simulate eight "gears" during heavy acceleration, but is mostly used to keep the 2.4-liter turbo-4 at its most efficient. Subaru hasn't yet announced expected fuel-economy figures for the new Ascent. When properly equipped, the Ascent will tow up to 5,000 pounds.

When it arrives next year, Subaru will offer the Ascent in base, Premium, Limited, and Touring trim levels. Base models will be equipped with 18-inch wheels, four USB ports, a 6.5-inch touchscreen, cloth upholstery, Apple CarPlay/Android Auto capability, three-zone climate control, and the EyeSight safety systems. At the top, Touring trim levels will get leather upholstery, heated and cooled front seats, woodgrain trim, an 8.0-inch touchscreen with navigation, a Harman Kardon sound system, and front- and rear-facing cameras for outward vision. Rearview cameras will be standard on all trims. Most trim levels will offer heated front- and second-row seats as part of a cold weather package.