Something in the air: 2019 Infiniti QX50 crossover SUV revealed 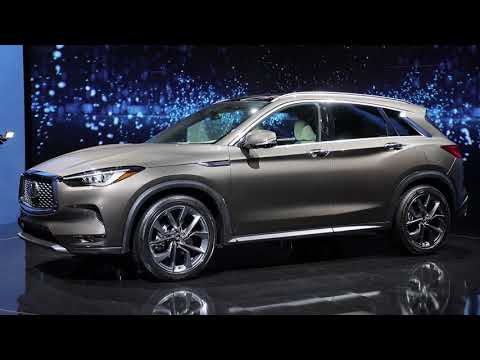 Infiniti needs a lot of "firsts" these days. The relatively nascent luxury brand may be looking for a new flagship with more technology, a defining sedan or crossover to shape the automaker's mold going forward, or a new powertrain to cement its status as a forward-thinking, fuel efficient marque.

We just didn't expect all of the above to be rolled into one.

The 2019 Infiniti QX50 broke cover while most of us napped in a turkey-induced slumber. The new crossover SUV headed to the 2017 Los Angeles Auto Show broke cover Thursday night.  The crossover sports a host of "firsts" including a new front-drive platform, Infinit's first application of semi-self driving technology, and a variable-compression engine to maximize fuel economy.

The QX50 will sport Infiniti's first use of its semi-autonomous driving software, dubbed "ProPILOT Assist." The system has already made its debut on the Nissan Leaf electric car (that we've driven), and will make its way to the Q50 later this year. ProPILOT Assist combines active lane control with adaptive cruise control to drive the crossover down highways with driver attention in stop-and-go traffic and long-distance slogs.

Underneath the more upright sheet metal of the QX50 is a new front-wheel-drive platform for Infiniti, a fundamental shift from the outgoing model that was based on a rear-wheel drive platform. The new QX50 borrows much of its look from the bigger, three-row QX60, including a chromed kink near the rear roof pillar and a more upright trapezoidal grille up front. The new QX50 loses its rear-wheel-drive proportions, but gains roughly 20 percent more cargo volume behind the second row.

Under the hood of the new Infiniti QX50 will be the automaker's revolutionary variable compression 2.0-liter turbo-4 that maximizes fuel economy and low-end torque, depending on driving conditions. The technology, which was announced last year, will mean that the QX50's engine can constantly change the engine cylinder's compression ratio depending on circumstances. At low speeds, the 2.0-liter turbo-4 can make up to 280 pound-feet of torque for better low-speed power delivery. At higher speeds, Infiniti says the new QX50 will manage up to 27 mpg combined on the EPA cycle, a marked improvement over the outgoing model's 20 mpg combined rating.

The 2019 Infiniti QX50 should make its debut at the 2017 Los Angeles Auto Show later this month.