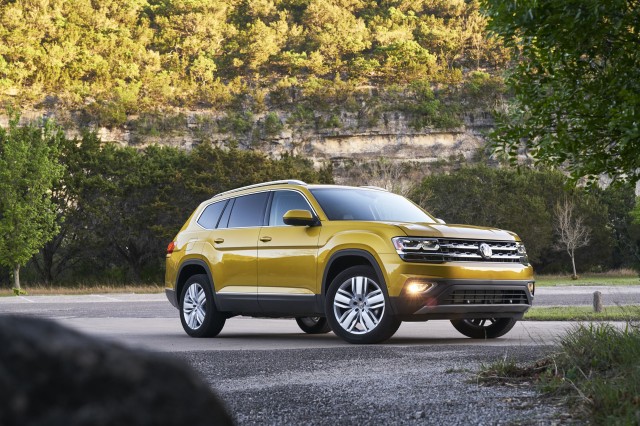 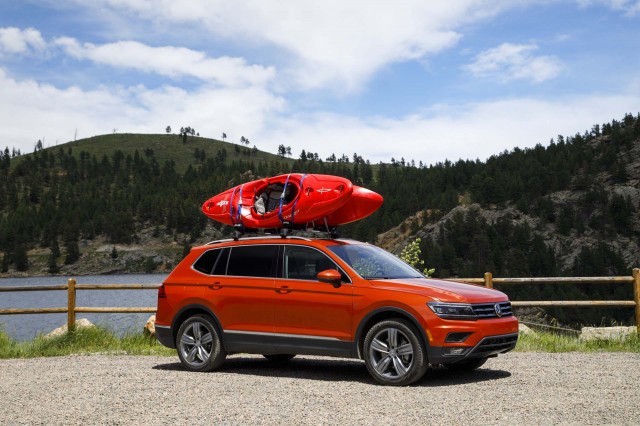 For what may be the first time since its dealers peddled the now-iconic Microbus, Volkswagen has a family-friendly vehicle with three rows of seats.

But wait,there’s more. The 2018 Volkswagen Atlas and 2018 Volkswagen Tiguan are new designs with room for up to seven passengers. The full-size Atlas is positively palatial inside, but it’ll take up most of your garage. The compact Tiguan is maneuverable in tight spaces and plenty roomy for four passengers, but its available third row is a kid-only affair.

Compromise is king, but we commend VW for finally filling its showrooms with the kind of crossovers American buyers want. In our ratings, the Tiguan wins out for its superior value, good fuel economy, and wider safety feature availability. The Atlas scores well for its roominess, but its interior isn’t noticeably more upmarket than the much cheaper Tiguan’s and it guzzles as much fuel as larger SUVs. 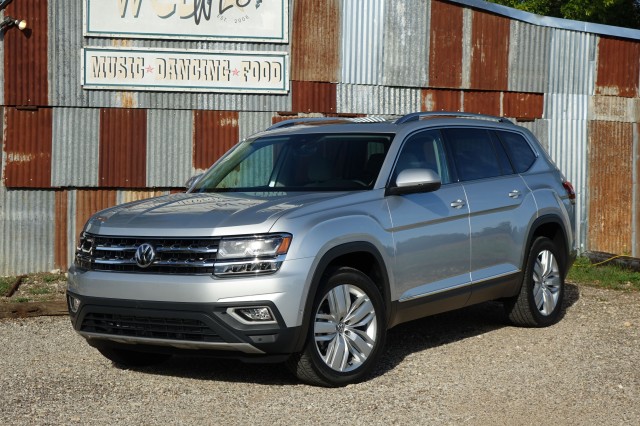 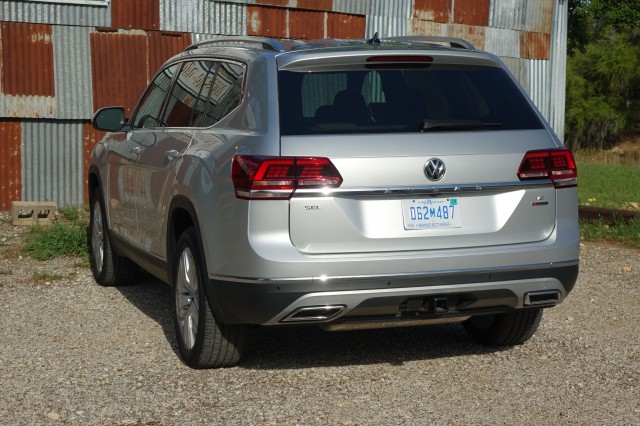 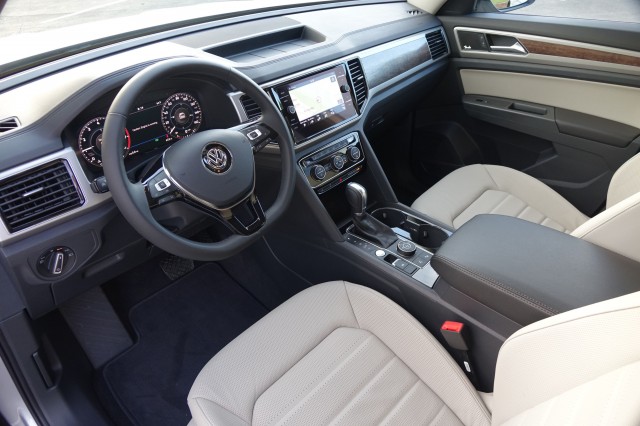 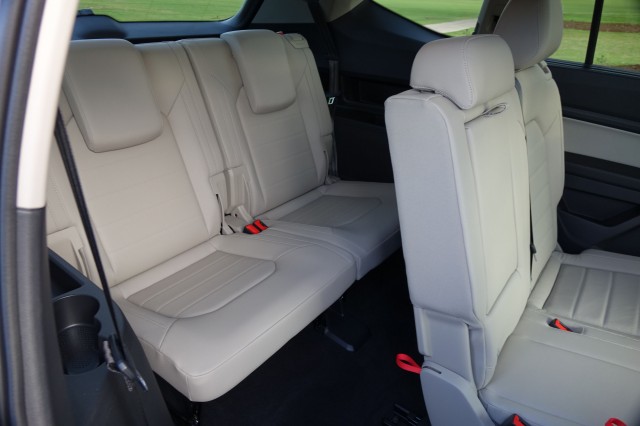 Let’s start with the similarities. Both crossovers have a clean, crisp, unadorned look that eschews the high belt lines and wacky roof pillars showing up on so many rivals. Neither one will get your attention compared to, say, a GMC Terrain or a Nissan Murano, but that’s not necessarily a bad thing.

We think the Atlas, with its broad shoulders and pronounced, chunky flares tries harder—even if it doesn’t always succeed. The Tiguan is simpler, if a little odd in profile with its extra-long rear door—a design cue that’s hard to hide but pays off in rear-seat leg room.

Inside, both crossovers are a festival of straight lines and logically arrayed controls. Curiously, the Tiguan generally uses nicer interior materials despite its substantially lower price tag. The Tiguan’s standard cloth seats are all-day comfortable, while the synthetic leather included on SE and SEL trim levels is durable and should be easy to clean when life happens. Leather is available on the range-topping Tiguan. Row two is a little tight for three abreast, but outboard passengers will find extensive leg space. The seat tumbles forward for access to a third row that’s curiously standard with front-wheel drive and a $500 option with all-wheel drive. Adults can squeeze back there, but only if they’re fine riding with their legs in their laps. With the third row upright, there’s precious little cargo space behind.

By contrast, the Atlas is full-size roomy for every seating position. Similar cloth upholstery is standard, with synthetic leather and real leather both on the options list. Up front, the view out is commanding. Massive rear doors open extra-wide for terrific access to the second row, making loading a child’s car seat easy. The standard third row folds flat when not in use and offers good space even for adults. As a bonus, a child seat can be left in the second row when it’s folded forward for access to row three, something few rivals can say. 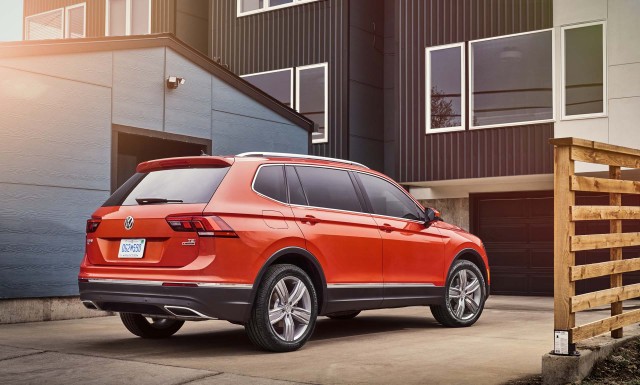 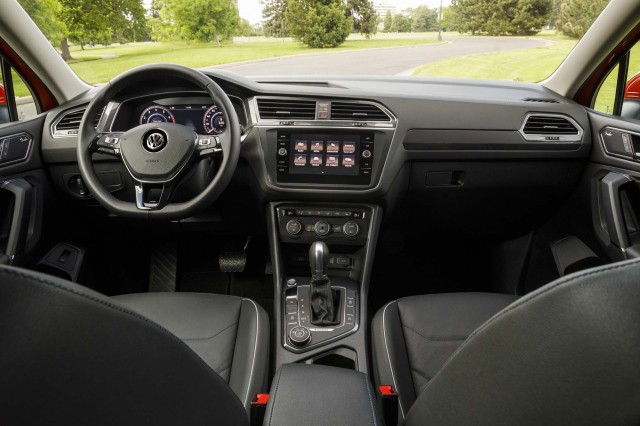 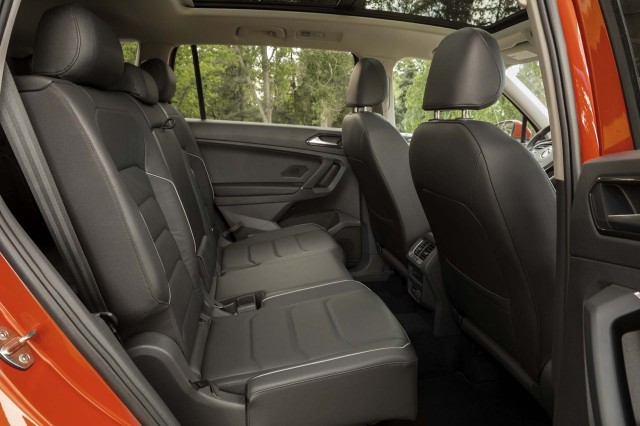 Neither crossover is particularly thrilling to drive, but both the Tiguan and Atlas ride comfortably and have light, accurate steering. Both crossovers come standard with 2.0-liter turbo-4 engines with different power outputs. The Tiguan’s 184 horsepower is adequate, but not rubber-burning, while the Atlas’ 235-hp output is more in line with its 4,500 pound curb weight. Optional on the Atlas—and required with all-wheel drive—is a 3.6-liter V-6 rated at 276 hp that provides more lively acceleration. Both crossovers use 8-speed automatic transmissions and both include several drive modes that modify throttle response, shift points, and steering heft.

With their low-riding, softly sprung suspensions, neither crossover is aimed at off-roaders. Around town, the Tiguan’s smaller size makes it far more nimble than the lumbering Atlas. Conversely, the Atlas tracks better at highway speeds and lets in less road rumble.

Given its smaller engine and lighter weight, it’s no surprise that the Tiguan is more fuel efficient. With all-wheel drive, it rates 23 mpg combined on the government’s test. The Atlas, when fitted with all-wheel drive, guzzles at a rate of just 19 mpg combined according to the EPA. Neither is frugal for its class, though—the Subaru Forester comes in at 28 mpg and the Honda Pilot earns 22 mpg.

Crash-test results for both crossovers have been good so far, with both crossovers earning a Top Safety Pick award from the IIHS. Neither boasts particularly good headlights, though.

In terms of on-board tech, the Tiguan earns extra points for its impressive value. The base Tiguan S trim level comes loaded with a 6.5-inch touchscreen infotainment system fitted with Apple CarPlay and Android Auto. Add in the optional automatic emergency braking and blind-spot monitors, plus all-wheel drive, and a Tiguan S will set you back less than $28,500. VW makes that essential collision-avoidance tech standard on the Tiguan SE, which adds fancier upholstery, an 8.0-inch infotainment system, and automatic climate control. Tiguan SELs go further with a power liftgate, a panoramic moonroof, and keyless ignition. All-in, a Tiguan SEL with the Premium package runs a hefty $38,450, but it’s almost a luxury car.

The Atlas’ equipment level is basically the same, with one major caveat: automatic emergency braking isn’t available until the SE with the Technology package, which runs more than $38,000 with all-wheel drive. Rivals like the Toyota Highlander and Honda Pilot make this important equipment available for thousands less. Tick all the boxes and a loaded Atlas runs more than $51,000, which is more than an Audi Q7.

In the end, it comes down to asking just what you need out of a crossover with a VW badge. If it’s space, the Atlas makes a strong case for itself. If the third row is an occasional-use item, at best, stick with the Tiguan. It’s our favorite among the two, but we’re thrilled that VW dealers finally have real options for family-haulers.

And if you’re patient, the Microbus is poised for a comeback in a few years as an electric van—just saying.

*As configured. Excludes taxes, title, license and other customary fees, such as dealer documentation fees, tire and battery disposal fees and, where applicable, finance charges. By clicking on “Get Your Price Quote Now”, you agree to our Terms of Use (including the Supplemental Terms) and Privacy Policy. You further consent to being contacted at the number you provided by CarsDirect and certain participating automotive dealerships, which may include autodials, text messages, and/or pre-recorded calls; this consent is not a condition of purchase or service. Message and data rates may apply.
Have feedback about this experience?
Let us know.
Tags:
2018 Compare Cars Crossovers Volkswagen Atlas News Volkswagen News Volkswagen Tiguan News
2022
The Car Connection
See the winners »
2022
The Car Connection
See The Winner and Nominees »