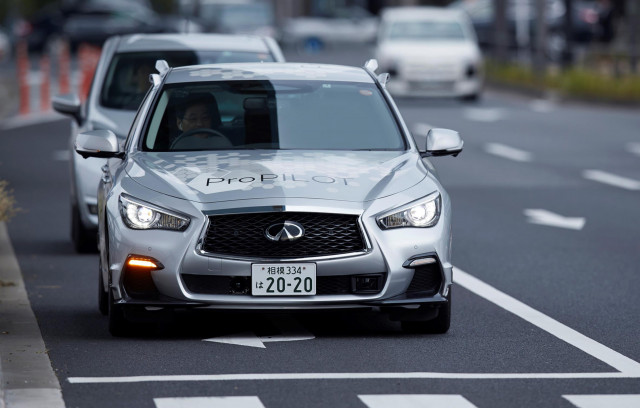 Nissan says its ProPilot self-driving technology will be ready to take over the majority of human driving responsibilities by 2020.

The automaker demonstrated the ProPilot technology with an Infiniti Q50 equipped with all necessary components. As the video shows, the Q50 was able to navigate not only highways but city streets as well. Today's current technologies make self-driving systems nearly inoperable around town.

ProPilot is the brand's name applied to its own self-driving technologies, but it currently includes features such as adaptive cruise control, automatic emergency braking and more under the ProPilot Assist name. Notably, the 2018 Nissan Leaf and Rogue will receive ProPilot Assist.

Nissan says the system can handle lane changes, intersections, merging, and also stop at toll booths when required. Powering the self-driving capability is a suite of cameras and sensors. Specifically, 12 cameras, nine millimeter-wave radars, six laser scanners, 12 sonars and a high-definition map feed data into an artificial intelligence (AI) system. The AI then analyzes the information in real time to control the car in a manner of comfort similar to humans, per Nissan.

Despite the capability the brand describes, it's not a complete self-driving system. The prototype ProPilot system sits at a Level 4 mark on the self-driving car scale, which ranges from Level 1 to a high of Level 5. Level 5 requires no human interaction or control whatsoever. Since the ProPilot system only works in certain conditions—light weather and in areas with HD mapping—it's not quite the robo car it aims to be just yet. In under three years? Nissan thinks it will be widespread, but whether that's through fleet testing or commercial technology remains to be seen.