Freightliner to test automated "tailgating" technology on US roads

It's basically tailgating in the name of eco-friendliness.

According to the company, successful tests have already been conducted both in Spain, and at Daimler Trucks North America’s Oregon-based proving grounds. Now, however, the trials will begin moving onto public highways, with permission from the Oregon Department of Transportation already in hand.

Scientific research into platooning began nearly a decade ago, with heavy European Union funding behind the now completed SARTRE program. 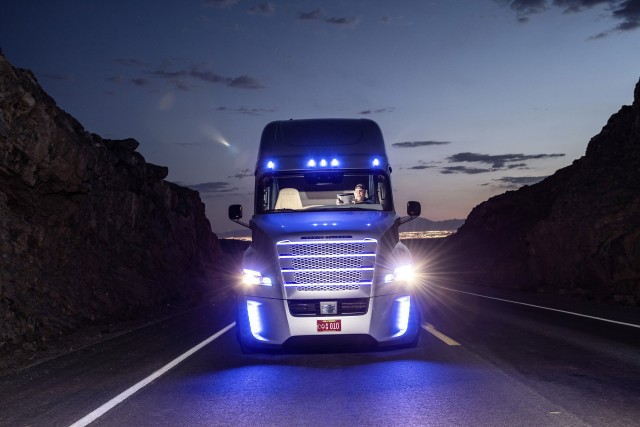 While the new Oregon tests will begin with two Freightliner trucks to test communication between the two vehicles, platooning is at its most effective when it includes a large group of vehicles.

The theory is that in a pack of trucks following very closely together at highway speeds — typically less than two feet, bumper to bumper — the lead truck pushes the air out of the way, and the others can follow with much less wind resistance. Thus, using the same phenomenon race car drivers use to gain speed on a race track, fuel economy is improved.

While this amounts to a form of extreme tailgating, the goal of Daimler’s test is to refine communication between the trucks to a point where the necessary safety margin is virtually zero. In other words, as soon as one truck is forced into an emergency maneuver, every truck in the convoy immediately follows suit, without needing to wait on human reaction time before taking action.

The benefits go beyond fuel economy, though. Highways with platooned trucks will theoretically be both safer and less clogged with traffic, since automated trucks will behave in much more predictable ways.

Daimler is hardly the only company working on platooning. Volvo Group — not to be confused with the car manufacturer — began testing the technology with the SARTRE program, and even companies like Tesla are working on next-generation self driving trucks that will be capable of platooning.