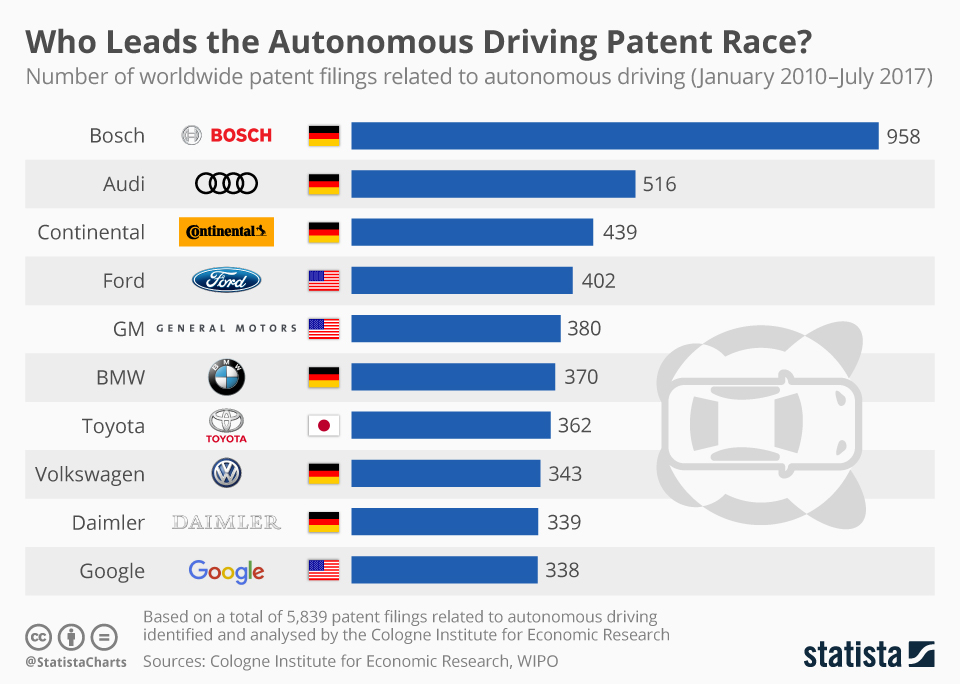 Who leads the autonomous car patent race? (chart by Statista)

Every few months, we learn a bit more about the state of self-driving cars and who's winning the race to bring them to market. Depending on the criteria being used, the rankings can shift pretty dramatically, as we can see in a new report from Germany's Cologne Institute for Economic Research.

That report looks at the number of worldwide patents related to autonomous vehicles that were granted between January 2010 and July 2017. In total, 5,839 patents were awarded, and German supplier Bosch holds significantly more of those than any other company in the field.

During the 7.5-year span studied, Bosch received 958 patents for self-driving car technology, giving it the top spot. Audi came in a distant second, with 516.

After that, the competition gets much closer. Third-place Continental received 439 patents during the study window, while tenth-place Google/Waymo received about 100 fewer, at 338.

It may or may not be worth noting that, according to the Cologne Institute's rankings, the field of autonomous vehicles is heavily dominated by German firms, with six of them in the top ten. The U.S. has three companies in the top ten, with Ford and GM in fourth and fifth place, respectively.

What do other reports show?

Of the three most recent reports on the burgeoning autonomous car industry, all use very different metrics.

In February, for example, the California Department of Motor Vehicles published data it had received from manufacturers testing self-driving cars on state roads. Those stats generated rankings that were the exact opposite of the Cologne Institute study.

According to Navigant, Ford was leading the race to bring self-driving cars to market, with General Motors hot on its heels. Waymo was further back in the pack, at number seven.

And now, we have the Cologne Institute, with a report on autonomous car patents that upends the rankings once again.

So, which is correct?

The field of self-driving cars is still in its infancy, so it's very, very difficult to predict which company will come out on top.

However, of the three studies mentioned here, we'd tend to give Navigant's rankings a little more weight.

The stats from California's DMV were interesting, to be sure, but they only show how vehicles are performing on California roads. Other companies may be testing elsewhere, and of course, autonomous car technology can improve exponentially thanks to partnerships or better code, leading to huge drops in failure rates in relatively short periods of time. In other words, the stats from California are a great snapshot of the industry, but given the narrow perspective, it's hard to make inferences about future performance.

The Cologne Institute's study is also interesting, but not necessarily telling. It's important to see that companies are filing and receiving patents, but patents don't always get used. They're often a protective measure--something to guard intellectual property that may seem useless now, but could become important down the road. (Case in point: Ford's patent for a car that can transform into a unicycle.)

So, for the time being, we think Navigant offers the most telling analysis of competitors in the self-driving car arena. The firm's study considers a wide range of variables that includes not just autonomous technology, but also the means to implement it and to distribute and sell self-driving cars. Future studies using similarly broad criteria will help to confirm or refute Navigant's accuracy.