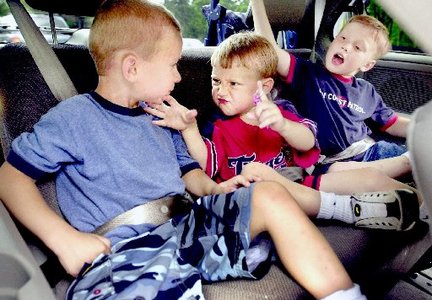 Kids buckled up in the back seat

Since 1998, more than 700 children have died from heatstroke as a result of being left in a hot car. According to publicly available data, over half of these deaths are the result of the driver simply forgetting about their passenger. To combat this ongoing epidemic, there are bills under consideration by both the House and Senate that would require automakers to include an audible reminder for drivers to check the rear seat for passengers.

Similar reminders are already available in some GM and Nissan vehicles, which monitor rear door use in determining whether to trigger a warning to the driver.

MORE: Do you really need a three-row crossover?

The cleverly-named “Helping Overcome Trauma for Children Alone in Rear Seats Act”, or HOT CARS Act, is still in the committee stage, and has a long way to go. Skopos Labs, which made headlines earlier this year for successfully using artificial intelligence to predict whether a bill will be successful, gives HOT CARS a less than four percent chance of passing.

The act itself allows a period of four years before such a mandate must be implemented—two years to develop the rule, and an additional two to implement it. However, progress in similar issues in the past has taken quite a bit longer. Trunk release handles, for example, were first considered by the government in 1984, but it wasn’t until 1998 that legislation was passed, and cars weren’t required to have such a handle until the 2002 model year.

The reason, in part, was because scientific research was still ongoing to determine the best way to develop the handle. Similar research is currently underway, as engineers and psychologists work to assess the most effective ways to remind drivers about backseat occupants.

One of the leading researchers in the field is a proponent of rear door-activated warnings like those found in the GM and Nissan systems. However, finding the right approach to legislation won’t be so simple. It wouldn’t work, for example, with a two-door car, and considerations would need to be made for a variety of human psychological responses to chimes and warnings.

Even if it the HOT CARS Act does pass, it could take a long time before such systems feature in every single car.