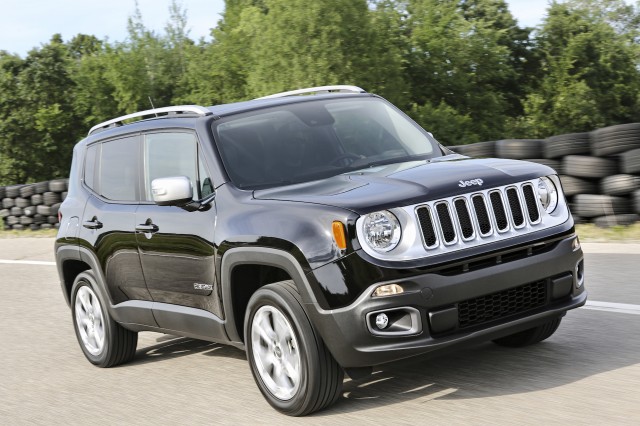 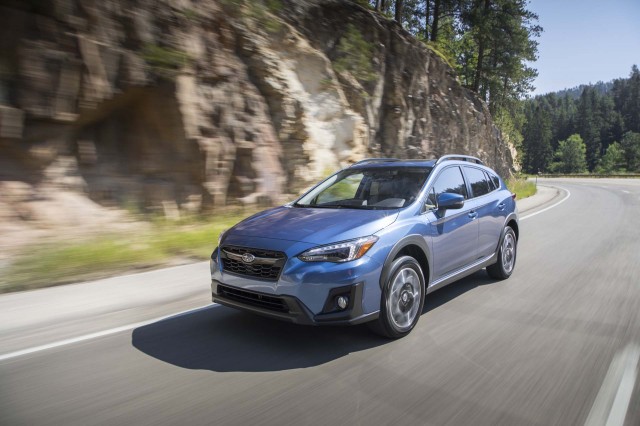 The 2018 Subaru Crosstrek and 2017 Jeep Renegade are two popular compact crossovers with the same mission: fun in the sun. Both crossovers aim for younger buyers who could pitch a tent blindfolded. With one hand. In a rainstorm. In less than 5 minutes.

What we mean is, both the Crosstrek and Renegade are the types of cars you'd expect to find in the parking lot at REI. They're both as useful as a well-made backpack, but only one gets our nod as the pick to hit the trails this year.

The new 2018 Subaru Crosstrek nets a 7.0 on our overall scale, while the Jeep Renegade manages a 5.3. That's a fairly wide margin on paper, but the competition is closer than that in reality. That's because the Renegade has a wider range of models from which to choose that are less expensive; the Crosstrek costs more at the outset, but is better prepared for the contest. (Read more about how we rate cars.)

MORE: Read our reviews of the 2017 Jeep Renegade and 2018 Subaru Crosstrek 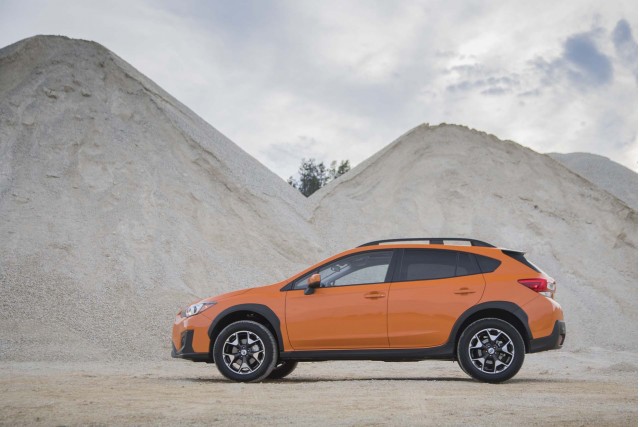 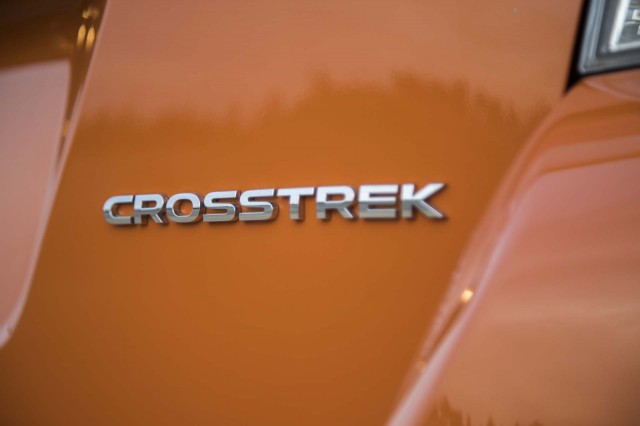 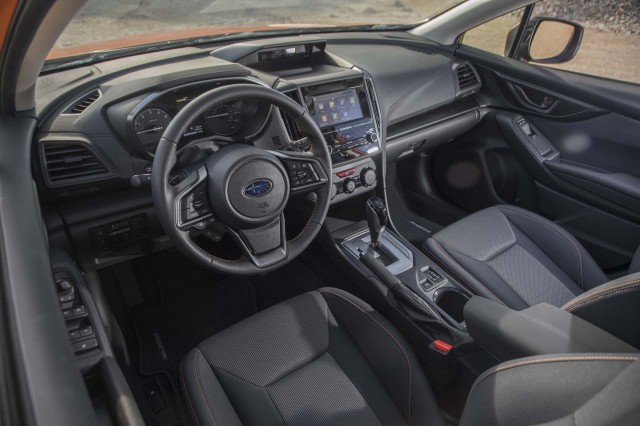 The Jeep Renegade was new for 2015 and is the smallest Jeep sold in the U.S. since the Willys launched, post-World War II. The Renegade leans heavily on parent-company Fiat Chrysler Automobiles for parts and is related to the Fiat 500X, which shares its running gear. The Jeep's quirky exterior style and boxy approach somewhat recall the weirdo Honda Element, which was a surprise hit for older drivers. Empty-nesters may not take to the Jeep's interior in the same way, though. Designers placed high-contrast, "look at me" gear everywhere inside including hidden "Easter eggs" with Jeep logos, colored plastics, a "paintball-splattered" gauge theme, and central air vents that remind us of the main character from "Wall-E."

The Crosstrek takes fewer risks than the Jeep, which may be less grating as years go on.

Inside, both are functional hatchbacks with room for four with plenty of gear. The Crosstrek's opening has been made slightly wider for 2018, but more rear seat room has eaten into cargo space slightly. The Crosstrek holds 20.8 cubic feet of gear with the seats up and 55.3 cubes with the seats down.

Both boast a surprising amount of capability off-road, but only one of them offers it as standard.

The Subaru Crosstrek is new this year with "X-Mode" that was cribbed from the Forester. It's a hill-descent program that can modulate the Crosstrek's speed down a sharp decline, temper twitchy throttle inputs, and lock the continuously variable automatic transmission (CVT) into a lower range, all useful features when off-roading. The Crosstrek also features 8.7 inches of ground clearance and Subaru's standard all-wheel-drive system that varies slightly between automatic- and manual-equipped models, but keeps all the wheels going nonetheless. 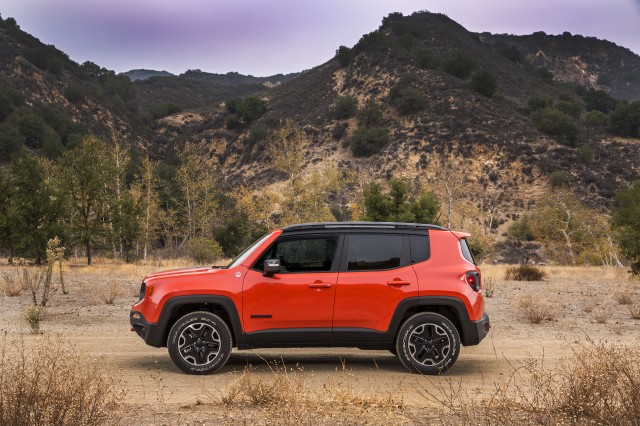 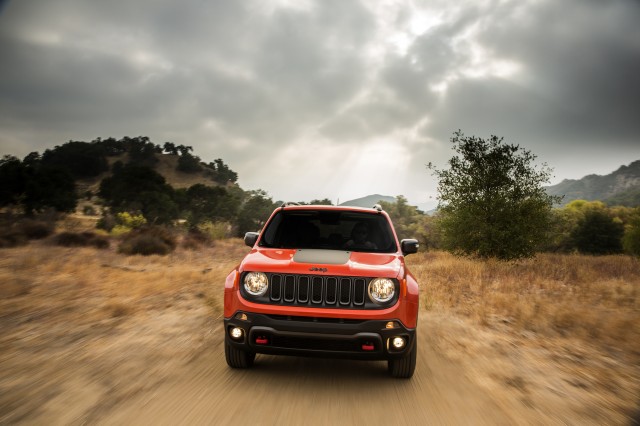 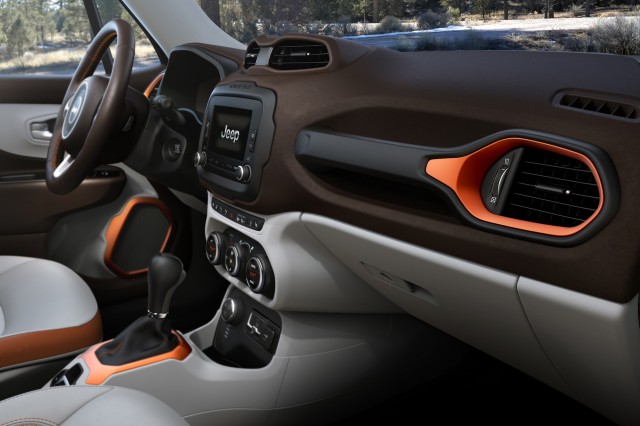 The Jeep Renegade also features a hill-descent control and 8.7 inches of ground clearance, but it's not standard. To get the tallest Renegade requires opting for the Trailhawk trim level, which starts at nearly $28,000. Standard front-drive Renegades have 6.7 inches of ground clearance and all-wheel-drive versions that aren't called Trailhawk have 8.0 inches of clearance. Jeep's Renegade has a SelecTerrain system that can dial in different throttle responses and transmission behavior between Snow, Sand, and Rock settings, and it has a simulated low-range gearbox with a 20:1 crawl ratio.

The Jeep may have more off-road chops, but that's provided you're willing to pay for them.

Both Crosstrek and Renegade offer 4-cylinder power, although only Jeep gives you an option. The Crosstrek comes standard with a flat-4 that makes 152 horsepower this year, mated to a 6-speed manual or CVT. It's hardly powerful, but it's adequate and on-par with the class.

The Renegade offers a choice between a turbocharged 1.4-liter inline-4 or a 2.4-liter inline-4 that make 160 hp and 180 hp respectively. Both may sound like an improvement on the Subaru's powertrain, but the 1.4-liter is only offered with a manual transmission and it feels burdened when coupled with all-wheel drive. The 2.4-liter may be more powerful (and it's the only way to get a Trailhawk model) but it's saddled with a 9-speed automatic that we just can't get behind. In other applications the 9-speed feels better, but we've noticed that the inline-4 and 9-speed combo just hasn't been solved yet by Jeep.

Both ride fairly well for crossovers, and we were surprised by the Jeep's quiet interior given its boxy shape. The last Crosstrek was noisy and unrefined inside (made better in years following its 2013 debut), and Subaru has taken large steps to quell that noise. The new Crosstrek is as quiet as many other crossovers on the market, and feels softer than prior years.

The Crosstrek outpoints the Renegade in fuel economy, 29 mpg combined vs. 24 mpg combined, when comparing off-road models. Opt for a front-drive Renegade and you might do better, but neither Crosstrek nor Renegade are tops in their class for fuel-efficiency. The Honda HR-V takes that prize, although it's not as useful off-road.

The Jeep Renegade undercuts the Crosstrek in price, but when comparably equipped, the Subaru starts to present a good value proposition. Although the differences in overall scores may be dramatic, the gap narrows when we start to consider comparable models—not ones built to a low, low teaser price.

The Renegade is quirky and fun, and represents a fresh take for Jeep. But the Subaru feels better put together, better equipped, and in mid-range trim, an excellent value.

5.3
Expert Rating
The 2017 Jeep Renegade is the smallest Jeep you can buy, appealing both to commuters and off-roaders, but its design can outshine its performance.
7.2
Expert Rating
The 2018 Subaru Crosstrek smooths over the edges that we didn’t like with the last version. It’s smooth, quiet, and capable—all good things because it won’t be rushed.

4.0
Expert Rating
Rear passengers may be cramped, but the Renegade's interior is flexible for cargo.
Read More
8.0
Expert Rating
Comfort isn’t the Crosstrek’s first mission, but it’s the one that’s most dramatically improved for this year.
Read More

6.0
Expert Rating
Spartan in base trim, there are a substantial number of ways to outfit the Renegade based on need.
Read More
8.0
Expert Rating
The 2018 Subaru Crosstrek makes a compelling value proposition in base models.
Read More

Front Wheel Drive Read Full Specs
All Wheel Drive Read Full Specs
Compare Free Dealer Price Quote
With competitive price quotes from multiple dealers, you will be prepared when you meet your local car dealer. Please tell us how to contact you so that dealers can compete for your business!
2022 Jeep Renegade
There are no Jeep dealers in our network that are located near the ZIP code.
2022 Subaru Crosstrek
There are no Subaru dealers in our network that are located near the ZIP code.
Thank you!
We have sent your request for price quotes on the 2022 Jeep Renegade and 2022 Subaru Crosstrek to the dealers you requested. They should be in touch shortly.
The Car Connection's dealer quote process is powered by our partner site CarsDirect.
Your request for a fast, free price quote on a 2022 Jeep Renegade and 2022 Subaru Crosstrek is in process. The CarsDirect Dealer(s) listed below will contact you shortly to discuss your request and to provide a quote. If you have questions now, you can contact the dealer(s) directly using the information provided below or contact CarsDirect's award-winning customer service team at 1.888.CarsDirect (1.888.227.7347) or [email protected]
For your reference, your customer transaction number is .
Tell us a little bit about yourself
Looking for dealers in your area...

*As configured. Excludes taxes, title, license and other customary fees, such as dealer documentation fees, tire and battery disposal fees and, where applicable, finance charges. By clicking on “Get Your Price Quote Now”, you agree to our Terms of Use (including the Supplemental Terms) and Privacy Policy. You further consent to being contacted at the number you provided by CarsDirect and certain participating automotive dealerships, which may include autodials, text messages, and/or pre-recorded calls; this consent is not a condition of purchase or service. Message and data rates may apply.
Have feedback about this experience?
Let us know.
Tags:
2018 Compare Cars Subaru Crosstrek News Subaru News
2022
The Car Connection
See the winners »
2022
The Car Connection
See The Winner and Nominees »