Virtual Reality showrooms will change how we shop for cars 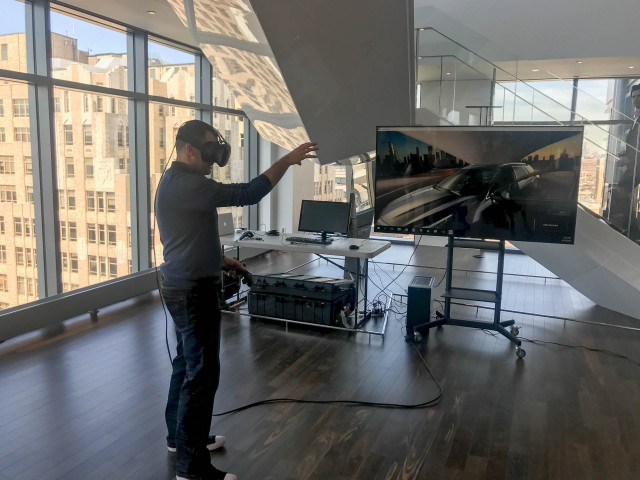 I felt ridiculous as the bulky headset slipped onto my head. It was something that felt right out of a 1980s movie about the future.

A controller was placed in my hand and I was given one simple instruction: Point where you want to go, click, and you'll be there.

I opened my eyes and was instantly in a Virtual Reality world. There was a blue Cadillac XT5 sitting what seemed like a few hundred yards in front of me.

Spinning my body around I could see wood floors under my theoretical body, and I was inside a "room" like nothing I've ever seen before. It was modern, bright, and futuristic, with large windows letting lots of "natural" light in to show off the vehicle's lines.

No, this wasn't some dream or movie I saw. I was getting a glimpse into the future of car buying in a prototype version of Cadillac's Virtual Reality showroom.

Once looked at as something straight out of "The Matrix," Virtual Reality is starting to become part of our every day lives, and it's going to change the way we shop for cars.

Automakers are investing in Virtual Reality technology to prepare for a shift in how consumers research their next vehicle.

The ability to virtually sit inside a car, walk around its exterior, and get an understanding of how large a vehicle is will soon come to your local showroom and even your living room.

More than ever, today's consumers can arm themselves with information thanks to the Internet.

With the research complete, buyers can now walk into a dealership to simply see a vehicle in the metal, confirm the experience, and then conduct the final transaction.

But that's today, and tomorrow is coming.

Automotive customers want more, and they want to do it on their time, on their terms, Skip D'Amico, Cadillac's global manager of digital innovation, told The Car Connection.

Automakers are investing today in the future shopping and buying experience. There will be a shift as Virtual Reality technology and hardware become more readily available.

Michael LaLande, director of Americas transportation and mobility at Dassault Systèmes, one of the companies developing the Virtual Reality systems for automakers, said, "The automotive buying experience is continuing to evolve, and VR will play a role in this. Consumers are looking for, and want, a way to touch and experience these cars outside of a showroom.”

In addition to Cadillac, Audi, Toyota, Mercedes-Benz, and other automakers are working on Virtual Reality technology to aid the buying experience.

“If you want to be in the game when VR really takes off, especially in the home, you have to be creating and developing it now," said D'Amico. "All of this will be the groundwork of things to come."

Just because everyone's working on Virtual Reality doesn't mean each automaker's experience will be the same.

There's no rule book for Virtual Reality experiences, or expectations that must be met. D'Amico told us: "It's virgin territory. Everyone's learning on the fly as we go, which is what makes it so exciting."

Think of this as the wild west of the tech sector, but with fewer saloons being shot up.

I experienced the future

Back to my experience in Cadillac's Virtual Reality showroom.

After getting acquainted with my surroundings I raised my hand holding the controller, pointed next to the car, clicked the button, and poof! I was instantly teleported to the spot I had pointed to.

Suddenly I was right next to the XT5. I was able to read the lettering on the tires, look at the light pipes in the door handles, and examine the details inside the headlights.

I pointed the remote inside the glass, clicked, and was immediately transported inside the XT5. Suddenly I had a very real sense of how large the rear seat is, and how far away the dashboard is from me in the front seat area. I could see Cadillac's CUE infotainment interface, and it felt as if I could reach out and change the volume on the touch-based system.

Outside of touching the materials on the dashboard, I was able to get a real sense of what the XT5 looks like in the metal, and experience the size of it. More importantly, I could theoretically do it all from my home.

There are limits. This was a prototype version of Cadillac's Virtual Reality environment. If I tried to wander too far away from the car, green lines would appear creating a barrier I couldn't move beyond.

Being a prototype, the final version of Cadillac's Virtual Reality environment will have some minor tweaks from what I experienced. When you reach the edges of the virtual environment, you won't see the neon green lines. Perhaps you'll run into the lines that define the walls of the "room" you are in. There might even be paintings on the walls with happy little trees.

How this plays into the future

One could argue we are headed toward a day when dealerships don't need to exist, but that would be shortsighted to make such a blanket statement.

Dealerships will continue to exist, but in what capacity, is the question.

"There are some things you'll never be able to replicate with VR, such as the sound of a door closing...but in terms of viewing a vehicle, we are nearly there," LaLande said.

Sure, feeling a door close can't be replicated virtually, but LaLande noted sound can be added.

D'Amico feels that customers simply aren't comfortable making such a large purchase without some tactile moment with the machine. Buyers want to touch it, smell it, see it, and experience it in real life.

But if some customers don't care about having a tactile moment with the machine, this could be the point of a major shift.

A shift to subscriptions

Automaker's are setting up a future in which one might simply subscribe to a brand, pay a monthly subscription fee, and have a car. The customers could then swap out the car, for a price, for something larger, more sporty, or more luxurious on the fly to meet their needs.

Cadillac's already offering this vehicle subscription concept in the form of BOOK in the New York Metropolitan area, but it's set to expand to other major cities over time.

Mark Boyadjis, principle analyst manager of automotive experience at IHS Markit says the Xerox model shift, from buying to paying to rent and receive service, is coming to the automotive industry. "The reality is, that same transition is coming to the automotive industry. The average model car costs over $33,000. That's just not in the cards for today's customer, especially millennials," he said. "With this kind of pressure in the system, we'll see consumer demand shift, particularly in an urban and large metropolitan area where parking, insurance, and gas prices are simply too much," Boyadjis continued.

"Ford, Toyota, and other automakers are all investing today in back end systems. They are setting up the structure for future sustainability," Boyadjis said, "it's a shift being driven by consumers."

In a world in which you subscribe to an automaker, the dealership might simply become a vehicle staging location, delivery service, and service station for vehicle maintenance.

"Ironically, dealerships might balk at this, but the reality is there's far more profit in servicing vehicles and selling used cars than there is today in selling new vehicles," Boyadjis said. "Changing the model from sales and service to becoming a service station on steroids and fleet management presents a huge opportunity."

Today and then tomorrow

Vehicle sales and the current ownership model isn't shifting today, but the groundwork is clearly being laid so that this shift can take place when the market demands it.

Cadillac's planning on launching its VR experience this fall. It's not mandating that dealerships participate, but one can easily see how it might become a dealership requirement at some point in the future. Upon launch, it'll be opt-in for dealerships, and you'll certainly see it in pop-up situations at events such as art fairs, events, and possibly even the mall. Eventually, consumers will be able to experience it in the comfort of their own homes.

The technology will continue to evolve. Today's VR setups have some restrictions such as not being wireless and not being in enough homes, D'Amico told us. But like all new technology, both of these hurdles will vanish over time. Some of today's smartphones can already be clipped into headsets and turned into a VR setup, and this will only become more commonplace.

When asked if VR could eventually take the dealership visit out of the equation in the buying process, LaLande told said, "Yes, but it might take a little while to get there. People will need to get used to the idea of not seeing actual vehicles in the showroom environment. The consumer’s going to have to make some transition in how they perceive a dealership experience should be.”

Most of all, this will be driven by market demand. This shift won't happen over night, but the writing is on the wall. Automaker's are treading lightly as dealers no doubt have to buy into the idea and implementation of vehicle subscription services.

Boyadjis said, "When you aren't owning a vehicle in the future, and it's a service, the product won't be as important as the service and experience. So if you can create a terrific experience that can be brought into the customer's living room, then you'll be able to start to bring the experience you want to the end user where they are. That'll be an important piece to the end buyer in the future."

This lined up with what D'Amico told us in terms of why Cadillac's even working on VR in the first place, "A huge push to doing VR is providing that access," continuing with, "This isn’t a VR showroom. It’s Cadillac in Virtual Reality. It’s meant to augment, another way to experience the vehicles. Simply another way to see the cars."

Virtual Reality will clearly be a key piece of technology in helping consumers decide on their next vehicle during the buying, and eventually, possibly the subscribing, process.