OPEC thinks the electric car revolution is upon us, too 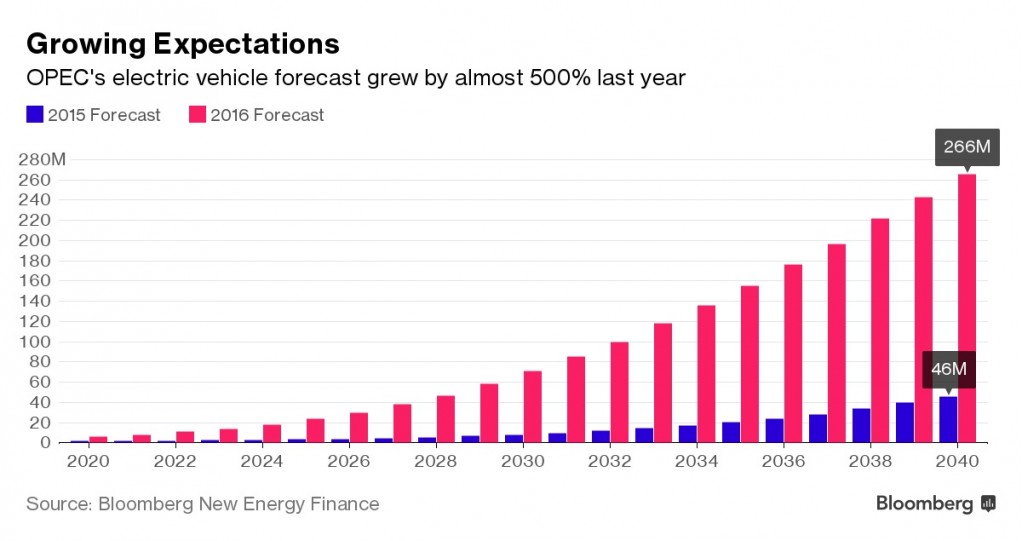 A couple of weeks ago, we wrote about a new report from Bloomberg New Energy Finance, which suggested that the electric car revolution may happen far more quickly than anyone expects. In 2016, BNEF's team of analysts thought that by 2040, 35 percent of the world's new cars would run on electricity. Now, they think it'll be closer to 54 percent.

Some of you probably found that figure far too optimistic, but you know who didn't? The Organization of Petroleum Exporting Countries, better known as OPEC.

According to BNEF, OPEC now believes that sales of electric vehicles will be five times stronger than previously estimated. Just last year, OPEC predicted that by 2040, 46 million electric cars would roam Planet Earth's roads. This year, that number has been revised upward to 266 million.

And OPEC's not entirely alone. Private oil companies like BP and Exxon are keeping an eye on EVs, too. Though their outlooks are dimmer than OPEC's, both companies project that the world's fleet of EVs will surpass the 100 million mark sometime between 2035 and 2040. As with BNEF's own analysts, those revised numbers stem largely from the rapidly dropping price of lithium ion batteries.

If those projections bear out, by 2040, demand for oil could plummet by eight million barrels a day. That's about what the U.S. currently produces in a day, or roughly the output of Iran and Iraq combined.

The big question, of course, is whether the projections are accurate. And even if they are, what effect might they have?

Though the numbers seem huge and the revised estimates appear significant, a drop in oil production of eight million barrels wouldn't devastate the petroleum industry. Companies and governments currently churn out about 96 million barrels of oil each day. Cutting eight million barrels from that total would be a noticeable drop, and it might be enough to cause stagnation in the oil industry, but it wouldn't be a death blow by any means.

Furthermore, OPEC's projections related to electric vehicles are definitely at odds with BNEF's. OPEC believes that by 2040, electric cars will make up just 12 percent of the world's auto fleet. BNEF believes the figure will be nearly three times higher, at 33 percent.